Traffic congestion presents a challenge around many schools during their arrival and dismissal periods. Analyzing traffic patterns and driver movements during these peak times from the ground affords the reviewer a glimpse of the area and the potential driving forces behind the traffic conflicts, but only tells part of the story. Utilizing drone (aka Small Unmanned Aircraft System (sUAS)) imagery goes beyond the traditional ground traffic counts in that the videos capture driver and pedestrian decision making. Habits, trends, patterns, causes, and consequences (things that vehicle number counts alone can’t tell you) can be crucial in developing wholistic solutions for complicated traffic problems. The Daoulas School Complex in Dracut, serving 2,800 students and 326 faculty and staff, is a prime example of a location where using visual data is playing a key role in traffic congestion problem solving. 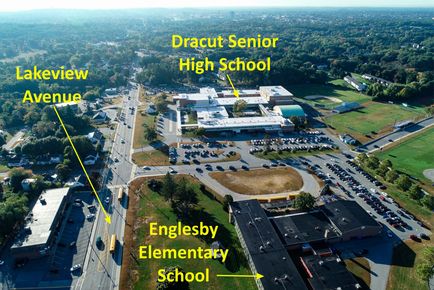 The complex is comprised of four schools – two elementary, one junior high, and one senior high – which are accessed by a main drive off of Lakeview Avenue.  The drive extends the entire length of the campus connecting these schools with bus access roads, and over 400 parking spaces spread over 7 parking lots. The school system allots 174 parking passes for students, and the remainder are for faculty and staff. Of the remaining students and faculty arriving on campus, over 800 are believed to be drop-offs, and the majority of the remainder arriving between the 22 standard buses or 24 mini-buses/vans, with a small handful arriving by walking or riding bikes.

The schools let in and out two at a time, separated by roughly an hour in both the morning and afternoon, causing four “rush” periods. During both morning rushes, heavy commuter traffic heading eastbound on Lakeview is routinely backed up by other eastbound drivers as well as those making a right turn into the complex to drop-off students (about 30% of the eastbound traffic during the peak hour or approximately 250 vehicles); thus, there was a call for adding an eastbound right turn lane to alleviate congestion caused by the turning traffic. Because drivers were already creating a right turn lane by using the paved shoulder, the Town Engineer had an indication that the problem was starting on the campus itself.

To better understand the traffic movement on campus, Hoyle, Tanner recommended using drone observation over traditional traffic counting sensors due to the high number of access points (7 within the first 600 feet of the main drive) which allow the drivers to create their own routes and varying traffic patterns throughout the abutting parking areas. The drone footage did not disappoint.  Using drone flights at two different vantage points captured the morning and afternoon rush periods and provided invaluable data. The drone pilot observed that even innocuous driving patterns presented challenges. Some of the conflicts observed included:

The video footage was reviewed, summarized, and presented to the Town and school stakeholders as part of a preliminary discussion, and helped guide the group in identifying safety concerns, traffic conflicts, and proposed solutions. The footage made it clear that beyond any physical site improvements, a behavior change would also be necessary. An outreach campaign consisting of fliers, conversations, and on-campus guidance was proposed to help both drivers and pedestrians understand why the new measures were being implemented and how changing their habits would improve safety and traffic circulation both on and off campus.

The video and discussion inspired several ideas on how to not only reduce traffic congestion but also improve pedestrian safety. Our proposed plans and recommendations included:

At this point, the project has not advanced past the conceptual stage due to the challenges of the COVID-19 pandemic. The hope is that funding will be made available soon in order to complete design and construction before commencement of the next school year.