Remediation and Renewable Energy Forge a Path for Redevelopment

Tighe & Bond, Inc. has provided engineering and environmental consulting services on the 143-acre site of Mt. Tom’s former coal-fired power plant in Holyoke, Massachusetts since 1969. The plant ceased operations in 2014 and ENGIE North America (ENGIE) began decommissioning and closing the power plant site. ENGIE contracted with Tighe & Bond at the onset of the project to complete two major objectives:

Tighe & Bond’s engineers and environmental scientists worked in tandem to oversee their respective portions of the project to achieve the transformation of this property, providing innovative remedial solutions and sitewide facility decommissioning support services. This dynamic large-scale demolition project required extensive coordination with regulators, other consultants, and general contractors to achieve the project objectives.

The coal-fired power plant site in Holyoke, Massachusetts in the early phase of demolition. 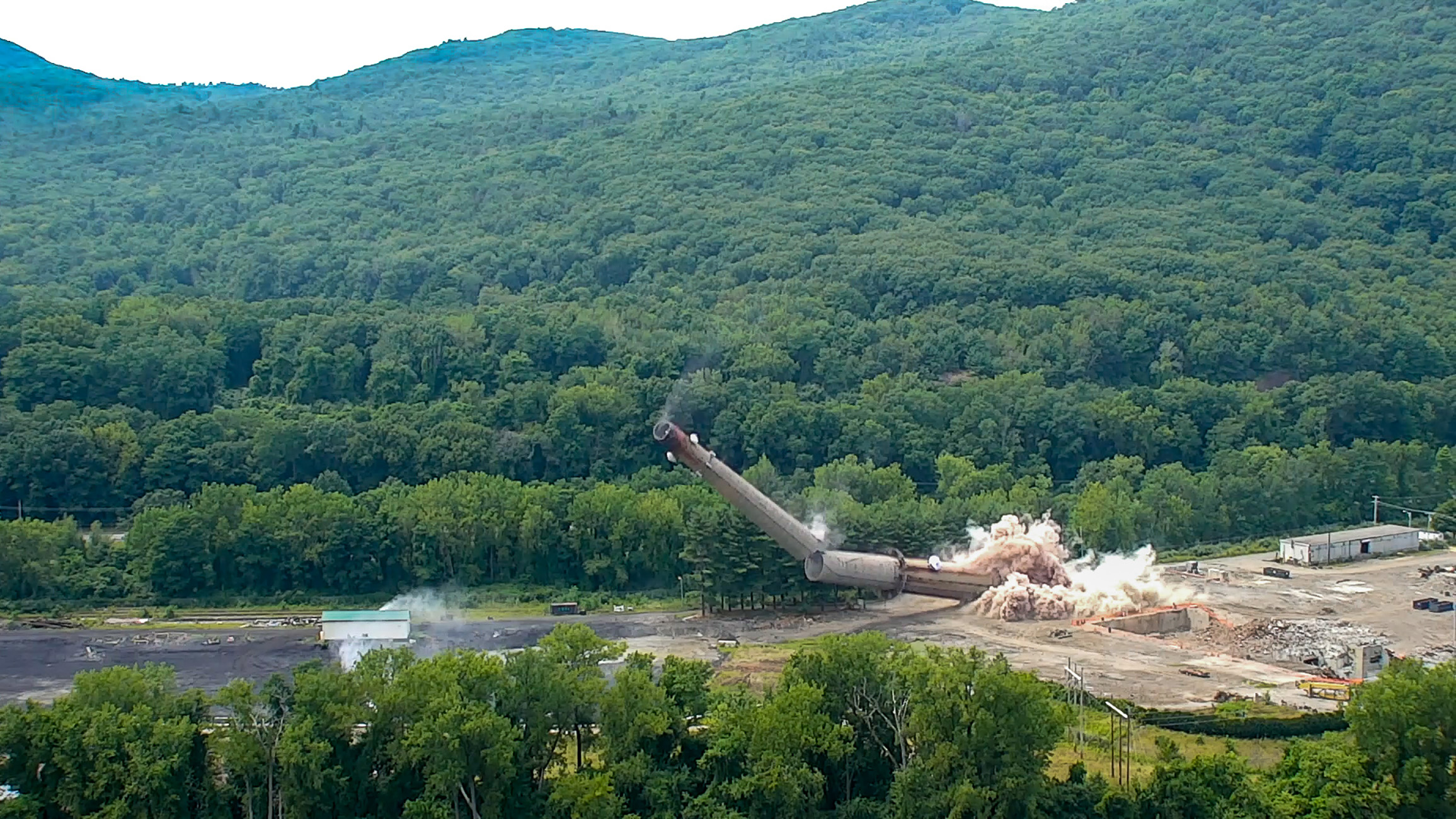 The nearly 400-foot smokestack was imploded in August 2019, marking it the last
major piece of the coal-fired power plant infrastructure to be demolished.

The closure of the former coal-fired generation plant included two main concepts; demolition involving the removal of the above-grade facilities with decommissioning of the subsurface infrastructure, and remediation of the facility-related disposal areas, which involved development of a site-specific human health and environmental risk-based approach. Tighe & Bond's environmental team designed and implemented a comprehensive site investigation program, as well as the corresponding remedial action plan for the power plant facility and the associated management of the coal ash landfills on the property.  A detailed delineation and evaluation of the various site habitats with a focus on wetland resources and other sensitive environmental receptors at, and adjacent to the site, was performed as part of the overall approach.

Tighe & Bond collaborated with MassDEP to develop this approach, which would achieve compliance with a variety of regulatory requirements as part of the site closure program, but namely with the Massachusetts Contingency Plan (MCP). Specifically, the MCP served as the mechanism to achieve regulatory closure, rather than implementing a solid waste closure approach (clear cut and cap), which would have resulted in significant land disturbance and destruction of existing coal ash-forested areas and wildlife habitats. Closure of the environmental issues (most notably the coal ash areas) was previously contemplated but could not reach regulatory endorsement due to the wide-spread habitat impact. In contrast, the project team’s MCP closure strategy was able to be implemented due to the innovative risk-based closure options that were supported by MassDEP, the Army Corps of Engineers, the Massachusetts Natural Heritage and Endangered Species program, and the City of Holyoke Conservation Commission.

The successful coal ash closure approach was completed in the summer of 2020 and enabled the preservation of nearby waterways, including the Connecticut River and Kennedy Brook, and the protection of over 50 acres of vegetated forest and its associated rare and endangered species.

With the wave of coal-fired power plant closures occurring across the United States, the unique overall closure approach could serve as a basis for projects of similar nature. This is especially true when private industry, regulators, and consultants collaborate on developing practical solutions, which ultimately benefit area communities, improve local economics through redevelopment and land use improvements, and is protective of the overall environment.

A Tighe & Bond environmental scientist uses an auger to take soil samples along
the preserved bank of the Connecticut River. 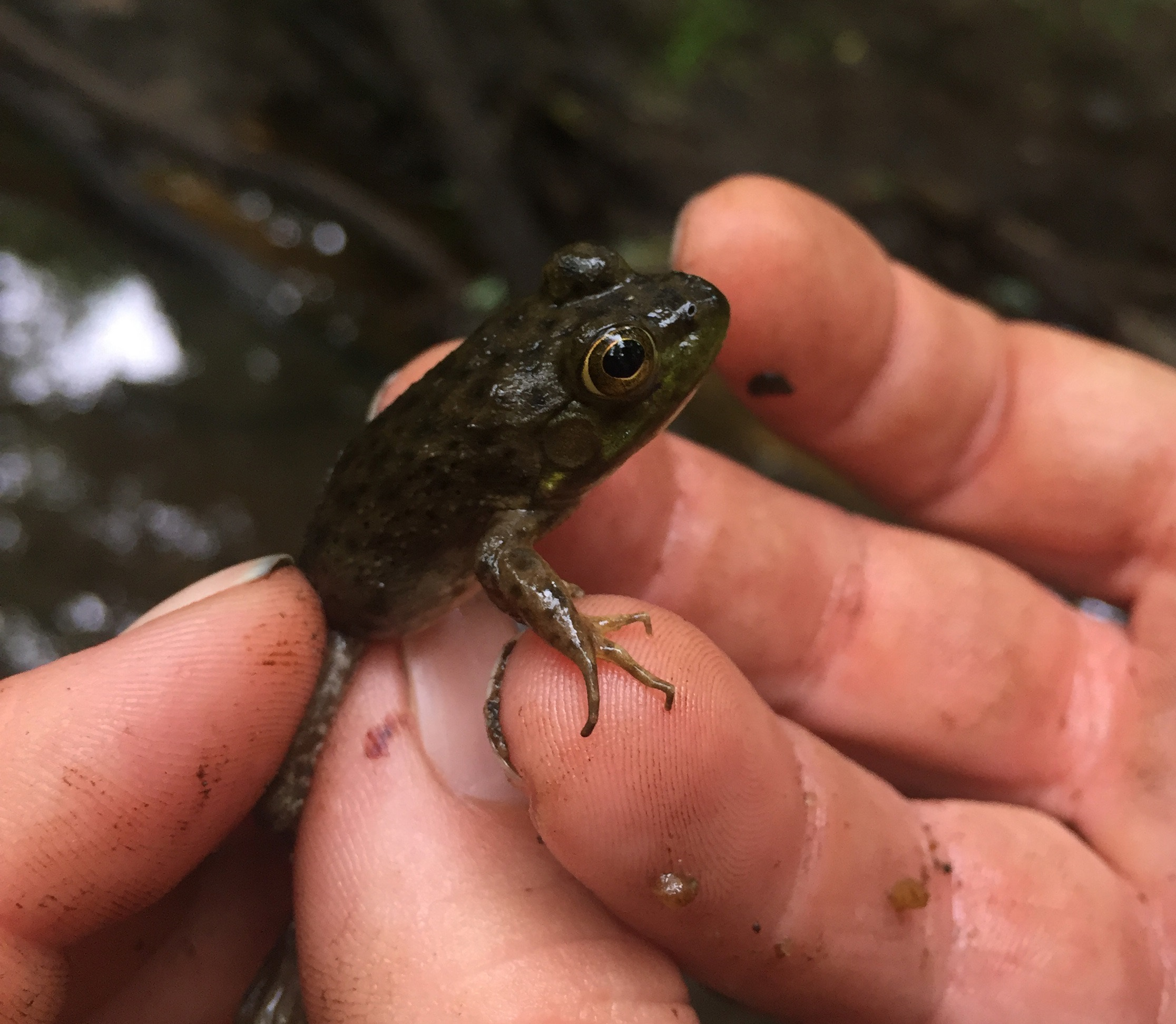 The successful closure approach enabled the protection of over 50 acres of vegetated forest
and its associated rare and endangered species habitats.

The design for the solar facility and Tighe & Bond’s design for the energy storage facility were careful to elevate all components of the energy and storage facilities above the elevation of the “100-Year Storm” and develop a plan for detailed site grading and to mitigate fill in the floodplain area due to the proximity to the Connecticut River. During this solar and energy project, additional steps were taken to avoid disrupting the existing environment by installing native plantings and species, minimizing the amount of site clearing, and introduced a project-specific mowing regimen to accommodate restrictions for nesting birds and mammals.

Holyoke Gas & Electric (HG&E) entered into a Power Purchase Agreement with Mt. Tom Solar, LLC which allows HG&E access to the energy collected by the solar and energy storage facilities. Electricity from the Mt. Tom solar facility was designed to be collected and stored by this isolated energy storage system that connects to HG&E’s electricity grid. It’s called upon during local and regional peak times for electricity usage since around 8% of the utility’s energy costs are from the top 1% of the hours of energy use. The battery storage system will help HG&E stabilize electric rates long-term because they are avoiding exposure to extreme peak energy prices by using the battery’s energy rather than the grid’s energy during those high-cost hours. By using the energy storage project over a 20-year term, they will also reduce the burden on their electrical distribution system, therefore increasing the overall asset life. The installation of the energy storage component of the project was completed in 2018 and is currently being used by HG&E.

An aerial of the completed solar facility that can generate enough hours
of solar energy production to power approximately 1,800 homes in the area
for an entire year.

The solar and energy storage facilities marked several “firsts” for the Commonwealth at the time of completion. The solar facility became the largest community solar project in the state. The facility generates approximately 7,300-megawatt hours of solar energy production, which is enough to power 1,800 homes in the area for an entire year. The energy storage component of the project gained recognition as the largest utility-scale energy storage installation in Massachusetts.

The transformation of the coal-fired plant to a fully remediated and safe site, enabled ENGIE to move forward with its plan to use the property for future development. The completion of this project has continued to positively impact the City of Holyoke. In 2019, the City was recognized by Smart Electric Power Alliance (SEPA) for the third most annual energy storage watt-hours per customer in the entire nation. In 2021, SEPA honored HG&E as one of the top 10 utilities in the nation to demonstrate the greatest progress during their transition to clean energy. As Massachusetts’ energy market continues to evolve, Tighe & Bond’s project team hopes the transformation of Mt. Tom can serve as a model of success that can influence future solar and energy storage projects and coal-fired power plant closures across the region.