The effects of climate change vary wildly – from extreme heat and wildfires to increased and more intense rainfall and flooding. On a global scale, communities are recognizing the need to protect and upgrade infrastructure to be more resilient and adapt to the changing world, and much of this work falls on engineers.

Flooding in Cambridge, MA
The Port neighborhood in the City of Cambridge, Massachusetts is one example where there is greater risk of flooding from stormwater and, as a result, sanitary sewer backups in residential homes and businesses from more frequent and intense rain events. Historically, stormwater from The Port neighborhood has flowed into the Massachusetts Water Resource Authority (MWRA)’s combined sewer system, but with limited capacity to manage flows from today’s increasingly large storm events, the neighborhood has experienced significant and worsening flooding and sanitary sewer backups.

Climate change will exacerbate the frequency and severity of storms,
resulting in flooding from stormwater and sewer overflows.
The Port neighborhood in Cambridge, MA, is just one community
especially at risk to the effects of climate change.

Adding to these issues is the fact that this neighborhood is comprised of a disproportionately high number of people with lower incomes and who primarily speak a language other than English. Based on the City’s recent assessments on climate change vulnerability, this factor tends to mean they are even more at risk from the effects of climate change.

Underground Stormwater Tank Project
The City of Cambridge constructed drainage infrastructure to help relieve future flooding issues in The Port Neighborhood and contracted Kleinfelder – a leading engineering, design, construction management, construction materials inspection and testing, and environmental professional services firm – to serve as the lead consultant for the project. Working closely with the City, Kleinfelder designed a 390,000-gallon, 119-foot-by-36-foot cast-in-place underground Parking Lot No. 6 (PL6) Stormwater Tank, named for its location in the City-owned parking lot, to capture stormwater in The Port neighborhood and redirect it from MWRA’s overburdened combined sewer system to the Charles River via an existing storm drain in Massachusetts Avenue – both a complex utility and urban traffic corridor. 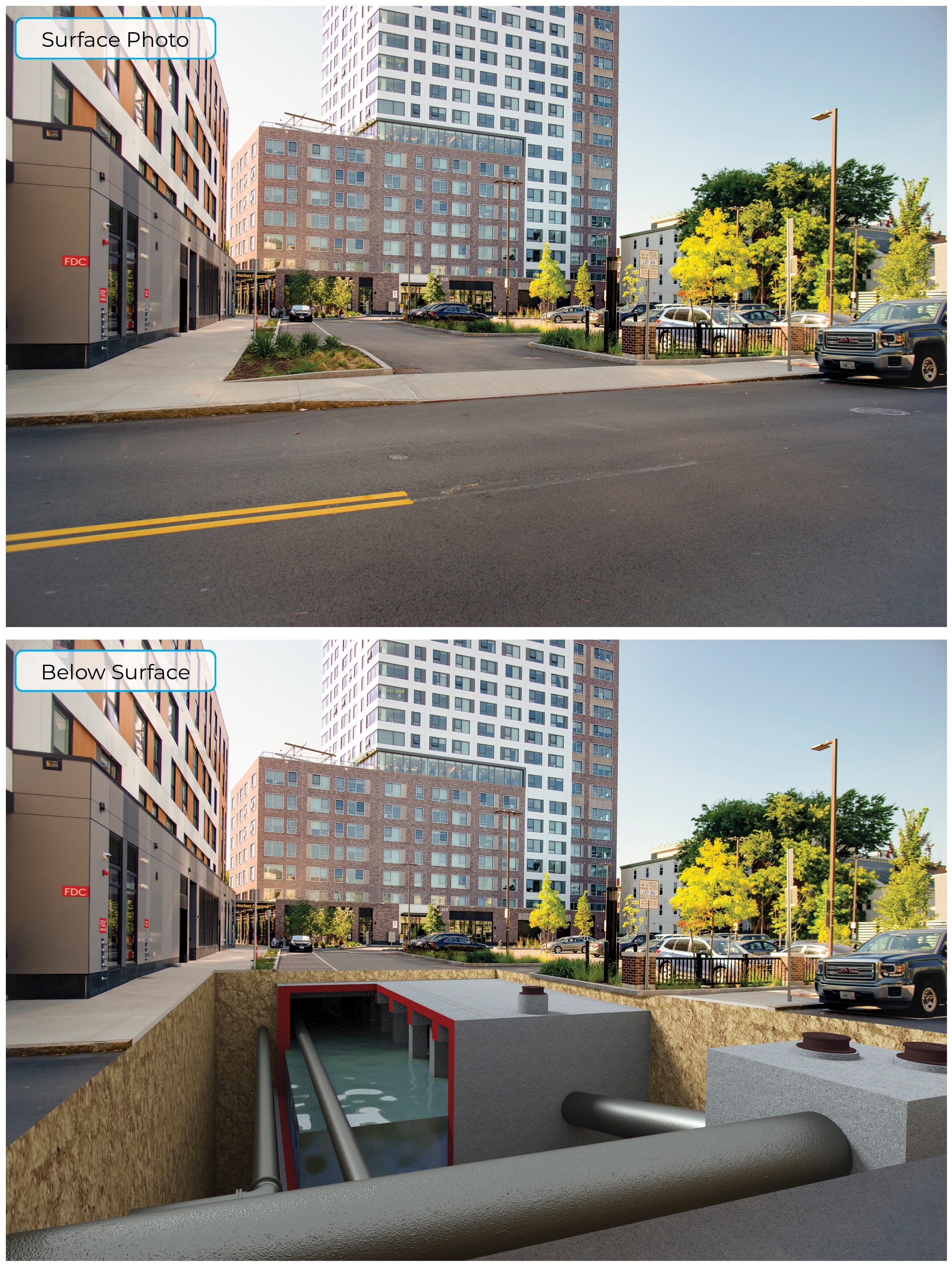 A rendering, bottom, illustrates the stormwater tank and other subsurface elements
beneath the restored Parking Lot No. 6, top, in the City of Cambridge, Massachusetts.

Facing Challenges
Connecting the PL6 stormwater tank to the Massachusetts Avenue storm drain required microtunneling 200 feet of 72-inch steel casing pipe, carrying four force mains, within feet of the active Massachusetts Bay Transportation Authority (MBTA) Red Line subway. Constructed in 1910, the Red Line tunnel is 23 feet deep with limited as-built information. Faced with less than 2 feet of cover between the road surface and the roof of the train tunnel and major structural concerns with a tunnel crossing, the Kleinfelder team conducted an extensive alternatives evaluation and devised multiple design iterations. Advancing the tunnel within difficult ground conditions due to weight-of-hammer Boston Blue Clay was an added challenge, and the subway tunnel was at high risk of damage from differential movement. Furthermore, construction of a new Market Central development project – including two towers, 6 and 19 stories high – surrounding PL6 was simultaneously taking place. 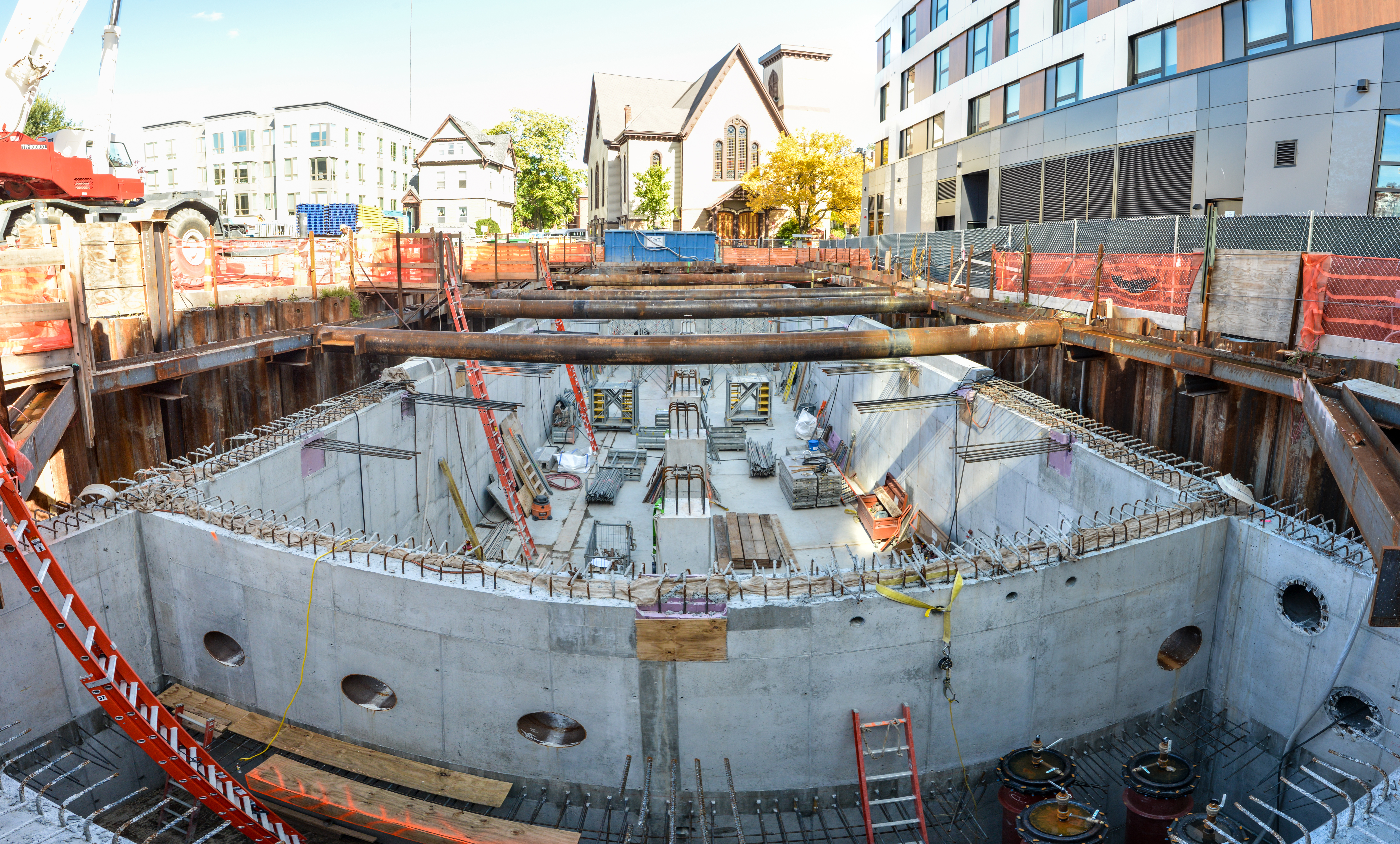 The stormwater tank under construction in Fall 2019. The simultaneous construction
of the Market Central towers (building shown on the right), less than 8 feet from
the tank, required extensive coordination and geotechnical monitoring.

Collaboration Brings Success
Kleinfelder, the general contractor (Skanska Civil USA), and the tunneling contractor (SECA Underground Corporation) worked in collaboration to overcome each challenge with a collective engineering solution and modifications to the tunneling approach, circumnavigating beneath the MBTA Red Line crossing without service disruption. Additionally, regarding the various languages spoken in the community, Kleinfelder and the City engaged with The Port community throughout design and construction to ensure stakeholder materials were clear, translated, and shared in prominent locations such as churches and community centers.

Award-Winning Work & Project Success
The project’s success was demonstrated after the tank went online in May 2021 and proceeded to divert more than 3,480,000 gallons of stormwater to the Charles River in the summer months alone, significantly reducing flooding in The Port neighborhood during the Boston area’s third-wettest summer on record. The tank is Phase 1 of the City’s multiphase resiliency plan, and as such, the stormwater tank’s design considers integration with future infrastructure improvements that will further increase the neighborhood’s resiliency.