An engineering success story, the Crescent Marsh Restoration Project gave a struggling, fragile ecosystem a chance to thrive once again. The uniqueness of the marsh and its location marked this project as a particularly challenging and sensitive endeavor.

An Ailing Marsh
No ordinary marshland, Crescent Marsh in Saugus, Massachusetts, belongs to the greater Rumney Marsh estuary system, which the U.S. Fish and Wildlife Service has hailed as "one of the most biologically significant estuaries in Massachusetts north of Boston."  Its significance as a natural resource and the pressures of development led the Commonwealth of Massachusetts to designate the 2,274-acre Rumney Marsh as an Area of Critical Environmental Concern (ACEC) and an Outstanding Resource Water (ORW) .

Once part of Bear Creek, 23-acre Crescent Marsh was separated from this estuary with the construction of an access road in the early 1970s. A 48-inch corrugated metal culvert owned by the Massachusetts Department of Transportation (MassDOT) maintained the inflow of tidal water vital to the marsh’s survival while serving as an outlet for stormwater. Over time, the undersized culvert severely limited the natural exchange of freshwater and saltwater. Freshwater inflow from stormwater runoff dominated the marsh, causing the salinity to decrease and the natural salt marsh species and habitat to suffer. Crescent Marsh’s health further declined as the culvert became partially blocked due to corrosion. To address the marsh’s deterioration, the Environmental Protection Agency (EPA) and the Massachusetts Department of Environmental Protection (MassDEP) recommended replacing the culvert. 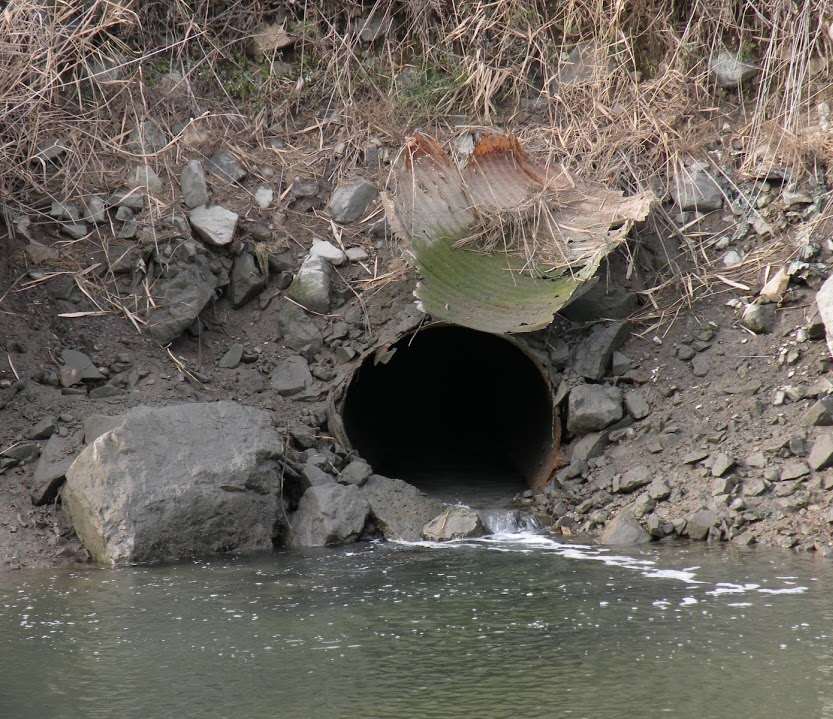 A Complex Project
From its outset to its completion, the Crescent Marsh Restoration Project presented the project team with complexities. The compromised culvert’s location under an approximately 20-foot-deep capped landfill (including a liner system) that lay beneath the access road necessitated a carefully considered plan and an intensive permitting process to safely replace the 260-foot-long pipe. Serving as MassDOT’s engineering consultant, VHB’s team led this intricate and demanding project. MassDOT selected general contractor R. Zoppo Corp. to construct the project. The owner of the private access road over the culvert, waste-to-energy facility WIN Waste Innovations (formerly Wheelabrator Technologies), was a proponent of the project from the beginning, and instrumental to its success.

Getting to Work
VHB’s wetland scientists conducted an ecological assessment using photo interpretation, vegetative analysis, wildlife habitat observations, and wetland delineation and determined that the marsh was highly impaired. Its decreased salinity had caused a proliferation of invasive species and a dramatic decrease of salt marsh vegetation.

Developing a rainfall-runoff hydrologic model using HEC-HMS software and a one-dimensional unsteady flow hydraulic model using HEC-RAS software, VHB’s water resources engineers evaluated the impact of the existing 48-inch culvert on tidal flow into Crescent Marsh and assessed replacement culvert alternatives. The analysis determined that a reinforced 6-by-6-foot concrete box culvert would restore the tidal flushing critical to the marsh’s health, allow the conveyance of freshwater runoff under the access roadway, and adequately accommodate flood events. According to the engineers’ calculations, the proposed structure would increase the tidal prism from 0.40 to 43.39 acre-feet during the spring tide, and from 0.23 to 11.19 acre-feet during the neap tide. The proposed replacement culvert would also maintain 4.9 feet of freeboard during the 10-year hydraulic design storm.

VHB’s engineers went on to develop design plans and specifications for the new culvert and helped MassDOT navigate the extensive permitting process with MassDEP. The project plans and permits detailed a careful process for restoring the landfill following the culvert replacement, which included repairing its high-density polyethylene (HDPE) liner and cap system. Construction began in fall 2019 and was completed in spring 2021, with VHB providing construction phase services and observations throughout its duration. 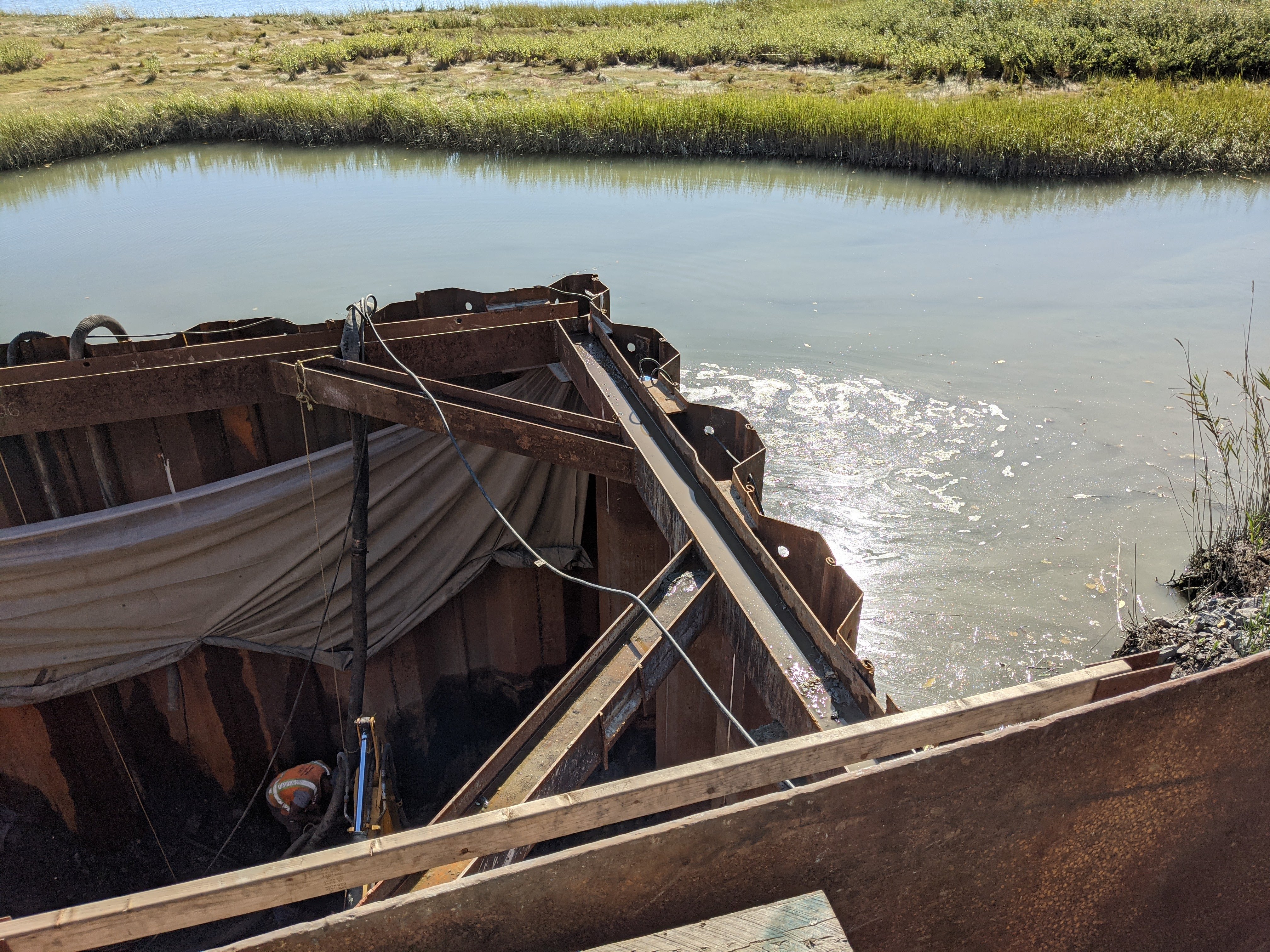 Innovation and Sustainability
Due to its unusual context, the Crescent Marsh restoration required the project team to apply out-of-the-box thinking and techniques. Finding a viable means for safely containing a large volume of groundwater in a sensitive wetland area posed a challenge to the team. Rather than constructing a complex and disruptive groundwater conveyance system from the excavation site to the waste-to-energy facility’s leachate system, VHB’s engineers and R. Zoppo Corp. developed a simple and successful solution. By driving sheet metal piles into the ground around the excavation site and welding and sealing them, they made a retaining wall that effectively kept groundwater out of the site.

Maintaining uninterrupted access through the worksite for WIN Waste Innovations presented the project team with another challenge. Based on VHB’s outline, the contractor completed the construction in two phases to minimize the impact on the facility’s daily business. A portion of the culvert was excavated and replaced in the first phase, and then the contractor built a temporary access road to allow vehicles to bypass the replacement of the remaining portion of the culvert in the second phase. Praising the team’s work, WIN Waste Innovations Senior Environmental Manager Matt Hughes said, “It really was a great effort … There was open communication between all parties and minimal disturbance to our operations.”

A focus on sustainability informed the project team’s implementation of a greener cleanup strategy during the site excavation. The contractor’s subconsultant Strategic Environmental Services, Inc. treated the excavated landfill soil so it could be reused within the active portion of the waste-to-energy facility’s nearby monofill, saving time, energy consumption, and additional cost. VHB’s scientists also obtained MassDEP’s approval to reuse the existing clean landfill cap material rather than importing additional soil. Furthermore, having the ability to contain the groundwater at the site saved the contractor from treating, collecting, and hauling the water off-site.

A Successful Outcome
The larger 6-foot concrete box culvert installed by the project team has dramatically increased the inflow of tidal water to Crescent Marsh and provides an effective outlet for stormwater. As a result, Crescent Marsh, which represents 23 of the 313 total acres of Rumney Marsh Restoration Areas identified by the EPA, is expected to recover as a salt marsh habitat.  VHB’s wetland scientists forecast that the tidal flushing and stormwater drainage facilitated by the replacement culvert will eventually restore a saltwater habitat suitable for a variety of fish, birds, and animals.

But the project’s significance extends beyond that of an ecological success story alone. Recognition of the delicate interplay among expanding communities, commercial interests, and a biologically significant wetland area led to the Commonwealth’s designation of Rumney Marsh as an ACEC. Mindful of that interplay, this carefully orchestrated project not only made the restoration of a fragile ecosystem possible, but it enabled the WIN Waste Innovations facility to operate unhindered all the while. The successful outcome of the Crescent Marsh Restoration Project furnishes compelling proof that the engineering profession has the capability to satisfactorily balance both human and ecological needs, even in challenging contexts.