Replacement of the MBTA Franklin Line Over East Street

The Massachusetts Bay Transit Authority’s (MBTA) East Street Bridge is locally known in Westwood as the “can opener” bridge. It is renowned on YouTube for many accidents caused by the substandard clearances and roadway alignment. The existing bridge was not classified as structurally deficient; however, substandard vertical and horizontal clearance and an awkward roadway approach resulted in many traffic accidents and vehicle collisions with the bridge structure. There were 81 accidents reported between 2009 and 2015 alone. These incidents have rendered the bridge functionally obsolete. 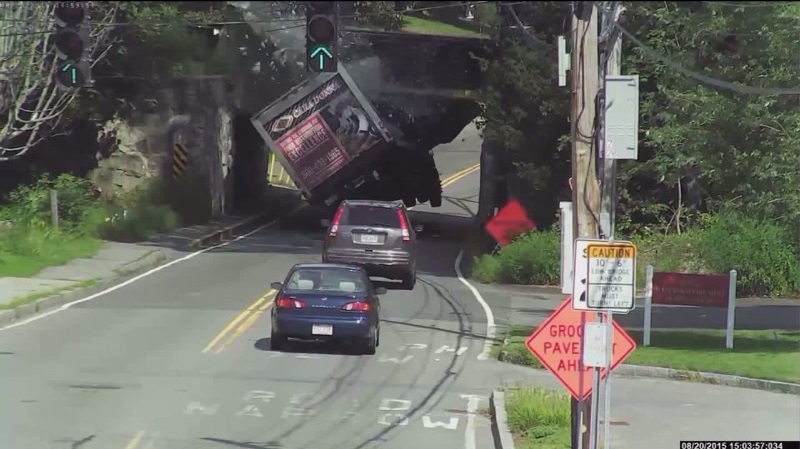 As the prime consultant for the East Street Bridge project, VHB partnered with the MBTA to provide project management, structural engineering, highway and rail design, right-of-way coordination, and stakeholder and public engagement services. The primary goal of the project was to improve the horizontal and vertical clearance of the roadway below, and to improve the safety for both vehicles and pedestrians.

Overcoming Constraints and Concerns
The Franklin Line is a critical part of the MBTA’s commuter rail network and is heavily used by both commuter and freight rail. Likewise, East Street is a heavily traveled roadway, and one of only four grade separated crossings within the Town of Westwood. It provides a direct connection between Westwood and Interstate Route 95. A major constraint impacting superstructure options was the necessity to increase the roadway clearance both vertically and horizontally below the bridge. To widen East Street and increase the vertical clearance of the bridge, VHB lowered the roadway and relocated underground utilities. These utilities included gas, water, communications, and storm drainage. To minimize disruption to rail service and East Street traffic, accelerated bridge construction techniques were used to the maximum extent practicable. Working under a compressed timeline, the project team closed the bridge and roadway over two weekends to install prefabricated abutment elements and then erect the preassembled superstructure. These decisions allowed for normal weekday traffic patterns and minimal disruption to the community.

Once accelerated bridge construction (ABC) was chosen, the types of feasible superstructures for such a project were limited. The structure type of through plate girders with a ballasted deck was ultimately chosen because it had the shallowest structure depth. The design team further reduced the structure depth by creating the concept of two separate bridge structures. This concept not only facilitated the accelerated construction scheme, but it also allowed for shallower girder sections due to not having a center girder supporting two tracks. With the two-structure concept came another consideration - the structure layout would require one track (Track 1) to shift approximately 3.5 feet to the west (away from Track 2). To minimize that shift, it was required to take advantage of the minimum MBTA clearance envelope to lay out the girders. This change triggered the need to include access walkways on both structures.

Like the superstructure selection, the substructure type selection was also narrowed down by the decision to use accelerated bridge construction. To install the new substructure with the least amount of disruption to the active tracks, constructing deep foundations with precast abutment pieces was preferred to enable the construction sequence.

Accelerated Bridge Design
After the project reached the 30 percent design level, the MBTA was given the opportunity to bump the project construction start date up by a year. This required the MBTA and VHB to develop an accelerated design schedule by streamlining the design process to provide an interim set of plans with 60 percent specifications, while proceeding directly to the 90 percent plans, specifications, and estimate. VHB and the MBTA committed to the updated timeline without sacrificing the quality of the product.

To adhere to the project constraints, bridge design aimed to include accelerated bridge construction techniques to the maximum extent feasible. The proposed design incorporated drilled shaft foundations with precast substructure elements. The best way to construct the new abutments was to place them behind the existing abutments, so the track could remain open while installing most of the proposed elements. The proposed drilled shafts were set far enough back to make certain they would not impact the existing abutments during installation. The location of the existing rails was also taken into consideration when laying out the shafts to allow for as much drilling during active rail times as possible. Soldier piles with cast-in-place concrete lagging walls completed the abutment and wing wall support, which were laid out to avoid the existing rails and abutments to the maximum amount that was practical. Concrete deadmen tied back the North (fixed) abutment to limit longitudinal force impacts on the drilled shafts and soldier pile and lagging walls. Using these walls created the opportunity for the concrete facing to be cast after the existing abutments were demolished and the new bridges installed. This allowed for more space and greater flexibility for relocating the utilities and completing the remaining roadway work, while always maintaining two lanes of traffic.

When it came time to develop the superstructure design, several factors went into the design decision. First and foremost was to minimize the structure depth to facilitate the improved clearances that were required. The proposed structure required a ballasted deck instead of the existing open timber deck. A ballasted deck would require a slightly deeper structure, which limited the options. A steel through plate girder structure was selected to take advantage of the girder-floorbeam system. To maintain traffic on and under the bridges, the superstructure would be pre-assembled off site prior to installation. The constructability of installing a large two track structure was not ideal; thus, the concept of two identical smaller structures was introduced, which allowed half the bridge (one track) to be constructed during each weekend shutdown.

Accelerated Bridge Construction
To minimize disruption to rail service and East Street traffic, limited track and roadway shutdown windows were used to erect precast abutments and to preassemble and erect the through plate girder superstructures. Barletta Heavy Division (BHD) of Canton, MA, was the selected contractor through the bid process, and had extensive experience with several similar past ABC projects. Bridge replacement, including associated utility relocations and track realignment, were accomplished during a series of short-duration track and roadway closures, and weekend shutdowns. The project team worked closely with the Town and local police to give ample notice to residents and local emergency services ahead of roadway closures. The detour routes and closure times were coordinated between all parties in order to minimize the impact to the community as much as possible. 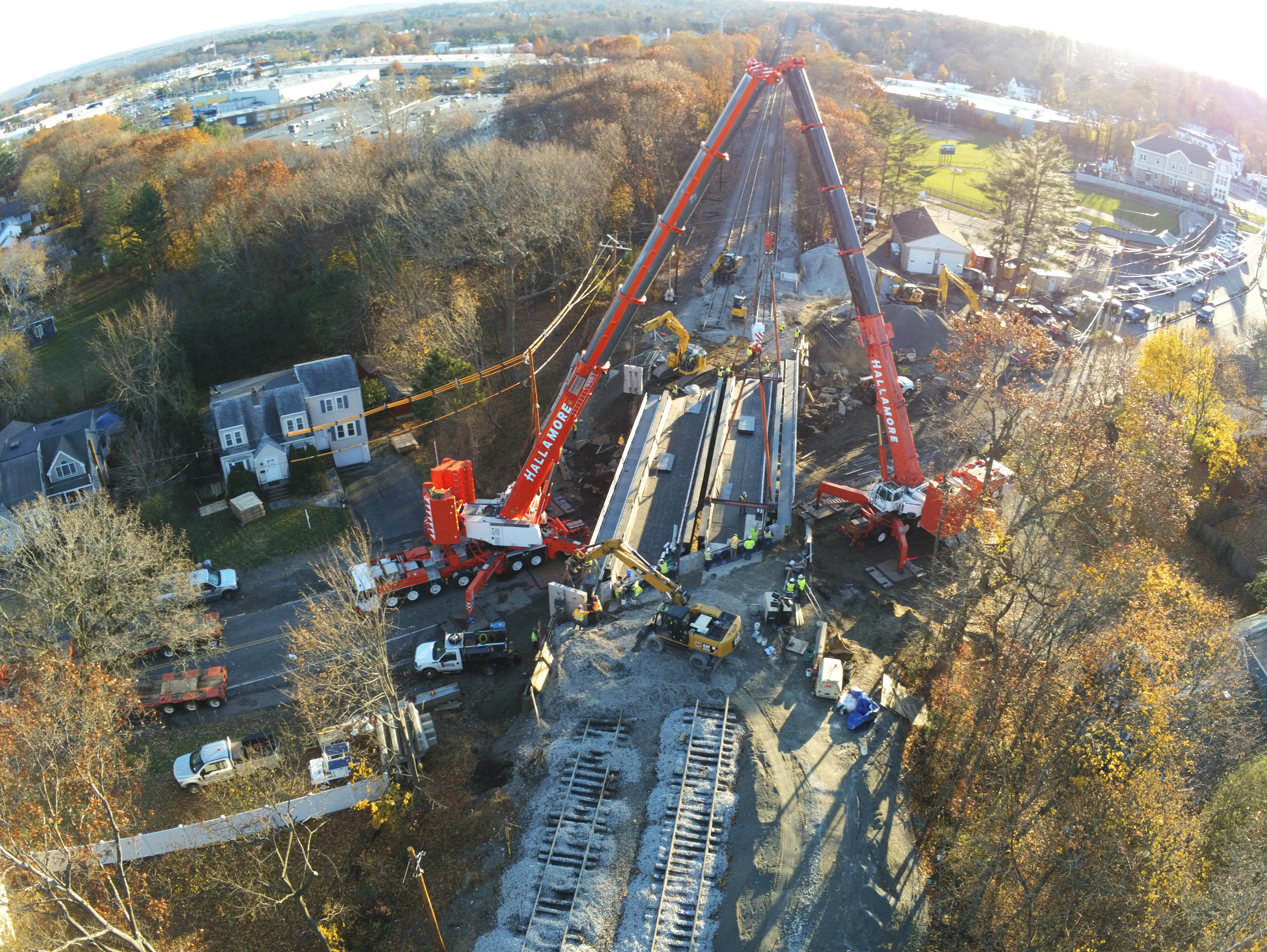 The drilled shafts and soldier piles were simultaneously installed during a series of single and double track weekend shutdowns, while East Street remained open. A number of the soldier piles were installed while both tracks were active due to their distance from the existing tracks, which allowed some of the work to be completed during the week. Four of the six shafts and the rest of the soldier piles were constructed and installed while at least one rail was active during single track weekends. The two center shafts were constructed during a single weekend with a full track closure. With timely scheduling of the drilled shaft installation, the project was able to take advantage of a closure required for the installation of Positive Train Control occurring at the same time. This reduced project costs relative to bussing weekend passengers.

A Successful Outcome
The need for uninterrupted commuter rail traffic required accelerated bridge construction techniques to be used throughout the project. As a result, work was concentrated during off peak and weekend time to facilitate the continued access for traffic below and on the bridge. The timing for construction funding required the design team to accelerate the design process without sacrificing on the quality of the project. With proper planning and extensive teamwork, the result was a successful high-profile bridge project completed on schedule and under budget. 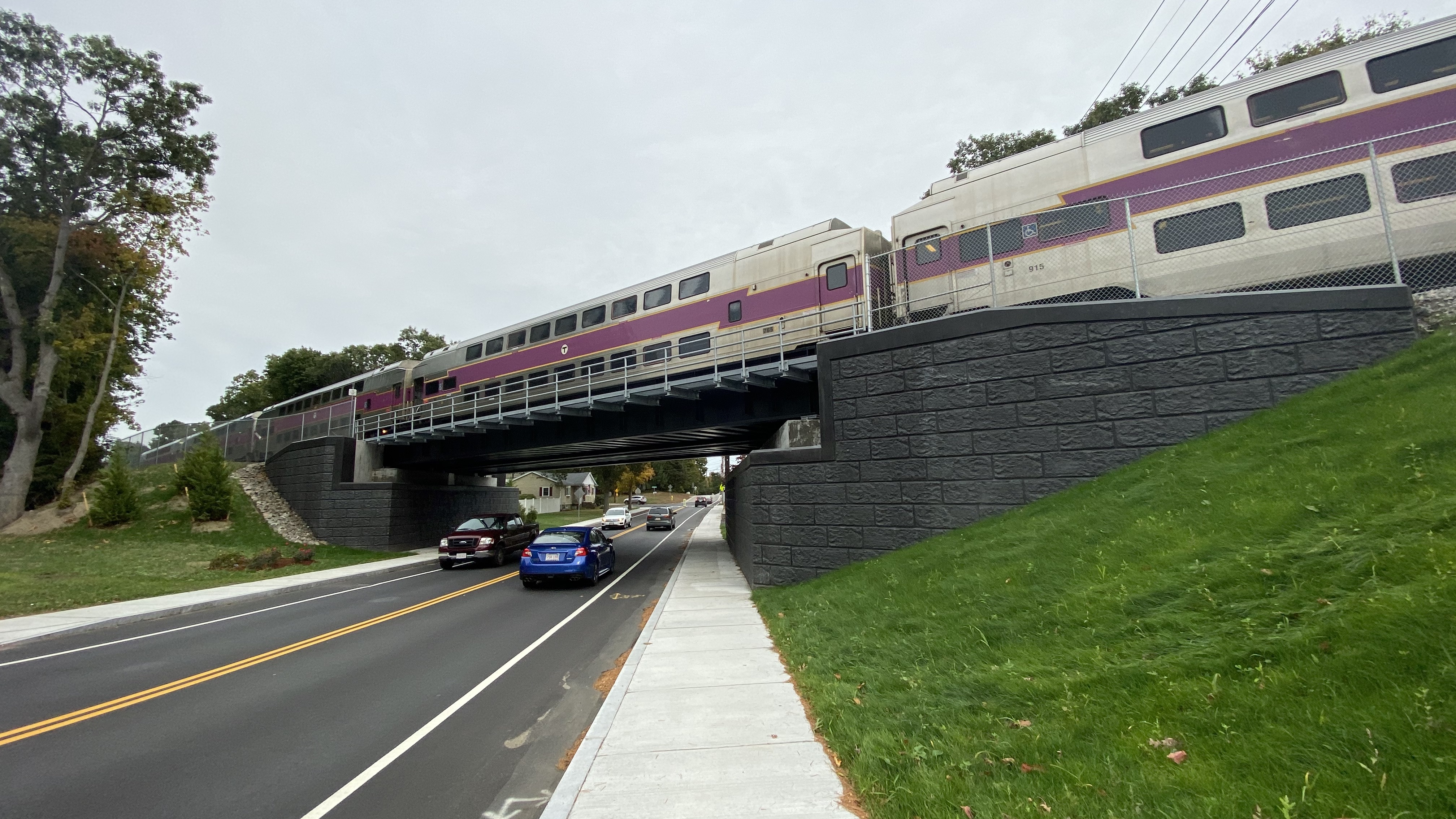