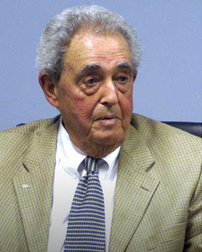 Don Goldberg, co-founder of GZA GeoEnvironmental, Inc. (GZA), passed away on February 23, 2021 at the age of 92.  He was one of the true pioneers in the field of geotechnical engineering starting his own consulting firm in 1964 when there were few other geotechnical engineering firms in the country.  Starting out locally in the Boston community, his impact ultimately extended far beyond Boston and far beyond geotechnical engineering.  Over the course of his career, he touched thousands of lives and forged a path for thousands in developing their careers within geotechnical, geoenvironmental and construction practice throughout New England, and in the Mid-Atlantic and the Great Lakes regions.  Throughout his 30 years of practice, he built an enduring legacy of excellence, trust, and doing the right thing for his employees, clients and community at GZA, which continues to thrive today with 700 employees operating out of 30 offices around the country.

Don was born in Winthrop in 1928 and attended Tufts University (then College) in the 1940’s with the original intent of becoming a doctor.  His professional focus shifted after graduation and eventually pointed him in the direction of MIT. His initial interest had been aeronautical engineering, but a few of his classmates suggested that civil engineering was where it was really at.  One of those was Bill Zoino, a commuting buddy from Brockton.  Don received a Bachelor of Science in Civil Engineering in 1954 and a Master of Science in Civil/Geotechnical Engineering in 1957 from MIT.

Don spent his early professional years at Mueser Rutledge in New York and Haley & Aldrich (H&A) in Cambridge.  Harl Aldrich was an early mentor.  At the time, H&A was the only geotechnical firm in Boston and geotechnical consulting was in its infancy as a profession.  In the fall of 1964, Don left H&A to pursue his desire to start his own firm.  He reached out to Bill Zoino, who was working for Ebasco at the time in New York City to join him, and they co-founded Goldberg-Zoino & Associates.  It was a big risk personally and professionally, but he always said he figured that if it didn’t work out, he could always get another engineering job somewhere.  It did work out. 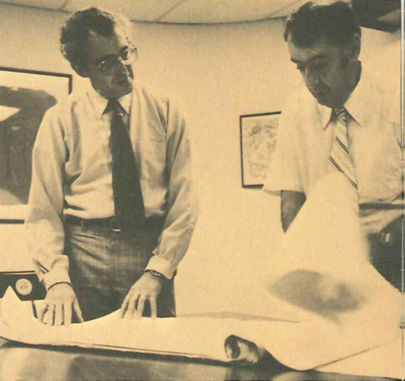 Behind Don and his partner Bill, GZA quickly built a reputation for providing clients with innovative and practical solutions. Don’s willingness to pioneer the use of cutting-edge geotechnical engineering solutions and new technologies solidified GZA’s position as one of the top firms in the profession.  The MBTA Red Line subway extension in Cambridge, Massachusetts, a cut-and-cover deep excavation in sensitive clay, was one of those defining projects.  Don proposed the first-ever use of slurry walls for both temporary excavation support and permanent support of basement walls.  He applied new technologies in below-ground construction, such as first use of tiebacks to support deep excavations in soft soils, and the installation of “record” quantities of lightweight concrete fill to relieve load and stabilize sea walls/basement walls for Commonwealth Pier (now Seaport World Trade Center) in Boston.  Many of the technologies first utilized on Don’s projects are now standard practice in the industry.

For those who worked with him at GZA, Don was perhaps the brightest, most accomplished, most tenacious, and most complete individual they had ever known.  He was held in the highest regard by all those around him.  He always gave his best and brought out the very best in others.

From an engineering standpoint, no one was better.  He had an exceptional understanding of engineering principles and their practical application.  Typically, in any meeting of a group of engineers, he was the best in the room.  He was brilliant.   He was quick.  He was hard to keep up with (and always with just a pencil, paper and slide rule). He set the standard for technical excellence and professional practice at GZA.  Anyone who worked with him knew they would be pushed, and no one ever wanted to let him down.  But they also knew that if they faltered, he always had their back.

From a business standpoint, he was always thinking of the next thing, looking for the next wave.  He felt the firm had to keep trying new things so that it could thrive.  With Bill Zoino, and later with John Ayres, he constantly moved the company in new directions and typically was not afraid to be the first to try something new and in doing so, they established a geotechnical instrumentation division and were the first local geotechnical firm to provide environmental engineering/consulting services focused on hazardous waste studies and remediation (1970s); they became one of the first consulting firms in the Northeast to offer in-house test boring and environmental laboratory services (1980s); and the first consulting firm in Boston to perform dynamic pile testing when that was a brand new field in the 1980s.

But underlying that drive was a strong commitment to family, community service, and professional service.  Before “work-life balance” was a term, Don would always try to be home by dinner time to spend time reading with the kids, helping with homework, doing household chores, and just being there for his family.  He encouraged his employees to put family first.  He initiated GZA’s first charitable giving program and encouraged participation by all employees. In his time at GZA, Don served as President of the Massachusetts Section of the American Society of Civil Engineers prior to its merger with the BSCES.  He served on the Board of Directors of both organizations.  He served as chair of the Structural and Geotechnical technical groups of BSCES. He served as President of the American Council of Engineering Companies of New England and was on its Board of Directors.  Don was also a founding member of The Engineering Center in Boston and served a term as its President.

But Don’s most enduring impact, and the key to the long-term success of the company, is the culture that he and Bill established.  So much of the culture was and still is – even after all these years - a reflection of Don’s character, personality and extremely strong moral compass.  He believed that doing the right thing was more important than maximizing profits.  He cared totally and thoroughly about GZA’s employees first and foremost and in providing opportunities for GZA staff to grow and advance their careers without having to go elsewhere.   He mentored them, worried about them, helped them and taught them.  He believed that what we accomplished at GZA was always a team effort.  He hated to hear someone say, “I did this” or “I did that” or “my client.”  For him, it was always “we did this” and “our client.” He demanded that his employees show respect for others and operate always with integrity.  He believed that clients expected us to do more than just deliver the expected result but to deliver an unexpected and better result.  Don was especially good at that.

Those core values of operating with integrity, thriving on challenges, providing opportunities for all, caring for our communities, and supporting employee ownership, are still GZA’s Core Values today - 57 years later.

In recent years, Don along with Bill (and their wives and families sometimes) visited with the company on a number of occasions so new generations of GZA employees could get a chance to know them.  Over time, it began an annual tradition which we now call “Founders Day” – a day when Don, Bill, their families, and other key contributors to GZA visit the company and discuss its roots.  It is always like a visit from engineering royalty.  Everything in the company came to a halt.  At moments like these, they were able to directly impart the meaning of GZA, and we most felt the connection with them.

Don leaves behind his wife Maxine, his daughters Anne and Lisa, son Jonathan, stepchildren Robert and Laura, thirteen grandchildren, two great grandchildren, and the loving memory of his first wife Joan who was an important part of GZA in its first three decades before passing away of cancer in 1992.    He also leaves behind a legacy of the 700 people that currently work at GZA and the hundreds of others who have passed through its doors – and have been made better professionals by the example he provided and the core values he instilled in all of us.

On behalf of grateful professionals who have had the pleasure of being mentored by you and working for the firm you and Bill established in 1964 – thank you, Don.