Columbus Avenue in Boston was originally laid out in the 1830’s parallel to the Boston & Providence Railroad tracks and has a history of transit along the corridor. In its earliest days, the roadway was shared by cars and trolley traffic. As congestion increased, street level trolley transit was replaced by the development of the underground subway system and bus routes. Fast forward to current times, and Boston was again facing significant congestion with cars and buses sharing limited space on Columbus Avenue.

The Massachusetts Bay Transportation Authority (MBTA), in partnership with the City of Boston, developed a plan for New England’s first center-running bus lanes from the intersection of Walnut Avenue to Jackson Station (nearly one mile). The project makes investments in transit equity, improves bus travel times and reliability, increases passenger safety, and provides ADA-compliant features at the new platforms and thorough the corridor. These center-running bus lanes eliminate conflicts with automobile traffic in the area, and benefit bus riders, pedestrians, and the neighborhood as a whole. Buses operate in the center lanes of the streets, a design that transit experts have long championed as the best way to move buses most efficiently and effectively in congested roadways. The project incorporates elements of Bus Rapid Transit (BRT) as well as Bus Transit Priority technology. These upgrades result in less crowding on the buses and faster, more reliable trips (riders save four to seven minutes along the corridor) in a post COVID-19 world. 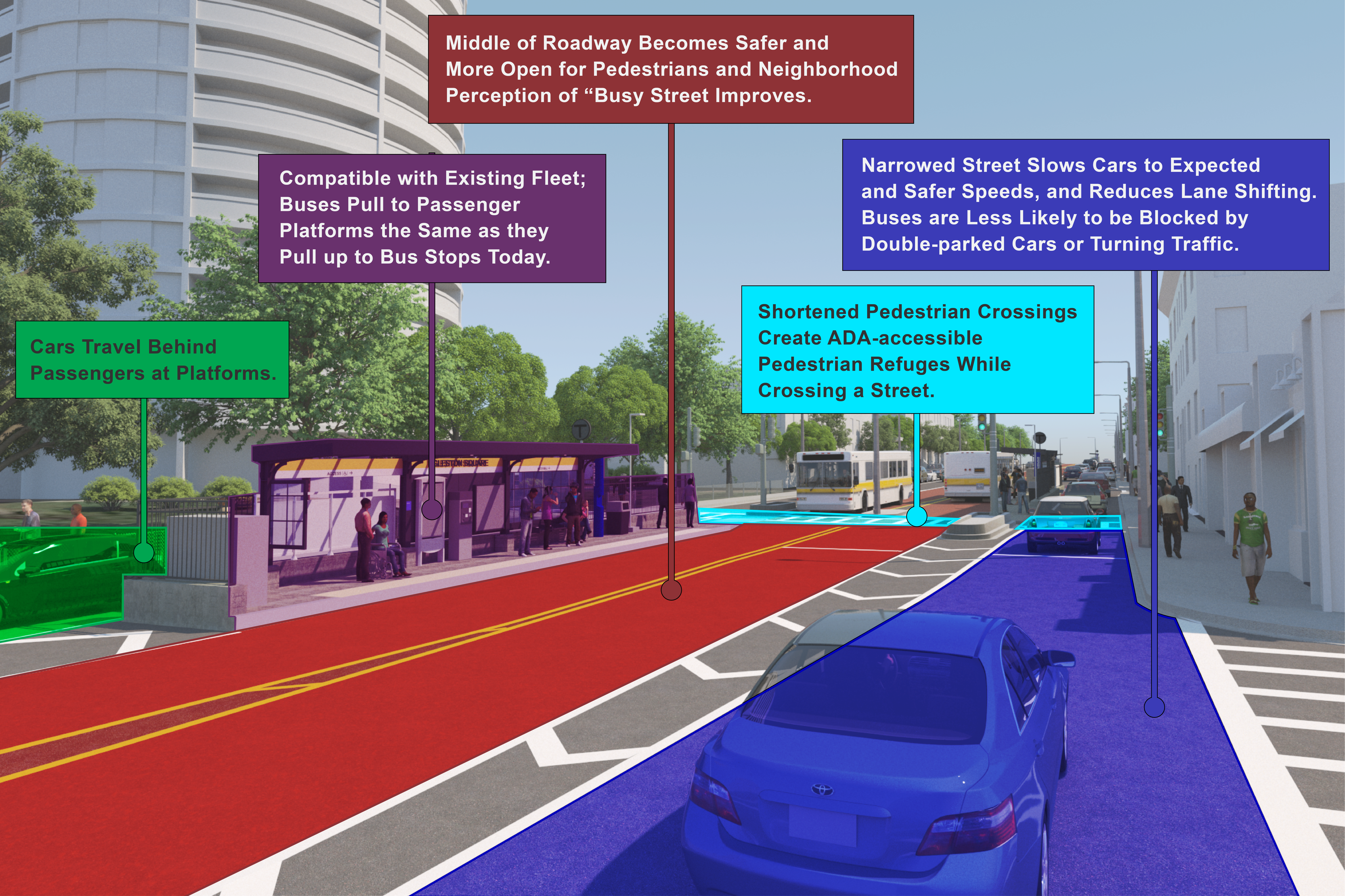 This $13M project was designed, permitted, and constructed in 24 months, during the pandemic. A typical timeline for a project of this magnitude would take five years to procure, design, permit, and construct. However, the MBTA utilized rapid procurement through on-call design and construction contracts, as well as over-the-shoulder design review to accelerate and deliver this transformative project to the public in nearly half of the time.

Howard Stein Hudson (HSH) teamed with WSP Global (WSP) and HDR Inc. (HDR) to provide a variety of services. Utilizing an existing MBTA on call design contract, HSH was identified as the lead design firm for the Columbus Avenue corridor. 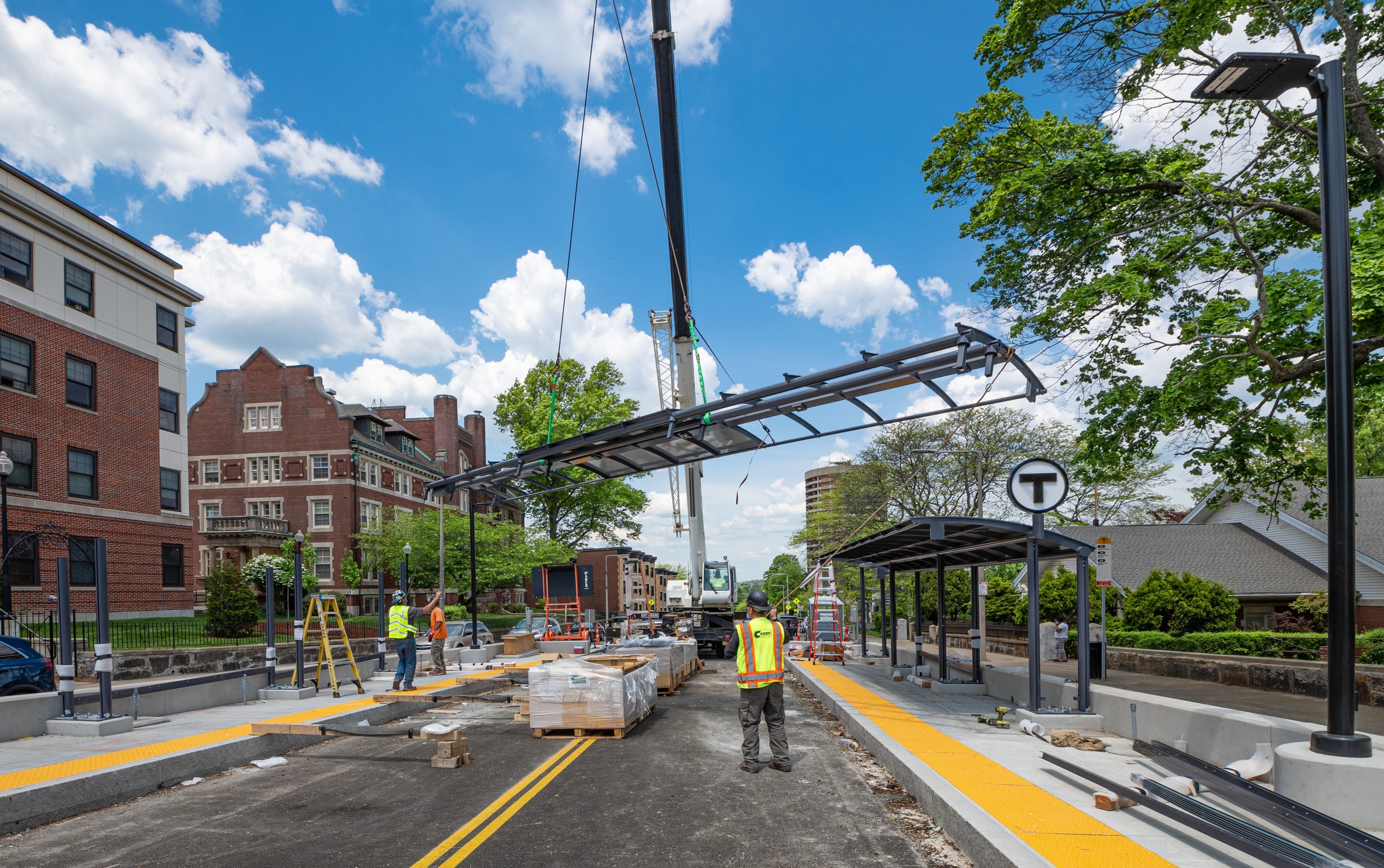 In addition to the technical design efforts, HSH facilitated a robust and challenging interagency and interdepartmental coordination process during project development to rapidly plan, permit, and approve the project. HSH and the MBTA Project Manager coordinated dozens of over-the-shoulder design review meetings to resolve comments between various departments, including but not limited to:

There were additional challenges encountered on this project beyond the aforementioned coordination. Fulfilling the shared streets initiative within the City of Boston was difficult along this urban corridor due to limited right of way available for the project. Early identification and agreement between the City and MBTA of Columbus Avenue becoming a priority transit corridor led to the center running bus lane concept.

While the project does not include specific bicycle accommodations, it does not preclude the addition of future amenities by the City should the existing parking conditions be revisited along the corridor. HSH provided numerous side-running and center-running concepts, along with corresponding traffic analysis, to the MBTA and the City to inform their ultimate decision to prioritize transit along the center of this busy corridor.

Identifying ownership of the existing and new infrastructure also required significant discussion between the MBTA and the City. While the MBTA led this infrastructure improvement project, they were in a unique position of not owning the existing infrastructure. The MBTA owns the bus platforms, bus transit signals, and bus lanes (paint); the City owns the streets, sidewalks, pedestrian ramps, vehicular lanes, parking lanes, and signal equipment. HSH provided detailed construction cost estimates and roll plans identifying ownership and maintenance responsibilities so that the MBTA and City could develop a Memorandum of Understanding (MOU) and division of construction costs. 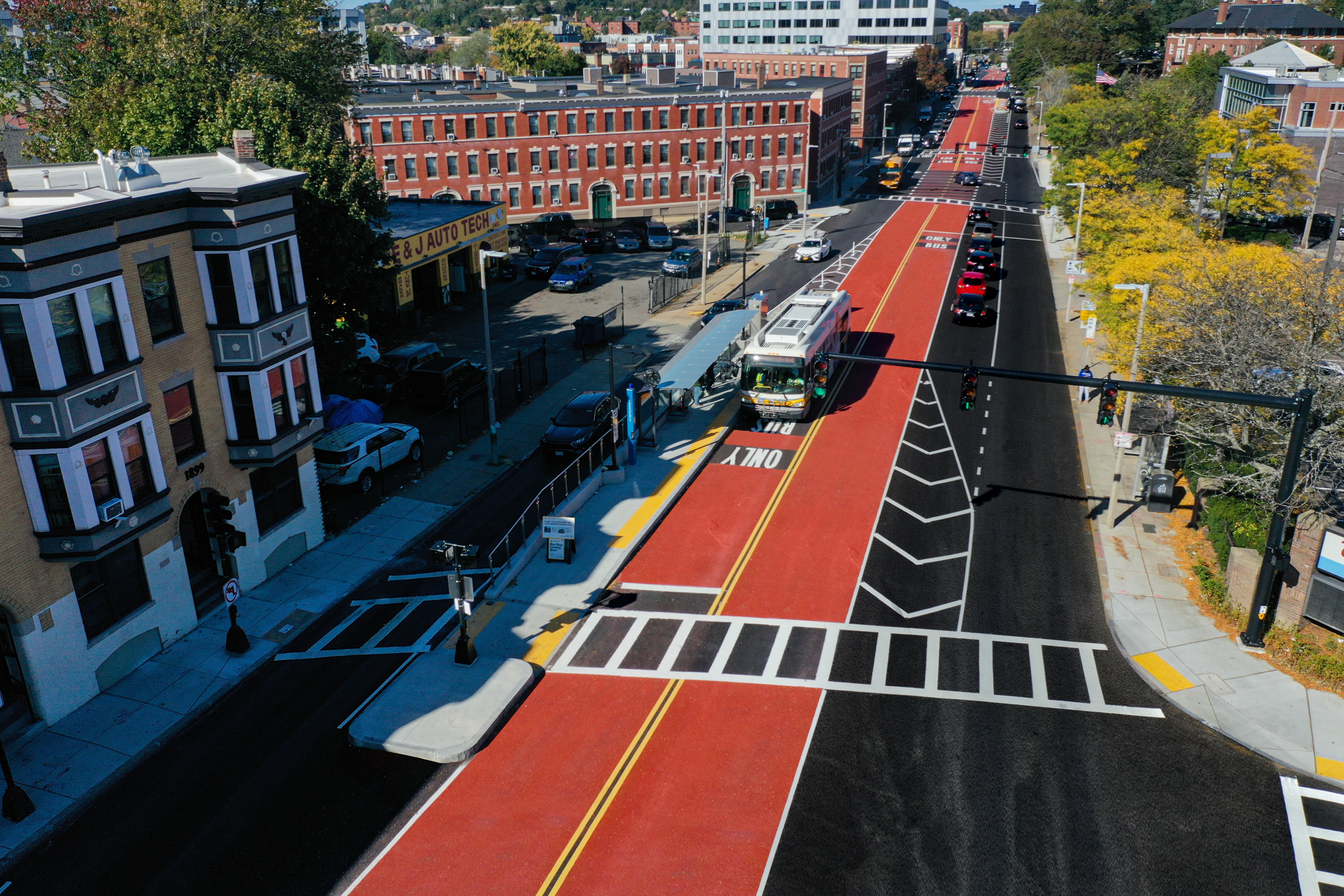 Construction of New England’s first center-running bus lanes was completed in October 2021. The project made investments in transit equity, improved bus travel times and reliability, increased passenger safety, and provided ADA-compliant features at the new platforms and throughout the corridor. These upgrades result in less crowding on the buses and faster, more reliable trips (riders save four to seven minutes along the corridor) in a post COVID-19 world.

The complex project was deemed a major success by the MBTA; so much so, that the MBTA has initiated design and secured construction funding to extend the center-running facility from its northern terminus at Jackson Square Station further north, more than a mile, to Ruggles Station. Lessons learned from the accelerated design and construction process will be applied to future MBTA projects with the goal of making equitable, accessible, and impactful infrastructure improvements in the future and beyond.