One Dalton Hotel & Residences: Implementation of a Ground Movement Control Measure for a Deep Excavation in Boston Blue Clay

Introduction & Project Background
The One Dalton project site in Boston, Massachusetts is an approximately 28,544 square feet triangular parcel without existing structures (Figure 1) except for an underground loading dock for the adjacent Colonnade building. Elevations refer to Boston City Base Datum (BCB). 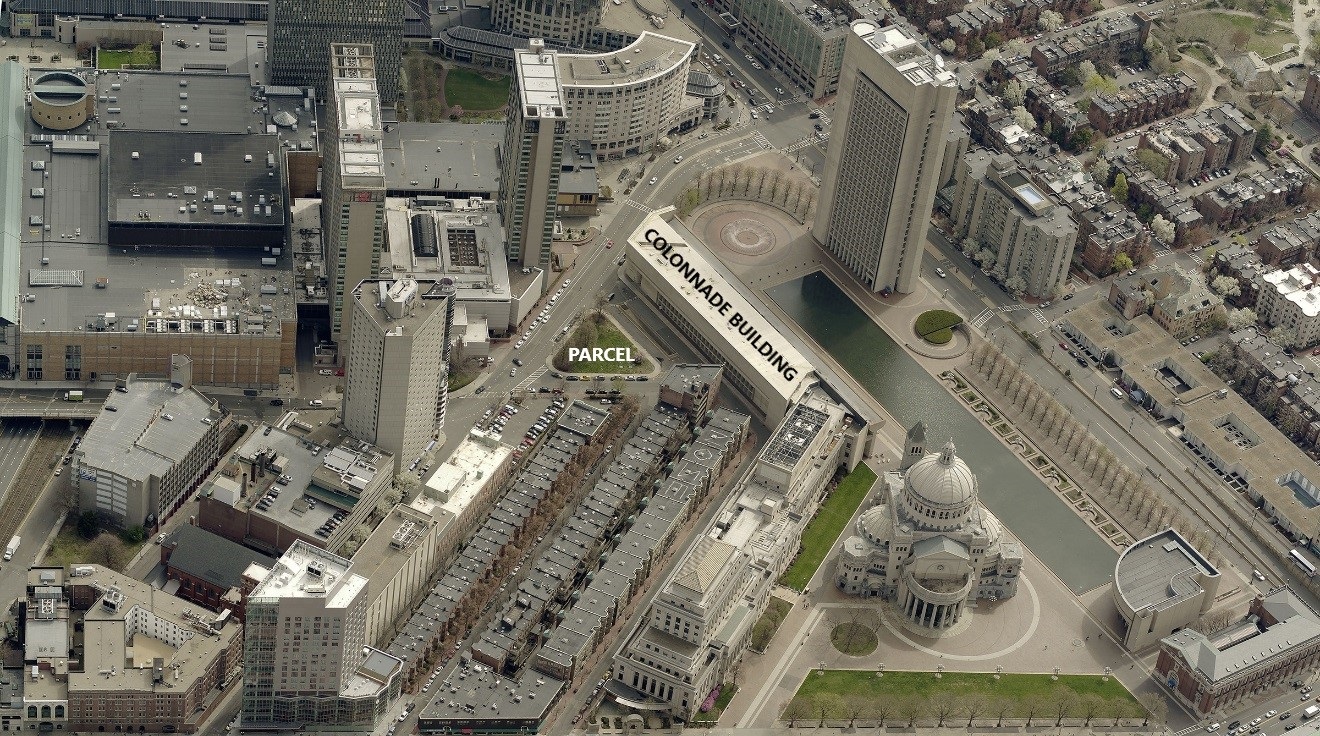 Figure 1- Aerial view of the One Dalton parcel.

The new development includes a 61-story hotel and residential tower with an at-grade footprint area of approximately 21,600 square feet and three levels of below-grade space requiring excavation to depths of up to 47 feet below site grades, with localized excavations to 55 feet, and supported on rock-socketed deep foundations.

Because of proximity to the Colonnade, supported on shallow foundations, the deep excavation required careful selection of wall and foundation construction methods and relatively stiff excavation support systems to limit ground movements and reduce likelihood of building damage. 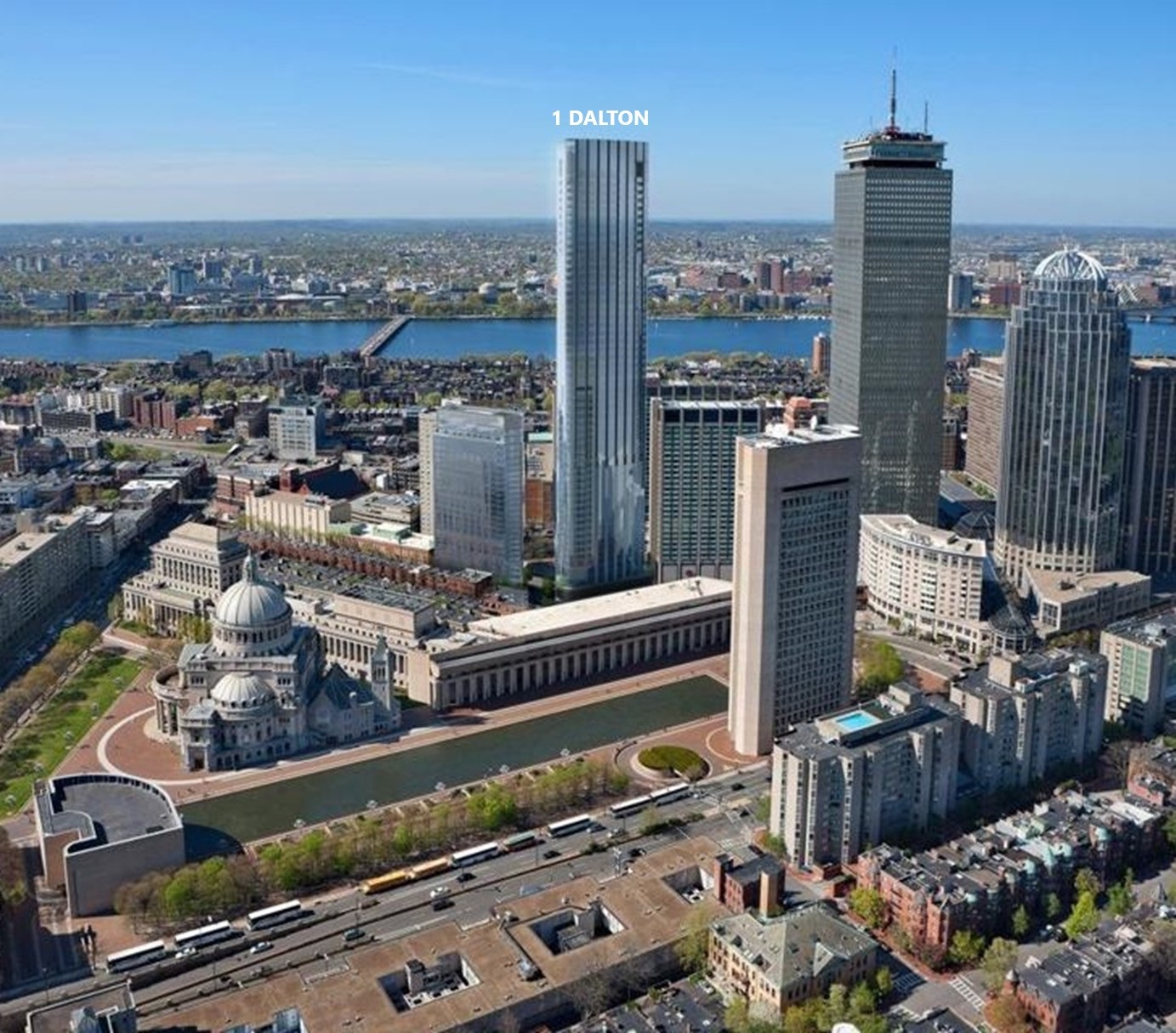 Figure 2- Digital rendering of the One Dalton tower (OneDalton.com).

Subsurface Conditions
The site is located on filled land in the Back Bay neighborhood of Boston, Massachusetts. Subsurface soil conditions observed from boring explorations are summarized in Table 1 and illustrated in the subsurface profile in Figure 3.

The excavation for the new tower terminates within the marine clay deposit, which consists of a stiff, overconsolidated clay crust 10 to 12 feet thick followed by about 115 feet of softer, slightly overconsolidated to normally consolidated clay. The undrained shear strength of the clay crust is estimated to be about 1,500 to 1,700 psf whereas the soft clay undrained shear strength is estimated to be about 1,300 psf at the top and increases with depth.

Bedrock at the site is part of the Cambridge Argillite formation and the degree of weathering in the core samples ranges from fresh to slight with zones of tuffaceous Argillite. An altered Mafic Dike was encountered at some boring locations with degree of weathering ranging from slight to high. Unconfined compressive strength of the Argillite and altered Mafic Dike test samples range from 780 psi to 12,426 psi. 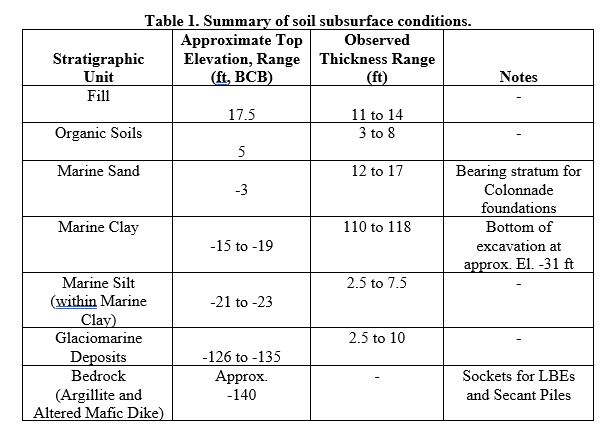 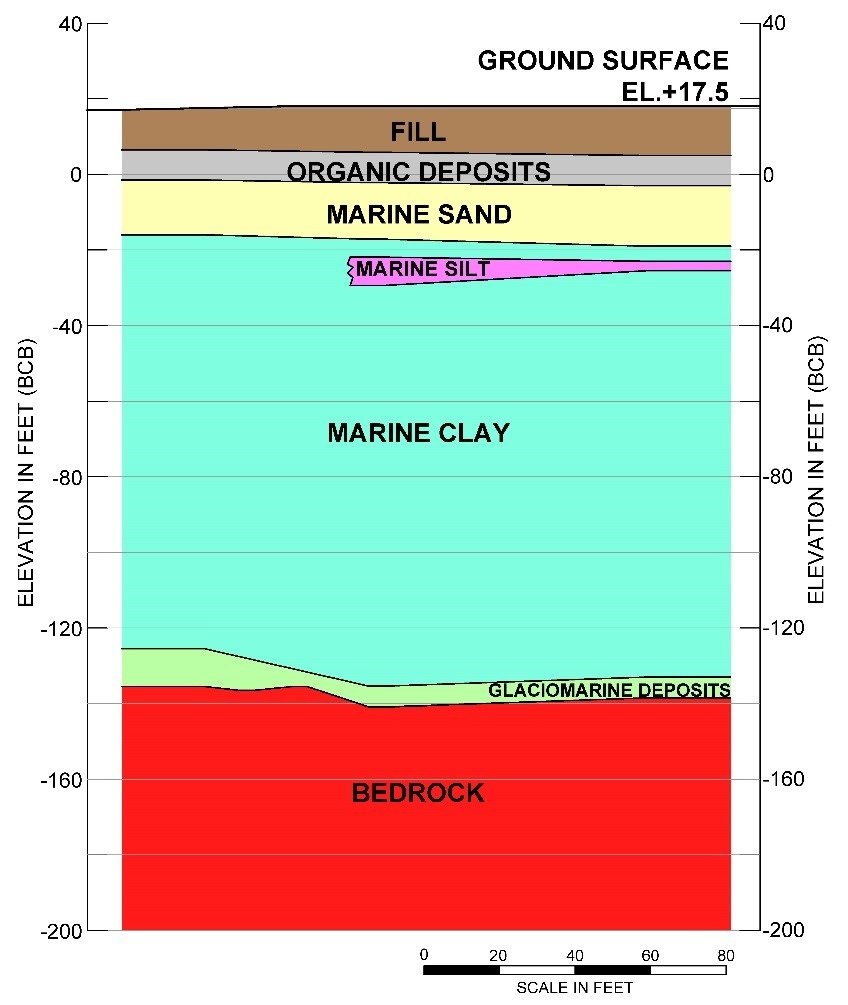 Adjacent Structures
The adjacent Colonnade Building is a five-story concrete structure supported on shallow footings and pressure-injected footings (PIFs) bearing in the marine sand layer. Available drawings indicate design bearing pressures for the foundations closest to the excavation ranging from 6,100 to 7,500 psf. The excavation for the new tower extends approximately 20 to 25 feet below the bottom of the Colonnade foundations (Figure 4). 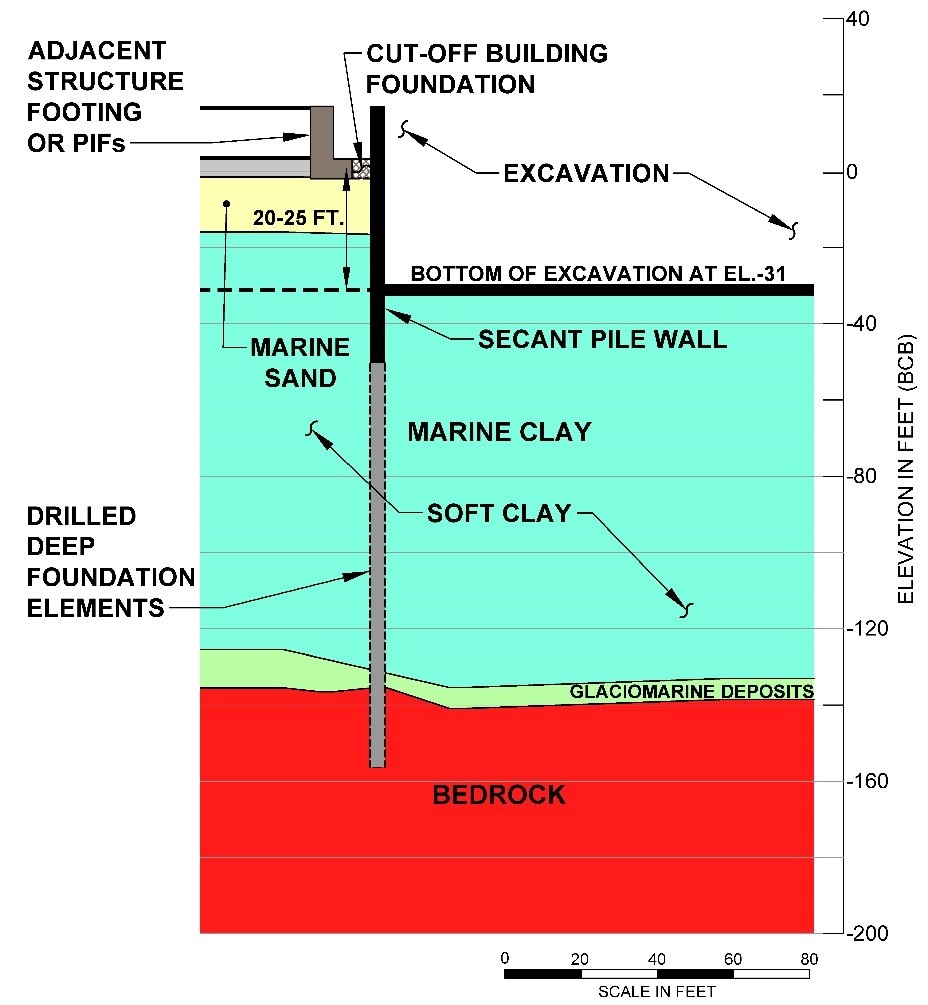 As part of the new development, the loading dock connected to the Colonnade was demolished and portions of the building’s foundations protruding into the site were saw-cut and removed.

LBEs are reinforced concrete elements consisting of one or more rectangular slurry wall panels approximately 2.5 feet or 4 feet wide by 9 to 10 feet long. The exterior LBEs extend from ground surface into rock, the interior LBEs extend from the lowest basement level into rock. LBE rock socket lengths range from 10 feet to 19 feet with geotechnical compression load capacities up to 12,500 kips for a single rectangular panel and 16,500 kips for a cross-shaped element.

The secant pile wall is composed of overlapping 39-inch diameter piles with an embedded W24x176 steel section every other pile. These elements also extend to approximately El. -48.

The LBEs and slurry wall elements were installed from existing site grades using slurry trench methods. Each LBE panel was excavated under slurry using a clamshell bucket (in soil) or a hydromill (in bedrock). The steel reinforcement cage was then lowered into the hole and the panel was filled with 7,000 psi concrete using tremie methods.  A wide-flange steel section was utilized as an end-stop in primary panels. LBE panels were installed in a sequence where no two adjacent panels were open at the same time, with consideration for concrete curing times.

The secant piles were drilled from existing site grades using a full-depth temporary casing and concreted prior to pulling the casing to minimize ground loss. Cased installation was used because the potential for loss of ground and the resulting settlement of the Colonnade were a major concern.

Below-Grade Construction and Subgrade Elements
The original planned excavation and bracing sequence consisted of three to four main cuts, each about 10 feet to 13 feet deep. No additional bracing was initially planned below the bottom of excavation, and grouting under the Colonnade foundations was contemplated. Finite element analysis of the staged construction predicted a lateral deflection of the secant pile wall adjacent to the Colonnade of about 1.7 inch without the subgrade elements.

The predicted lateral deflection raised concerns about potential excessive settlement of the Colonnade. Further analyses indicated that additional lateral support below the base of the excavation, placed before the excavation reached the lowest level, could help control deflections. After discussions between the project team and the owner, and considering the construction schedule and equipment that would be available on site, it was decided that subgrade lateral support elements composed of unreinforced rectangular concrete slurry wall panels be installed below the bottom of the excavation to act as struts or buttresses to provide increased lateral support for the embedded portion of the wall.

Figure 6 shows the locations of the seven subgrade elements. Five elements, acting as buttresses, extend approximately 30 feet from the secant pile wall and terminate in soil to avoid lateral load transfer to other structural elements.  The buttresses were sized based on skin frictional resistance between the concrete and the clay along the sides and bottom of the elements.  The other two elements act as struts/corner braces extending from the secant pile wall to LBEs on the adjacent side. 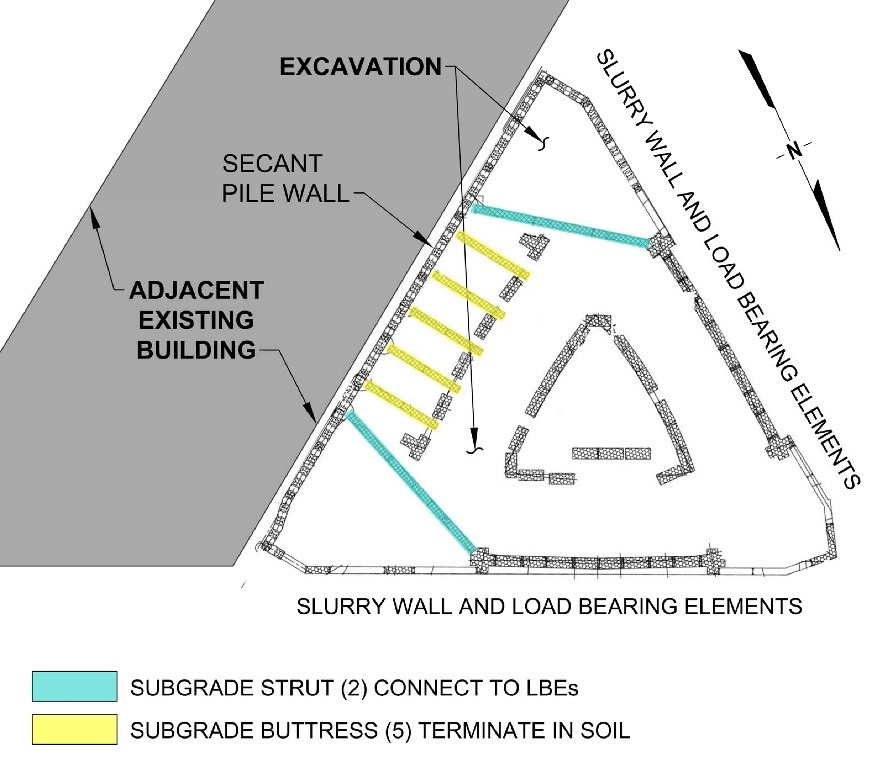 The secant pile wall and foundation elements were installed from existing site grade prior to mass excavation. The first cut was performed to El. +2 feet and then the subgrade elements were installed from this elevation using slurry trench methods. For each subgrade element, a trench was excavated under slurry to El. -47 feet and tremie concrete was placed up to El. -31 feet. Cement bentonite was then used from El. -31 up to El. +2 to facilitate removal during mass excavation. Each subgrade element is 2.5 feet wide, 16 feet deep and composed of unreinforced concrete with compressive strength of 2,500 psi. Positive contact between the secant pile wall and subgrade element was achieved by using a clamshell bucket with one scalloped side that followed the surface shape of the secant pile wall.

After the subgrade elements were completed, the first level of bracing was installed prior to mass excavation below that level. Mass excavation was conducted in three stages of excavation followed by brace installation. Temporary internal bracing (corner and cross-lot bracing) was installed at El. +10, -3, and -16 feet, and consisted of 36-inch diameter steel pipe elements preloaded to 50% of their design brace load. The bottom of excavation was approximately El. -31 feet next to the secant pile wall. Figure 7 shows a cross section of the secant pile wall and subgrade element after the final excavation stage.

A 6-in. thick concrete mud mat was installed after reaching the bottom of excavation, after which temporary bracing removal and floor slab installation was done in three stages. Floor slabs were installed at El. -31, -11, and +4.4 feet.

Tiltmeters are used to measure the tilt angle of a surface about an axis, and were installed on the fifth floor of the Colonnade.

Inclinometers were read frequently when excavation was undertaken adjacent to the secant pile wall. Colonnade Building reference points were optically surveyed weekly. The automated total station equipment and the tiltmeters recorded data continuously and uploaded them to a web page for the project team’s use. Figure 8 shows the instrumentation location plan. 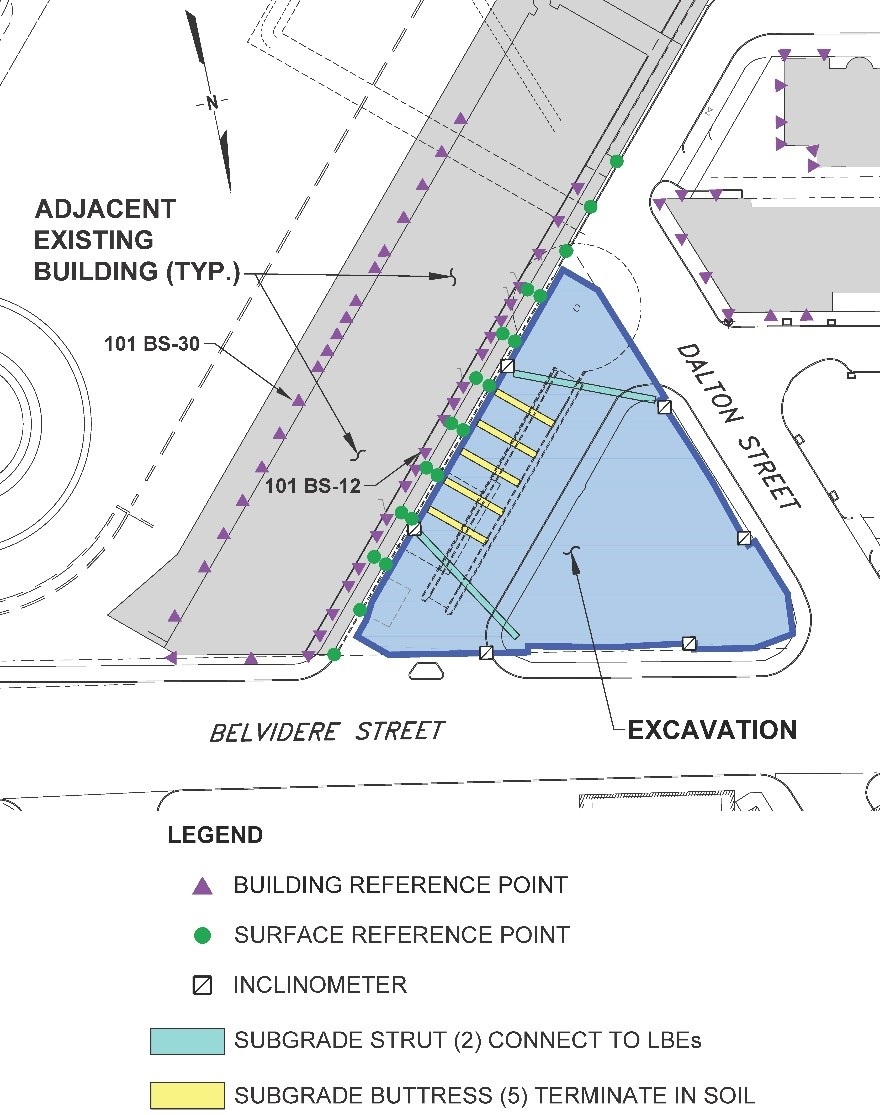 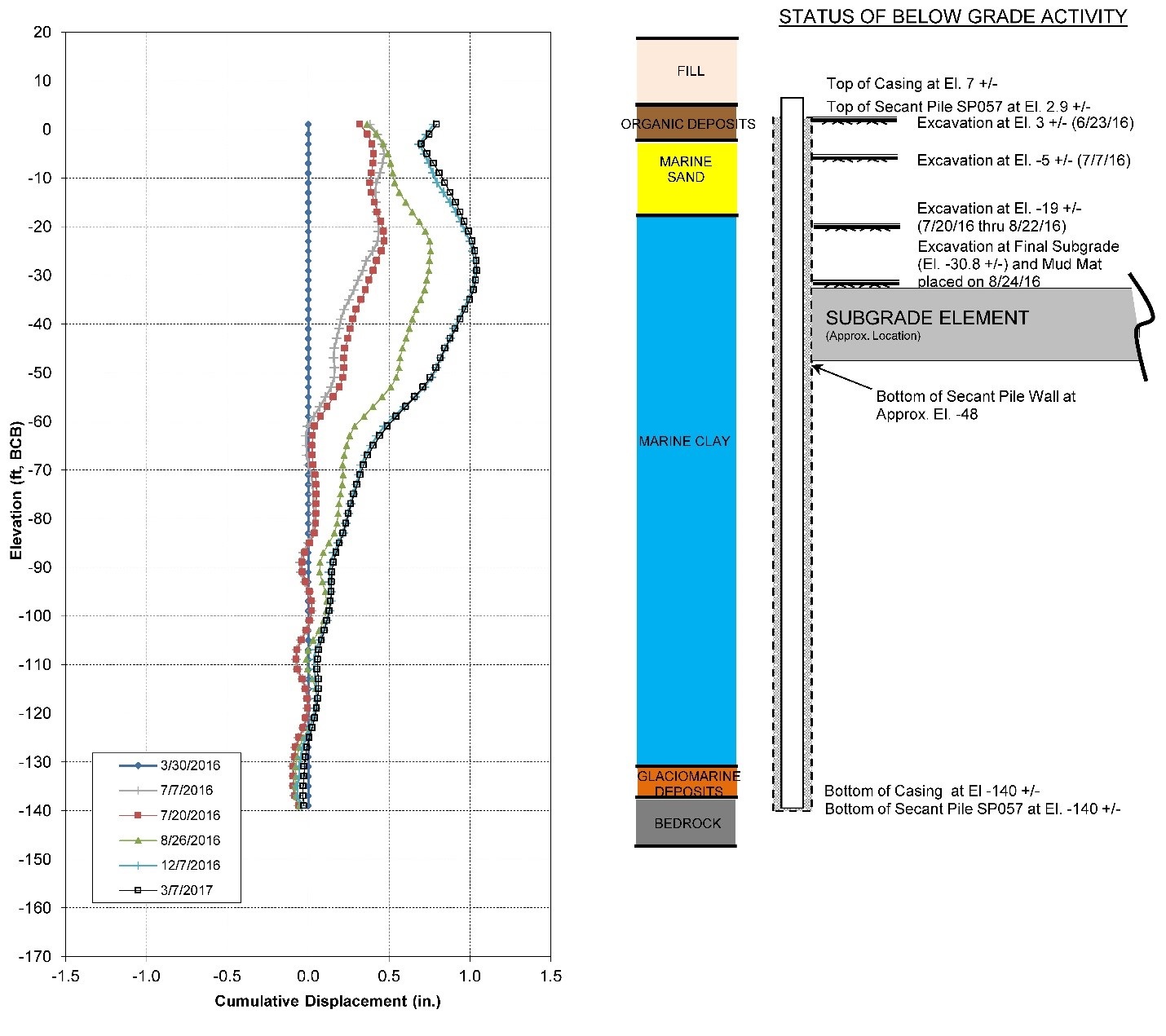 Figure 10 shows the settlement at survey points 101-BS-12 located along the column line nearest the excavation and 101-BS-30 located on the eastern side of the Colonnade, along with relevant construction stages. At 101-BS-12, secant pile installation resulted in about 0.4 inches of settlement. Excavation and bracing installation for levels 1, 2, and 3 (L1, L2, and L3, respectively) each added about 0.1 inch of settlement (total of 0.3 inches). Final excavation to the bottom elevation added another 0.2 inches of settlement. Further settlement occurred after final excavation. In total, the measured settlement at 101-BS-12 was about 1.1 inches. At 101-BS-30 on the other side of the Colonnade, the measured total settlement was about 0.2 inches. 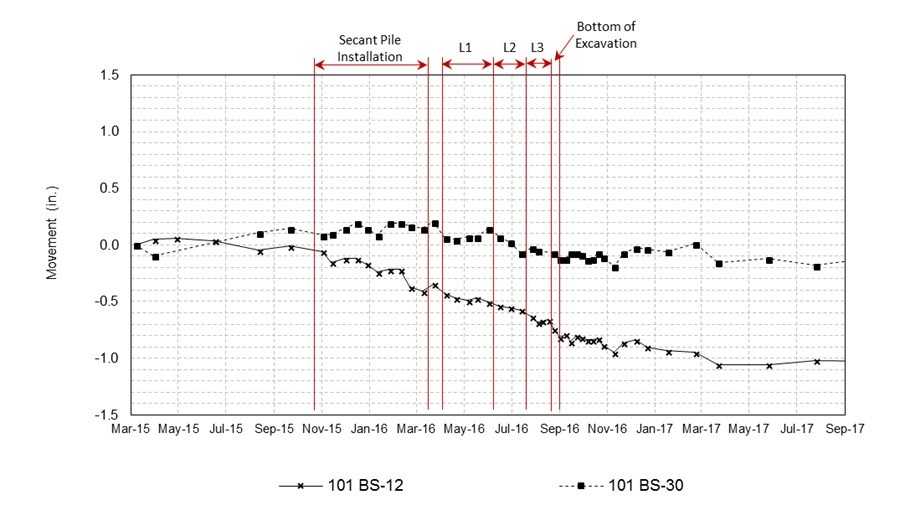 Conclusions
The deep excavation extended below the stiff clay crust that would have provided increased lateral support at the bottom of the wall. Removal of this stiff clay layer increased the risk of excessive lateral movement of the secant pile wall and settlement of the adjacent building. Staged construction analyses indicated that lateral wall support below the base of the excavation would limit movements if installed prior to mass excavation. Concrete subgrade elements were selected as the most feasible solution given the project parameters (e.g., schedule, mobilized equipment, and cost). Seven subgrade elements were installed to brace the secant pile wall below the bottom of excavation prior to mass excavation. The subgrade elements successfully limited the lateral deflection of the secant pile wall to about 1.0 inch and the settlement of the Colonnade foundations to about 1.1 inches. About 50% of the Colonnade settlement occurred during secant pile installation (i.e., before mass excavation).

Should you wish to contact any of the authors, Mark Haley, Jean Louis Locsin and Jesse Siegel all work out of Haley & Aldrich, Inc's Boston office, which is located at 465 Medford St., Suite 2200, Boston, MA 02129. Their email addresses are as follows: mhaley@haleyaldrich.com, jlocsin@haleyaldrich.com, jsiegel@haleyaldrich.com.