For two centuries, the Union Street corridor has served as the centerpiece of New Bedford’s downtown.  It is originally thought that Union Street (once known as King Street for King George III) was renamed in honor of the successful defeat of the British Crown during the American Revolution, but the corridor also exhibits the truth in its name -  Union Street threads together all of the area’s various uses. Beginning on the working waterfront at State Pier, it extends through the historic neighborhood alongside the New Bedford Whaling National Historic Park into the heart of the city’s retail, cultural, and government districts to the grand whaling mansions on County Street. From there it proceeds through several historic neighborhoods, terminating at Buttonwood Park, home of one of the finest small zoos in the U.S. Union Street businesses attract many tourists who stopover during their passage from New York, Connecticut, and Rhode Island to the Cape and Islands. Union Street provides access to the Zeiterion Theater (The Z), Wing’s Court, Custom House Square, the University of Massachusetts (UMass) College of Visual Arts and the James Arnold Mansion; and pre-pandemic, it served as one of the main participant areas for AHA! (Art, History, Architecture) nights, New Bedford’s free monthly collaborative cultural event with over 60 venue partners. These destination locations have transformed Union Street and greater downtown New Bedford into a highly sought-after area to live, work, play, and invest.

With the support of a MassWorks Infrastructure Program grant in 2016 and subsequent second-phase grant in 2019, CDM Smith partnered with New Bedford to plan, design and construct Union Street through two full reconstruction phases as part of the overall revitalization efforts. Utile Architectural & Planning, a Boston-based engineering design firm, assisted CDM Smith with design standards and initial public involvement planning. Phase 1, completed in 2019, involved underground utilities and streetscape services from Water Street to Sixth Street. Construction on Phase 2 is set for early 2021 and will focus on the underground and aboveground conditions from the limits of Phase 1 to County Street.

A portion of Phase 1 borders the National Historic Park, which features historic streetlights, bluestone walkways, and amenity strips composed of a variety of treatments, from cobblestones to smaller pebbles embedded in mortar. The project was submitted to the Massachusetts Historic Commission and presented to the New Bedford Historic Commission for review. The Commission required that copperhead streetlights be installed along the lower section of Union Street and that variable amenities along the side streets of the corridor be consistent with the Historic Park treatments, mimicking the look and feel of the area’s deep history. Color-conditioned pedestrian ramps were also installed with white detectable warning panels, consistent with other Historic Park sidewalk reconstruction.

To garner important input and engage stakeholders, public outreach was critical. An initial workshop with residents and business owners and meetings with the Downtown New Bedford business group were held to gather thoughts and concerns regarding the corridor. Prior to reconstructing the existing sidewalk areas, each basement along the corridor was examined (with property owner permission) to verify if any portion of the basement extended under the existing sidewalk. The investigation uncovered supporting bolts for an existing streetlight foundation in the ceiling of one basement area under a portion of one of the sidewalks. Such areas, not deemed historic, were treated with a vertical wall and backfill in order to reconstruct the sidewalks within the city layout.

As part of the underground utility rehabilitation, the two oldest water mains (60- and 100- year-old, respectively) were fully replaced. During Phase 1, despite the known presence of shallow bedrock, the installation of the water main in a new trench was still challenging. Realizing this, installing the Phase 2 water main will include water and fire service by-pass to replace the new water main within the existing water main trench. Separating the city’s combined sewer overflow with a new drainage system is required as part of the city’s combined sewer overflow (CSO) abatement program; therefore, during phase 2 the existing sewer trunk line will be lined. 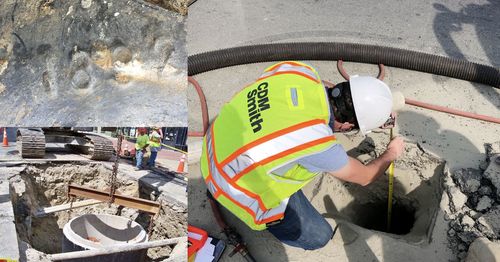 Figure 1. Phase 1 construction on Union Street involved underground utilities and streetscape services from Water Street to Sixth Street. As part of the underground utility rehabilitation, the two oldest water mains, including one that dated back to 1892, were fully replaced.

Extensive private utility coordination and cooperation was important to the overall design and construction process. As Eversource Gas replaced its existing cast iron gas main, it was critical that Eversource Electric’s primary and secondary electric feeds into the city remain undisturbed during construction. Further challenging the replacement and upgrade of existing utilities, remnant trolley tracks and cobblestones from the Union Street Railway embedded in the existing roadway needed to be removed. Finally, a privately-owned and direct-buried fiber optic line in the existing pavement was relocated along the Spring Street corridor parallel to Union Street at the beginning of the construction for Phase 1.

New Bedford’s downtown design standards include installing a 5-foot-wide brick amenity strip between the roadway edge and cement concrete sidewalks, and must include consistent trash receptacles, bicycle racks, benches, and street lighting components along the corridor. Furthering the consistent look and feel of the street furniture, the traffic signal posts were also cast in the same mold as the streetlights. To enhance the pedestrian experience, each new crosswalk includes curb extensions, as well as accessible pedestrian signals and audible push buttons at the signalized intersections. In addition to the hardscape qualities noted above, the corridor features both landscape planters and pilot rain gardens containing suitable perennial plants.

The entire Union Street project (both Phases 1 and 2) is a great example of New Bedford’s holistic approach to infrastructure improvements. It showcases the city’s goals to not only enhance a transportation corridor, but to also instill a sense of place, purpose, and sustained livability - a street whose form will mirror its function as a centerpiece of a great American downtown. 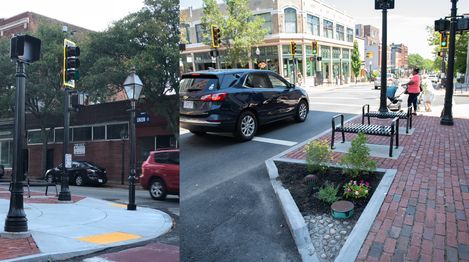