Located in Narragansett, RI and simply referred to as “The Towers,” this iconic structure is a well-known state landmark and is listed on the National Registry of Historic Places. The stone port-cochere structure that spans Ocean Road is actually the remnants of the Narragansett Pier Casino, constructed between 1883 and 1886 and at the time considered one of the nation’s most prestigious resorts during the Gilded Age. The Towers served as one of the picturesque entrances to the casino, which was an example of Victorian style shingle architecture. Today, the Towers are used as a popular function hall.

The Narragansett Pier Casino was designed by famed architects McKim, Mead & White, who also designed the Boston Public Library and the Rhode Island State House, among other well-known national buildings and landmarks and the landscaping of the grounds was designed by Frederick Law Olmstead. During the 1890’s, Narragansett was considered a top Summer vacation destination for the nation’s social elite, and the Town featured 19 luxury hotels, with the Pier Casino serving as a favored destination. The casino had a theater, reading rooms, restaurants, and ballroom with a bandstand, and the visitors to the casino participated in boating, card games, bowling, shooting, tennis, billiards, and “bathing” at the beach. Unfortunately, on September 12, 1900, a fire at the adjacent Rockingham Hotel spread to the Casino and the majority of the structure, with the exception of the granite walls of the Towers, was lost to the fire. The casino was reconstructed, again designed by McKim, Mead & White, and unfortunately that building too was severely damaged by fire in 1965.

The two towers are three stories tall, consisting of granite blocks with semicircular ends. Between the towers are two segmental arches, spanning across Ocean Road, and supporting the third story great room. A steep pavilion roof covers the third story. When originally constructed, the great room was open to the weather in the summer and served as an open café.

One final interesting note, which the author would be remiss to discuss since he is constantly thinking with his stomach, is that the Narragansett Pier Casino is popularly credited as the birthplace of the dish “clams casino”. The dish is a staple in the Italian American community and very popular in Rhode Island. Here’s a link to a pretty straightforward recipe attempted by the author (see Figure 3). So, if you’re looking for a great Summer day trip down to Rhode Island, I suggest visiting the Towers in Narragansett, finding a local restaurant that serves clams casino, and enjoying the beauty and elegance of a local landmark that serves as a symbol of the Gilded Age! 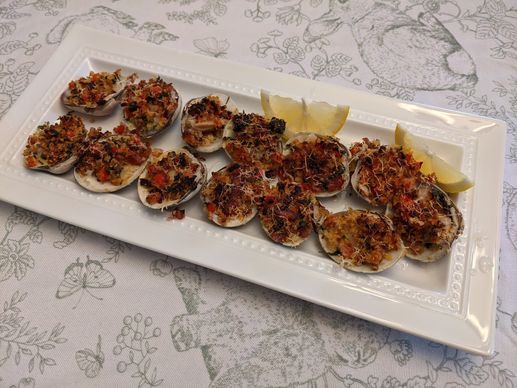 The Author's Attempt at Clams Casino