If you’re a railroad enthusiast or interested in iconic New England infrastructure, you’re likely familiar with the Canton Viaduct, also referred to by locals as the “Great Wall of Canton”. Constructed between 1834 and 1835 and designed by Chief Engineer William Gibbs McNeill and George Washington Whistler, the viaduct is believed to be the second oldest multiple-arch masonry viaduct in the U.S. Originally constructed for the Boston and Providence Railroad (B & P), today, the structure supports Amtrak’s Northeast Corridor and the Massachusetts Bay Transportation Authority’s (MBTA) Providence/Stoughton commuter rail line. 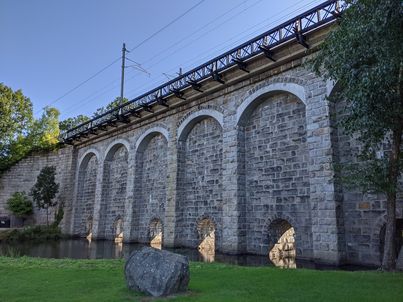 The granite structure opened on July 28, 1835 and was the last piece of the railroad route completed between Boston and Providence. The structure is 615 feet long, 22 feet wide and extends 70 feet above the surface of the East Branch of the Neponset River. The structure is not solid and instead is comprised of two parallel 5-foot-thick walls with a central 9-foot cavity. The walls are strengthened by solid buttresses spanned by granite (and now concrete) arches supporting the spandrel walls and railroad deck above. Near the base of the viaduct at the north side, six rounded arches spanning 8.33 feet allow the East Branch of the river to pass beneath the viaduct. Near the south side of the structure, two portals allow for Neponset Street to pass through the viaduct. Only one of these two roadway portals are original to the structure. The second was cut through the viaduct in 1952.

Granite from two separate local quarries were used in the construction of the viaduct, one located at Rattlesnake Hill in Sharon, now part of Borderland State Park, and a second quarry located in Canton, near today’s Cobb’s Corner. Many of the laborers working on the structure were Scottish Freemasons from local lodges. The stonecutters placed their personal marks on the stones they cut, and many such marks are visible today. The viaduct originally carried only a single track but in 1860, due to increased traffic between Boston and Providence, the decking was reconfigured, and a second track was added. In 1910, reinforced concrete arches were constructed beneath the original masonry arches to provide additional strength and support. Finally, the last major reconstruction of the structure occurred in 1995 when the MBTA and Amtrak rehabilitated the viaduct, retaining its historic integrity while making it safe for modern Amtrak electrified high-speed Acela train service. A new prestressed concrete deck was incorporated and the reinforced concrete supporting the original arches was replaced.

Why locate the railroad on this route? Apparently, the influential Joseph Warren Revere, son of the legendary American patriot Paul Revere, and founder of the Revere Copper Company, was able to sway the railroad leaders to choose a route in closer proximity to the company’s copperworks site. A spur was added to the railroad with direct access to Revere’s site. Those with interest in American history should know the Revere Copper Company was America’s first copper rolling mill, founded in 1801. It was the copper sheets from Revere’s mill that reinforced the hull of the U.S.S. Constitution and covered the original dome of the Massachusetts State House. The original plans for the railway actually included the use of inclined planes and not a viaduct, however, these were scrapped after a fatal accident on the nearby Granite Railroad in 1832, when a cable hauling a wagon with four passengers snapped, killing one and injuring the others. For these reasons, a viaduct in that location was chosen instead.

The designers of the viaduct, William Gibbs McNeill and George Washington Whistler were lifelong friends and began their friendship while cadets at West Point. McNeil served as an engineer for other railroads throughout the Northeast including the Providence and Stonington, Taunton and New Bedford, and the Boston and Albany. Whistler, father of the famous American artist James Abbott McNeill Whistler, worked on many notable infrastructure projects including serving as the chief engineer for the Proprietors of Locks and Canals in Lowell and was brought to Russia to help with the new railway between St. Petersburg and Moscow.

Finally, it’s important to mention how critical this historic viaduct is to the transportation network here in the Northeast, serving as a major link between Boston and New York City. Destruction of the viaduct would cause severe disruption to the railroad system. National Guard were dispatched to the viaduct during World War I and Canton’s Civil Defense Corps were dispatched during World War II to guard against sabotage. Security of the viaduct was also provided immediately following the terrorist attack on September 11, 2001. The viaduct has been in operation for the past 185 years. The next time you’re in Canton, please take some time to check out this important ASCE Civil Engineering Historic Landmark!