In addition to being home to two of the more well-known canals in our nation’s history, the Middlesex and Cape Cod Canal, Massachusetts is also home to our nation’s first navigable canal, located along the Connecticut River in the Town of South Hadley. With construction completed in 1795, the canal created a bypass of the river’s 53-foot Great Falls at South Hadley and provided additional upstream access for riverboats to travel along the upper Connecticut River.

Why the need for a canal at this location? The Great Falls at South Hadley presented the first major obstacle on the Connecticut River for boat traffic. Prior to construction of the canal, riverboats would need to off-load their cargo at the falls, portage overland with wagons approximately 2.5 miles and then set back on the river again. Boats would also need to portage again upriver at Turners Falls to reach farther up the Connecticut River. During these early years of our new country, overland transportation was both very expensive and required more intensive labor than moving goods via waterways. Due to the additional travel related expenses, it cost nearly double to ship goods via river between Northampton, MA and Windsor, CT than it would to ship by sea between Hartford, CT and Boston, MA. Too bad Amazon wasn’t around back then!

In 1792, a group of local businessmen came up with a plan to build a canal around the Great Falls and then build additional canals at Turner Falls, MA and Bellows Falls, VT. They formed a private company called the Proprietors of the Locks and Canals on the Connecticut River and their charter was incorporated in 1792 by Governor John Hancock. The corporate seal shown in Figure 1 bears the motto “Sic Transit (thus it passes), Public & Private Good.” Stocks were sold to raise funds for the construction venture including approximately 50% of the company to Dutch investment houses. 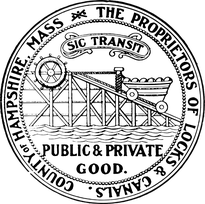 Seal of the Proprietors of Locks & Canals of the County of Hampshire, MA

It took about 3 years and some 240 labors to construct the canal at South Hadley. These men dug a 2.5-mile long by 20-foot wide trench through soft soils and bedrock using hand tools, horses and oxen, and powder for blasting rock. At the upstream end of the canal, a dam was constructed to funnel water into the canal. At the downstream end, an immense inclined plane was constructed out of stones and topped with wood (see Figure 2). Boats would be hauled up the 275-foot long by 30-foot wide ramp with chains powered by two giant water wheels to move into the upper canal. The operation to move the boats up the plane was completed in about 15 minutes. Construction was overseen by engineer Benjamin Prescott, a former engineering officer during the American Revolution and was appointed the project superintendent by the Proprietors of Locks and Canals. Prescott would later go on to engineer water supply systems for Northampton, MA and Albany, NY, and would also be the future superintendent of the Springfield Armory. 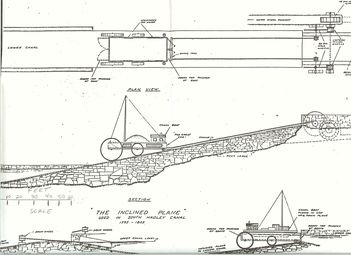 Drawing of the Inclined Plane from the South Hadley Historical Society

With completion of the canal at South Hadley and then subsequent canals at Turners Falls and Bellows Falls, boats could access about 300 miles of the approximate 400-mile total length of the Connecticut River without portaging. In 1805, a series of locks were constructed when the canal was deepened, and the use of the inclined plane was discontinued. The South Hadley Canal would be used for the next several decades until the early 1840’s amidst competition from the railroad industry. The canal finally closed in 1862 because it was no longer economical. Today, visitors to South Hadley can walk some of the original portions of the canal and visit the Bicentennial Canal Park, which serves as a historical memorial to the South Hadley Canals.