While the New Bedford Hurricane Barrier isn’t necessarily “historic,” it's still an incredibly interesting and important structure that’s provided storm surge protection to one of the nation’s busiest ports for close to 70 years, and therefore the featured topic of this month’s Historic New England Infrastructure. Since its completion and dedication on May 21, 1966, it has the distinction of being the largest man-made stone structure in the Eastern United States and the largest hurricane barrier on the East Coast.

The need to protect the port of New Bedford, the number one fishing port in the United States in terms of revenue, became necessary after violent hurricanes ravaged the region in 1938, 1944, and 1954, causing extensive damage. Initially, local interests mounted to build breakwaters in 1948, but the plan lost momentum. When Hurricane Carol, a category 3 storm, hit the region in 1954 and caused devastation to the region with a nearly 12-foot storm surge, plans for port protection regained momentum. In 1957, the Army Corps of Engineers approved and recommended the project to congress. The estimated cost of the barrier was $18 million. In July 1958, Congress authorized 70% of the construction funds for the project under the Flood Control Act, with the anticipation that 30% would be funded through local governments. The Massachusetts Legislature authorized the Commonwealth of Massachusetts to cover half of the 30% local government funds through the New Bedford Harbor Hurricane Dike Bill, which passed on June 14, 1962. Finally, the remaining construction funds were split between assessments to three communities, with the City of New Bedford paying $3.15 million, the Town of Fairhaven paying $315,000 and the Town of Acushnet paying $35,000. 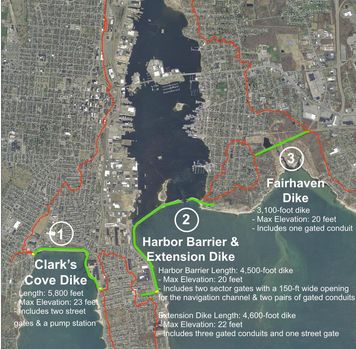 The New Bedford Hurricane Barrier rises 20’ above the surface of the water, totals about 3.5 miles in length and is comprised of three separate structures: the Clark’s Cove Dike, measuring 5,800 feet in length, the Fairhaven Dike, measuring 3,100 feet in length, and the main Harbor Barrier and Extension Dike, measuring 9,100 feet in length. There are three street gates on Cove Road, West Rodney French Boulevard, and East Rodney French Boulevard that can be closed during storm events. The dikes consist of earth and rockfill section with stone armor protection. Approximately 899,00 tons of granite rock were used for the project and was provided by a quarry in the nearby Town of Dartmouth. Some of the ocean-side rocks used on the dikes are as big as automobiles and estimated to weigh between 2.75 and 4.5 tons!

The two main barrier gates that form the Harbor Barrier span across a 150-foot wide by 30-foot deep (at low water) navigation barrier. The main bypass channel was created by dredging approximately 800,00 cubic yards of material. Each gate door weighs approximately 400 tons, is as tall as a six-story house, and can be closed in 12 minutes to seal the harbor from storm surges. These gates are closed approximately 20 times a year. The gates ride on six 27-inch diameter wheels that are 7 inches wide, and while electricity to run the gates is provided through the municipal power supply, a diesel generator is onsite in case of emergency. The concrete abutments for the gates utilized 44,800 cubic yards of concrete, were founded on bedrock and were constructed in the dry utilizing cofferdams and then dewatering the area. The entire hurricane barrier was designed for a 16-foot storm surge, or the equivalent of a category 3 hurricane at high tide. 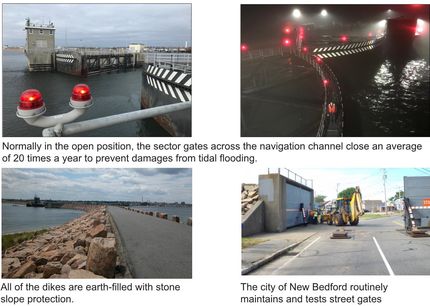 Over 1400 acres of land in New Bedford, Fairhaven, and Acushnet are protected by the Hurricane Barrier. Most of the land is thickly settled with heavy industrial and commercial properties, particularly along the waterfront and along the shores of the Acushnet River. Almost 80% of this land was heavily flooded during the 1938 and 1954 hurricanes. The majority of the Hurricane Barrier is operated and maintained by the City of New Bedford, except for the main sector gates and the navigation channel, which are maintained by the Army Corps of Engineers, and the Fairhaven Dike, which is maintained by the Town of Fairhaven.

If you’re looking for a great day trip somewhere close in Massachusetts, I highly recommend you take a trip to the City of New Bedford. Check out the Hurricane Barrier. Grab some fresh air at Fort Taber Park and the Civil War era Fort Rodman. And most importantly, don’t forget to stop at Genes Famous Seafood for some clam cakes and stuffed quahogs!