Posted 11-12-2021 2:44 PM in Featured Projects
Upon its completion on December 29, 1935, the Buzzards Bay Railroad Bridge, spanning the Cape Cod Canal and located in Bourne, MA, was the longest vertical lift bridge span in the world. Today, while relegated to second place behind the Arthur Kill Bridge in New York, the bridge serves as a vital link providing railroad service to Cape Cod. The bridge carries three railroads: the CapeFlyer, the Cape Cod Central Railroad and the Mass Coastal Railroad. The bridge was designed for the United States Army Corps of Engineers (USACE) by the New York engineering firm Parsons, Klapp, Brinckerhoff, and Douglas with the well-known architecture firm McKim, Mead, and White providing architectural input. The bridge replaced an existing Strauss trunnion bascule bridge that was built in 1910 during construction of the original Cape Cod Canal.

Original 1910 Cape Cod Rail Bridge
The original, privately-owned Cape Cod Canal connecting Cape Cod Bay to the north and Buzzards Bay to the south was built between 1909 and completed in 1916. The original canal had a maximum width of approximately 100 feet and a depth of 25 feet. During World War I, the United States Railroad Administration assumed jurisdiction of the canal following a German U-boat attack on several barges rounding the Cape and in 1928, the federal government purchased the canal with USACE responsible for operating the canal. With the nation in the throes of the Great Depression, Public Works Administration funds were provided to widen the canal to a width of 480 feet and a depth of 32 feet. With the canal being widened, all the existing bridges traversing the original canal would need to be reconstructed and would need to provide a vertical clearance of 135 feet above mean high water.
Construction of the bridge began on December 18, 1933 with a price tag of $1.56 million and funds authorized under the National Industrial Recovery Act of 1933. The new bridge was sited approximately 60 feet from the existing bascule bridge to minimize track approach realignment to the new structure. The bridge’s substructure consists of hundreds of driven oak piles with concrete and granite pier caps. Following construction of the piers, the two vertical lift towers were erected to a height of 271 feet above mean high water. The two towers support the main 544-foot center span which consists of a 16-panel truss and supports a single railroad track on an open timber tie deck. The main span was erected in the lowered position in three sections. The two side sections were constructed first and then the canal was closed temporarily for 5 days to erect the center 6 panels. All the bridge spans are composed of riveted steel through trusses. 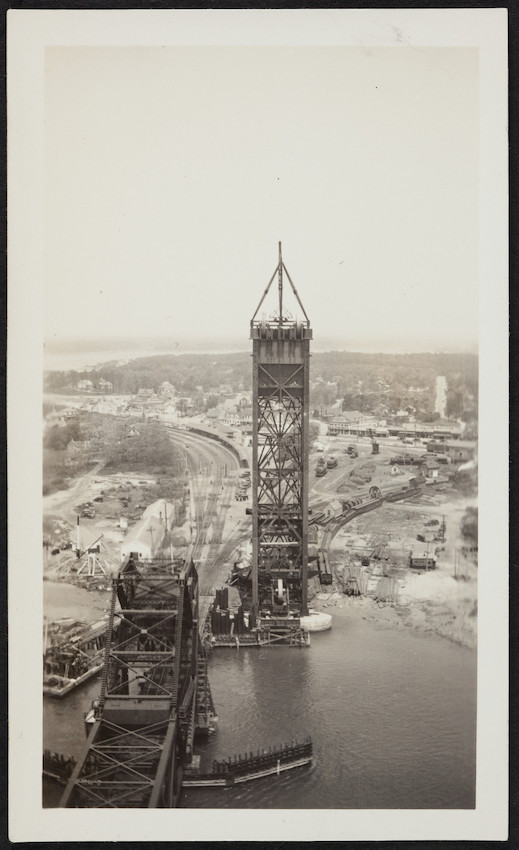 View of the south tower in construction
Photo from Nina Heald Webber Collection
The center span weighs approximately 2,200 tons and is balanced with 1,100-ton counterweights at each tower. The counterweights consist of concrete-filled steel-plated boxes and are connected to the center span and to four sheaves by 40 steel cables. The four sheaves are each over 16 feet in diameter and weigh about 34 tons. 150 horsepower electric motors are used to move the sheaves and it takes about two and a half minutes to lower the bridge into position. 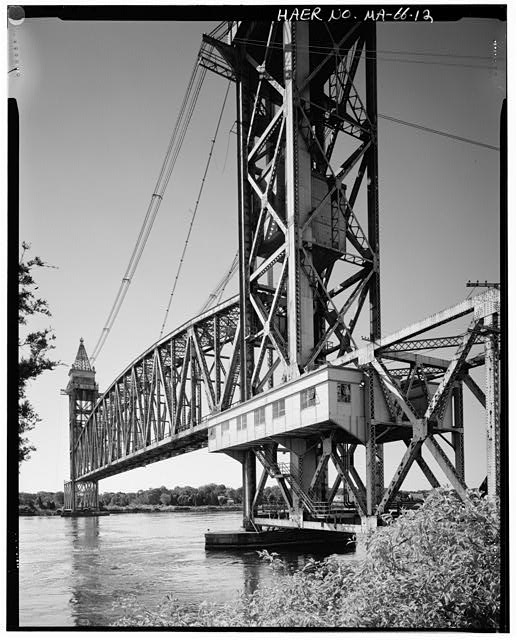 View of the north tower
Photo from the Library of Congress
To raise and lower the bridge, the bridge radio controls must coordinate with the marine traffic controls.  The marine traffic controller must verify there are no large vessels within vicinity of the bridge or planning to enter the canal before providing the bridge controller with permission to lower the center span. Smaller boats may also be susceptible to bridge collisions since the bridge in the lowered position only provides about seven feet of freeboard and therefore patrol boats are dispatched upstream of the bridge to warn smaller craft. 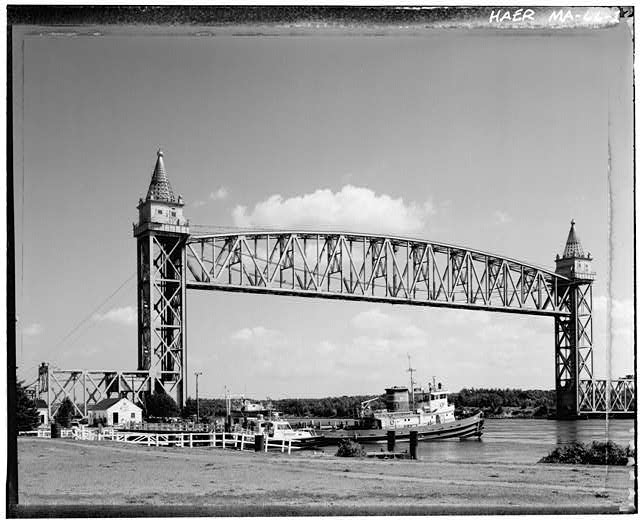 West elevation
Photo from the Library of Congress
The bridge underwent a major $30 million rehabilitation in 2002 that included structural, mechanical, and electrical components. Modjeski and Masters provided design for the bridge rehabilitation and due to the heavy commercial traffic within the canal, work had to progress while the center span was in the raised position. Temporary supports for the lift span were required to allow for replacement of the counterweight ropes. The bridge was reopened in 2003. Due to the age of the existing bridge, continual maintenance is required to keep the bridge in a state of good repair.