Logan International Airport in East Boston is one of the busiest airports in the Northeast and expects to serve over 47.6 million passengers by 2024, or 17% higher than in 2018. This increase in passenger travel will inevitably translate to a comparable increase in the traffic congestion that already plagues passengers and airport service vehicles alike; but help is already underway.

Congestion Now to Ease Congestion Later
Under the auspices of the Massachusetts Port Authority (Massport), a Capital Program for 2019-2023 was developed which highlights over 300 projects throughout the Commonwealth. This includes a multi-billion-dollar initiative at Logan International Airport, the most construction work the airport has seen at any one time in the past 20 years. Among the many individual projects is the construction of a new elevated roadway connecting Terminals B and C. The new roadway, to be constructed parallel to the existing ground-level terminal connector road, will be for the dedicated use of passenger buses and other airport service vehicles. 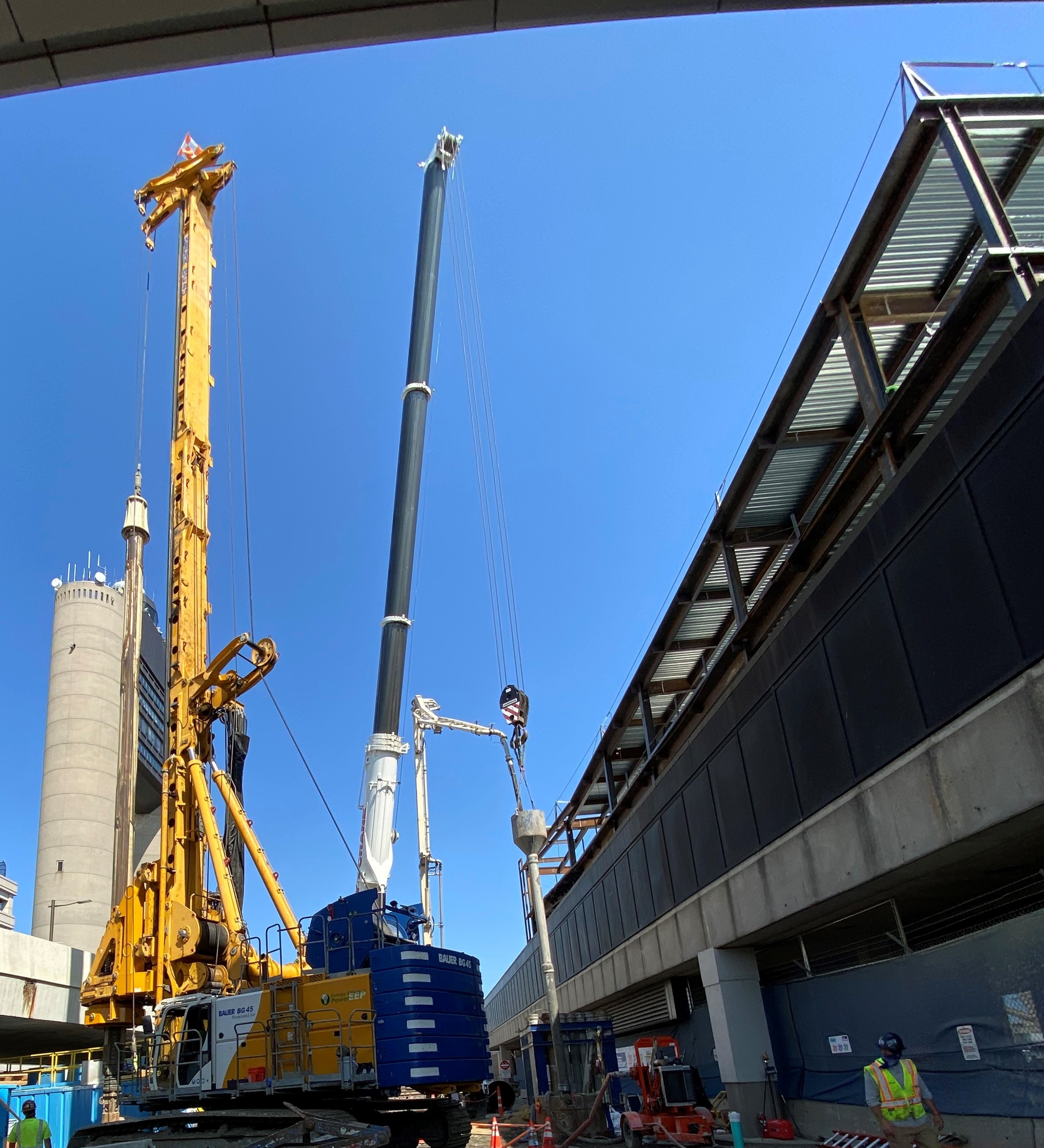 Specialty geotechnical contractor Keller was awarded the foundation work as a dual package that included drilled shafts to support the piers along with micropiles to assist with underpinning of an associated existing utility tunnel. At one pier, micropiles were also used in lieu of one of the two drilled shafts due to headroom installation limitations. Foundations to support the elevated roadway piers were required to be installed in a narrow work corridor some 50 ft wide, with headroom limited to 20 ft in places.

Drilled Shafts
Generally, the subsurface conditions at the project site consist of 20 ft of overburden followed by a variable thickness of Boston Blue Clay (BBC).  The BBC thickness ranges from about 20 to 120 ft deep and overlays glacial till, weathered rock and competent argillite bedrock.  The project design documents indicated eight piers to be installed at approximately 100-ft intervals along the elevated roadway alignment.  Each pier was supported on two drilled shafts.  Lengths of the drilled shafts extended to a maximum 140 ft depth below ground, depending on top of rock elevation.  Where the new roadway piers were connecting to the existing structures, head room was limited by the existing ramps.  In this particular case, and to accommodate the low head room access, one drilled shaft was replaced with four micropile foundation elements.

A polymer drilling fluid was used to maintain drilled shaft sidewall stability and to help prevent collapse during the drilling process.  There are many variables to be considered when choosing a type of drill fluid, including soil properties, groundwater conditions, equipment type and access to water. The hydrostatic head of the fluid pushes on the sidewalls of the drilled shaft, limiting groundwater and soil movement into the shaft borehole.  The drilling fluid also assists in hole cleanliness.  Soil particles that are not removed by the drill tooling are put into suspension within the drill fluid and cycled (by pump) out of the shaft.  Since the premise of the drill fluid is based on pressure, a key element in its use is the ability to maintain hydrostatic head during the entire process as fluid may be removed during excavation.

Rock sockets, 4.5 ft diameter and 5 ft long, were included in the design. To accommodate the downhole rock tooling, the rock sockets were oversized to a diameter of 5 ft.

A challenging aspect of the work was the installation of the full-length steel reinforcing steel cages, which varied in length from 95 ft to the full 140 ft. The epoxy-coated cages were fabricated off-site in two sections and trucked to the work corridor as needed. Each section was crane-hoisted and lowered into the drill hole, with the first section mechanically maintained above the casing so that the second section could be spliced while it was suspended. 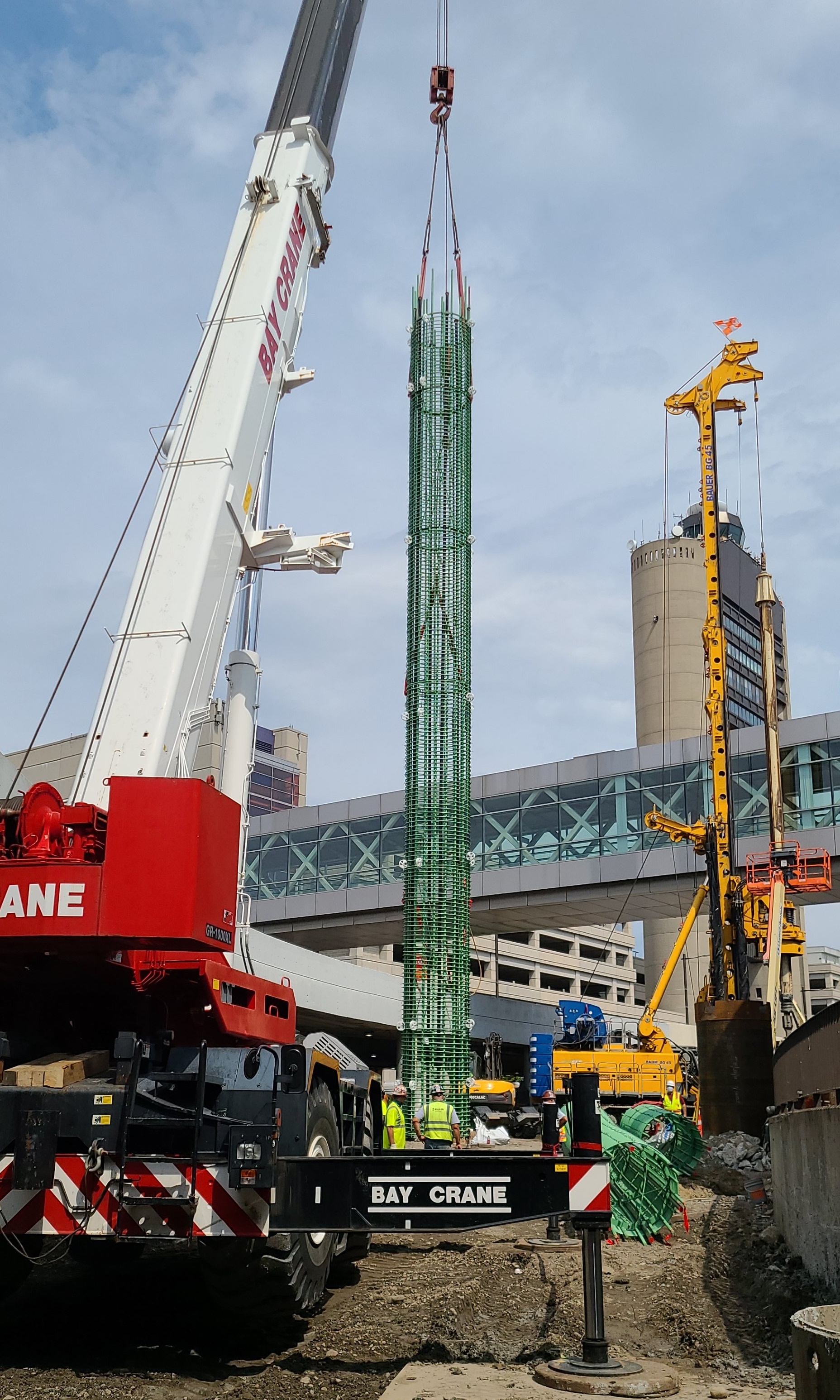 Full length reinforcement being installed in section where required

The connection details were critical since the shaft steel was designed to be coupled to the column steel. Drilled shafts are typically installed to a tolerance of three inches; however, the column steel requires a higher accuracy of one inch. This called for high level of accuracy with survey, and multiple levels of crosschecking between teams.  This shaft to column connection detail also required that when the casing was pulled after completion of the drilled shaft, a section was left in place at the top portion of the shaft to function as permanent casing.

All drilled shaft cages were fitted with access tubes for Crosshole Sonic Logging (CSL) testing to help confirm concrete integrity along the entire shaft depth.  CSL is an economical and efficient test to help contractors and designer assess concrete quality at depth.  Proper installation and maintenance of the access tubes is critical to receive quality data from the test.  On this project, each shaft was fitted with six steel tubes equidistantly spaced around the cage circumference and extending its entire length. Installation was monitored by a third-party testing agency, to ensure positioning of the CSL tubes. Once the shaft concrete had set, typically within 5-7 days, CSL testing was completed.

Micropiles
Due to low head room conditions, structural retrofits and loading conditions, 9.625-inch diameter micropiles were also used as foundation elements at several portions of this site. Micropiles were installed to rock at similar depths to the drilled shafts with 14 to 23 ft bond zones in rock.

A load test waiver was acquired for this project as load testing was recently performed at a nearby location within Terminal B.  The waiver allowed this project to assume similar design parameters without performing a full-scale pile load test.

Easing the Congestion
Close cooperation between Keller and General Contractor D.W. White Construction, Inc. was instrumental in the smooth execution of the foundation work. The shaft and micropile installation had to be coordinated with the demolition of structures associated with the control tower, which impacted the available space for drilled shaft installation in these locations. The work area was also primarily limited to drilling equipment and spoils removal.  However, Keller was able to work with the site team to stage the slurry holding tanks under the existing ramps/roadways to keep the already limited work area as open as possible. Reinforcing steel and concrete trucks were staged at an off-site yard and called to the site as needed.  Since standard ready-mixed concrete trucks could not access the work area, Keller incorporated concrete pump trucks into the delivery chain to convey the concrete directly to the hole locations.

Flying High
Throughout the project, D.W. White maintained active daily contact with Massport and the subcontractors to ensure proper coordination for equipment moves and steel and concrete deliveries, along with daily airport traffic.  This high level of cooperation allowed Keller, D.W. White, and Massport to more easily accommodate other project needs, such as low headroom conditions, changes to the shaft sequencing, and working through subsurface obstructions.  Ultimately, drilled shaft construction and micropile installation were delivered within the schedule deadlines, helping Massport to get the upgraded Logan Airport one step closer to take-off.