Posted 09-27-2022 10:10 AM in Featured Projects
The Morgan Sullivan Bridge carrying Memorial Avenue (Route 147) over the Westfield River connecting Agawam and West Springfield, MA was in fair to poor condition and a candidate for replacement. This portion of the Route 147 corridor in both towns was experiencing heavy traffic queues and was not inviting for pedestrians or bicyclists due to the lack of continuous facilities. During the preliminary design, the project morphed unexpectedly into a complete streets project which pushed the limits of what MassDOT and the towns were looking to include in similar projects at the time. What started out as a bridge replacement project has gone on to transform the area by providing continuous facilities for pedestrians, bicyclists and vehicles and acting as a catalyst for additional projects to further expand the facilities. 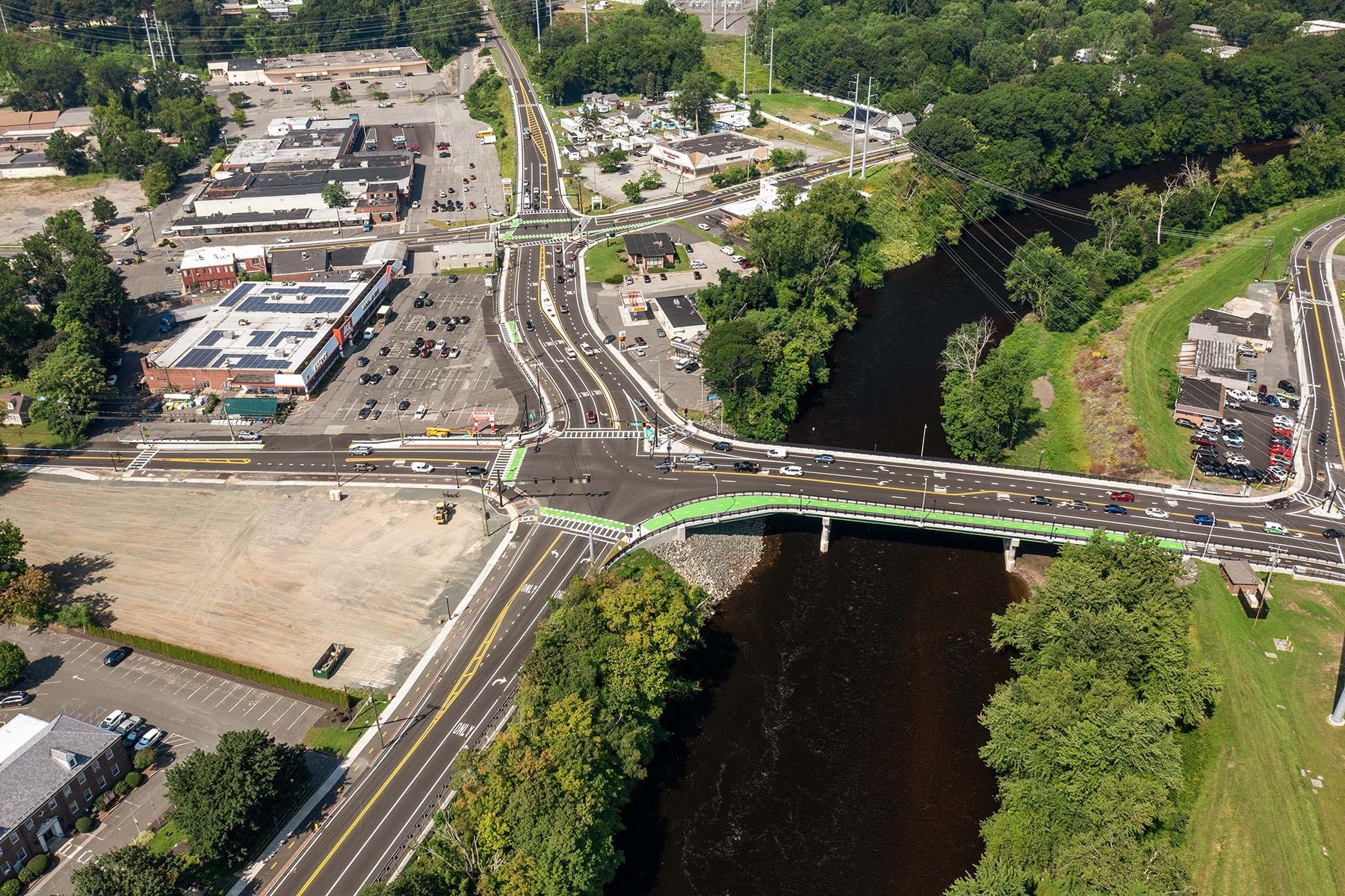 Aerial of completed project (Agawam shown)
Project Limits & Pre-Construction Roadway Context
As part of the project, the Morgan Sullivan Bridge was replaced and the following three intersections were reconstructed:

Springfield Street/Memorial Avenue (Route 147) is classified as an urban principal arterial conveying approximately 23,000 vehicles per day. The intersections within project limits had been experiencing capacity issues due to heavy turning movements. All roadways within the project limits are primarily commercial/retail with isolated areas of residential dwellings.
The Morgan Sullivan Bridge, originally built in 1946, consisted of a four span continuous steel beam superstructure spanning over the Westfield River and is located directly between two of the signalized intersections. The existing bridge carried a four-lane roadway and had two narrow sidewalks. Vehicles attempting to turn left off the bridge at either intersection often created long queues due to the lack of dedicated turn lanes.
On the West Springfield side of the bridge, continuous sidewalks existed along both sides of Memorial Avenue (Route 147) however, there were gaps in ADA compliant sidewalks, creating safety concerns for pedestrians in the area. On the Agawam side of the bridge, continuous sidewalks were only present along one side of Springfield Street (Route 147) and Main Street (Route 159). The gaps in continuous sidewalk and ADA compliance created safety concerns for pedestrians attempting to access businesses along the north side of Springfield Street (Route 147). 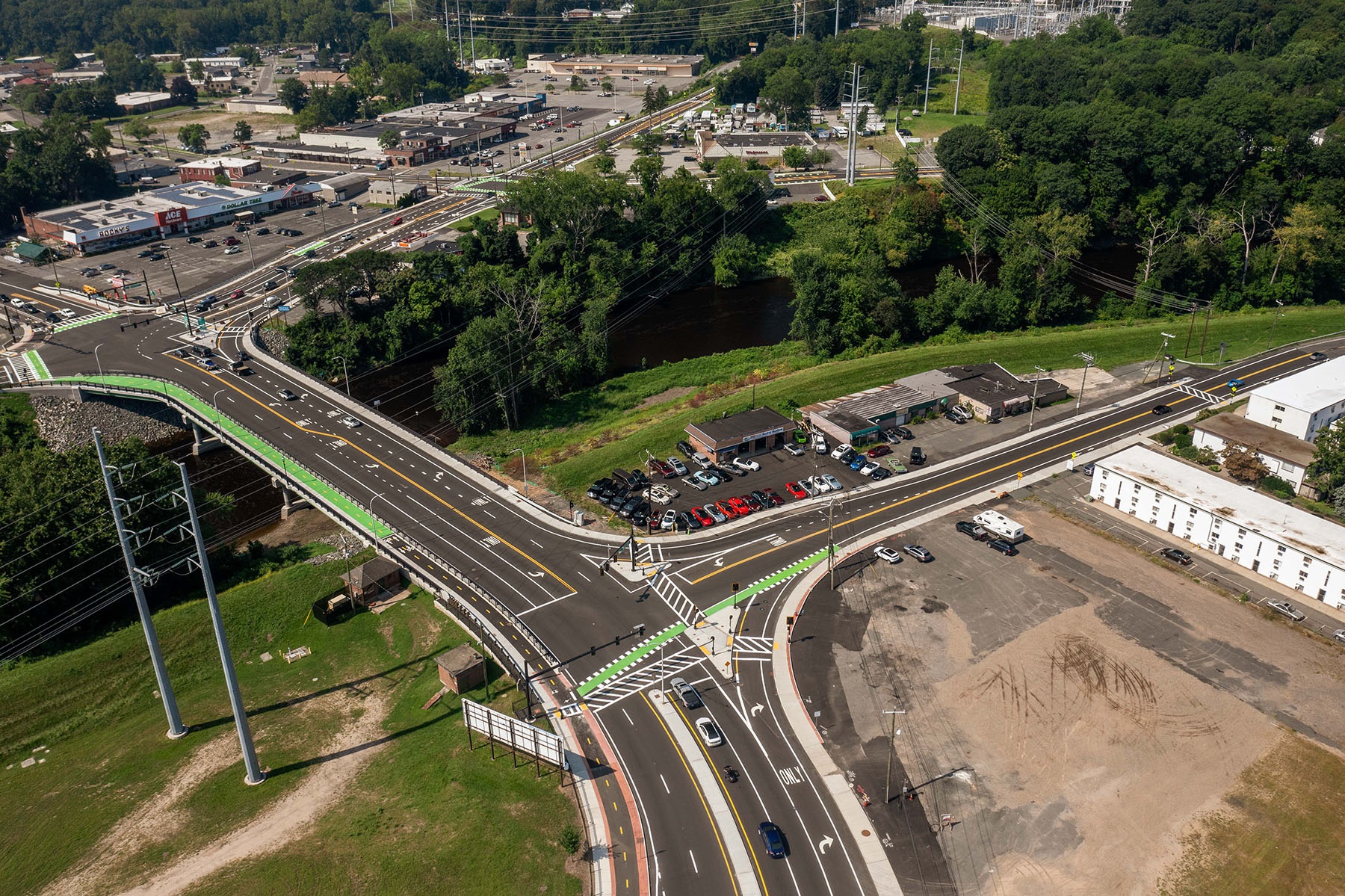 Aerial of completed project (West Springfield shown)
There were no bicycle facilities in the area , except for a portion of Main Street in Agawam which provided shoulders with widths that were acceptable for bicycle accommodation. Otherwise, bicyclists were limited to sharing the roadway travel lanes with vehicular traffic.
For 17 days in September, West Springfield hosts the Eastern States Exposition (aka “The Big E”), which is the 5th largest agricultural fair in the nation with representation from all New England states. The fair creates a surge of over 1.5 million attendees over the course of the event. Many businesses, civic buildings and even private residents offer paid parking for attendees willing to walk a bit rather than wait in traffic to park on-site. Gate 1 for the fair is located on Memorial Avenue (Route 147) approximately 550 feet north of the River Street intersection. Growing up in north-central Connecticut, I used to attend the fair every year with my parents. I vividly remember parking at the Roberta Doering Middle School on Main Street (Route 159) in Agawam and fighting our way to get to the Big E entrance, often times being required to walk in the roadway shoulder due to the large crowds.
Complete Streets Implementation
At the 25% submittal for the project, the design addressed the existing gaps in pedestrian facilities, however, the project did not include bicycle accommodations beyond roadway shoulders.  At the time, MassDOT’s Separated Bike Lane Planning & Design Guide had not been released, however MassDOT had announced their statewide mode-shift goals and issued the Healthy Transportation Policy P-13-0001. Thanks to the advocacy of the Agawam Town Engineer and the mode shift goals and policy at MassDOT, the project team was able to gather all the stakeholder’s needs and completely revise the 25% design to include a two-way separated bicycle facility along the southern side of Springfield Street in Agawam and the eastern side of Memorial Avenue in West Springfield. In addition, the proposed bridge design continued the two-way separated bicycle facility full length of the bridge. This was to become one of MassDOT’s first bridges to include such a facility.
Complete Streets Elements Included in the Project
As part of the complete streets implementation, special care was taken by Benesch to ensure the highest level of accommodation could be achieved while balancing the construction costs and impacts to abutters. At the time, two-way bicycle lanes, two-stage turn boxes and bicycle signals were not widely implemented in Massachusetts therefore not many local precedents existed as a reference. As the design progressed, Benesch worked closely with both towns and MassDOT to implement not only the two-way bicycle facility but the welcome inclusion of bicycle signals, bicycle crossings and two-stage bicycle turn boxes while maintaining horizontal separation from the pedestrian facilities.
In the final condition, the existing roadway was transformed by widening for added vehicular capacity, providing dedicated turn lanes at each signalized intersection where needed, as well as new medians and channelizing islands for increased safety, traffic calming and pedestrian refuge.
The two-way bicycle facility is horizontally separated from both pedestrians and vehicles by a brick or stamped concrete buffer, allowing clearly delineated zones for each mode of travel. Additionally, the bicycle facility is maintained at sidewalk level full length beyond the intersections, providing a vertical separation from vehicles. At the intersections where vertical separation was not possible, green bicycle crossings, bicycle signals and two-stage turn boxes were implemented. These elements were critical to maintaining clear separation between bicycles and vehicles, as well as alerting drivers to any conflict points with bicyclists.
On the bridge, the bicycle facility was designed to have a 3” vertical separation from the pedestrians since the proposed bridge width could not accommodate an adequate horizontal buffer. In lieu of a horizontal buffer between bicyclists and vehicles, a crash tested curb rail and bicycle rail was installed. Due to the monolithic material and color of the proposed sidewalk and bicycle facility on the bridge, green friction surface was installed full length of the bicycle facility to provide a visual cue for space allocation.
Benefits to the Community and Beyond
By providing new sidewalks on both sides of Springfield Street (Route 147), new pedestrian connections to businesses were made that did not previously exist, promoting walkability in this area of Agawam. The addition of a two-way bicycle facility, and bicycle crossings at signals, created new connections and paths to promote bikeability to businesses and the Roberta Doering Middle School. The sidewalks and bicycle facility continue to encourage safe, efficient, and predictable paths of travel for residents of all ages, whether in a social group or running errands at the various businesses. 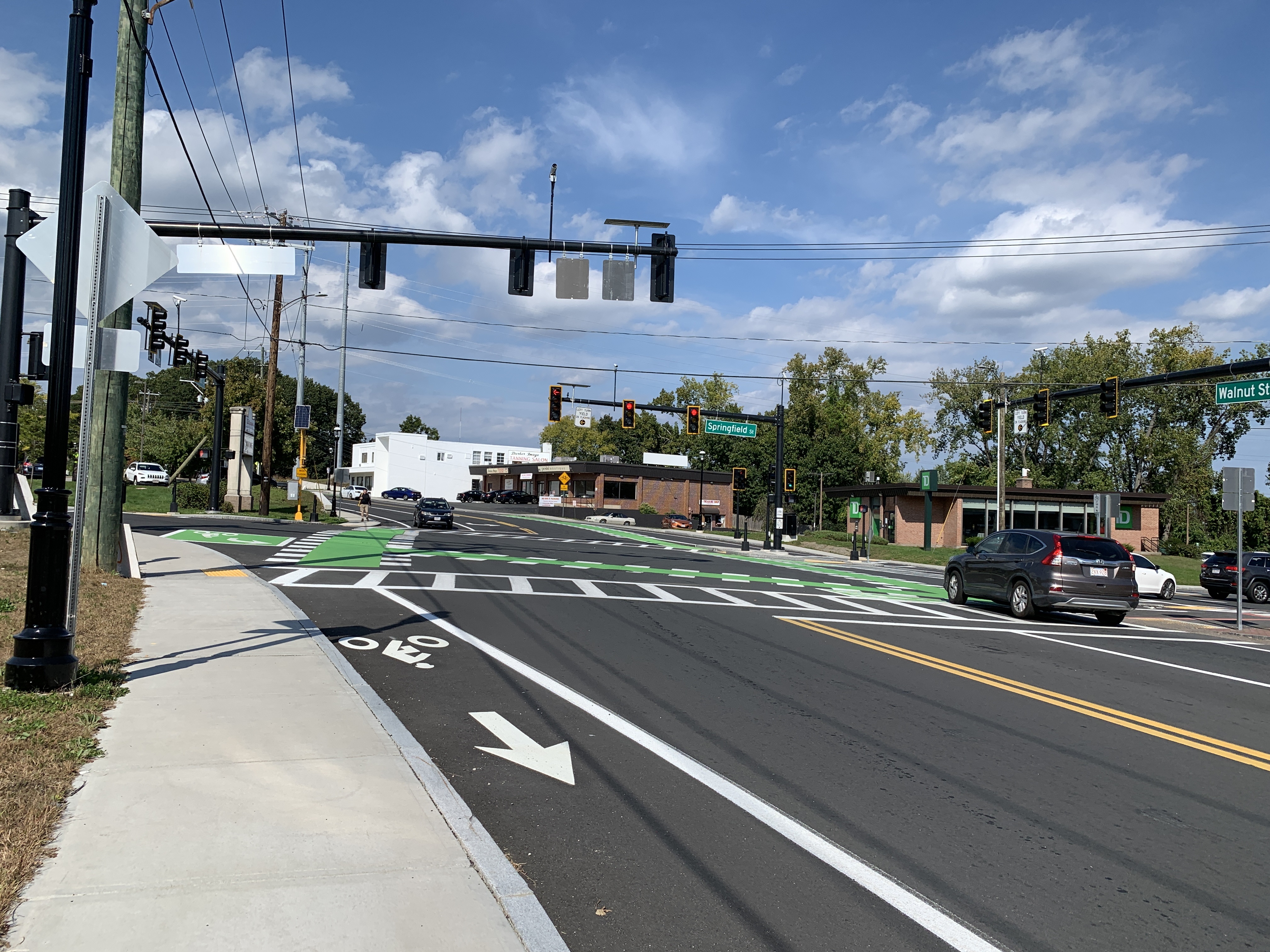 Implementation of bicycle crossings, two-stage turn boxes and bicycle signals
(Springfield St/Route 147 at Walnut St, Agawam shown)
Mentioned briefly earlier, West Springfield hosts The Big E fair every September. My husband and I traveled out to attend the fair in 2021, not long after this project was considered substantially complete. As an old habit, I still parked at the Roberta Doering Middle School on the Agawam side of the project, however this time there was no need to walk in the roadway on our way to the fair entrance! The wider sidewalks and bicycle facility provided plenty of width to allow safe passage to the fairgrounds. My husband even commented how much more inviting the area felt for pedestrians and bicyclists and less chaotic the vehicular movements seemed. Maybe all my shop talk over the years had finally worn off on him, however it was exciting none the less to have a non-engineer express a positive reaction to a project that I had worked so many hours on.
According to the Agawam Town Engineer, this project has created a ripple effect of additional projects in the area which further expands the complete streets network established as part of this project.
Closing Thoughts
This project was a success thanks to the collaboration between Benesch, the Municipalities, MassDOT, FHWA, our subconsultants and of course the residents and abutters of Agawam and West Springfield. We were thrilled and honored to receive a Silver Award for Engineering Excellence from ACEC/MA for this project and we look forward to implementing complete streets elements to other roadway corridors in the future.
For all of the structural engineers that made it this far, the bridge has not been forgotten! More to come on the complexities of the structural design of the Memorial Avenue bridge in a future issue of BSCESNews.