The Cochituate Rail Trail (CRT) project is a regional multi-use path that links the Village of Saxonville in Framingham to Downtown Natick, with a planned future connection to the Natick Center Massachusetts Bay Transportation Authority (MBTA) Commuter Rail Station. The CRT has been a long-standing vision of the Town of Natick, dating back to grassroots advocacy in the 1990’s and gaining momentum after freight service on the former CSX Saxonville Branch ended in 2006. As a regional corridor that connects to many businesses, transportation, institutional, and recreational facilities, the finished project is anticipated to be a catalyst for promoting mode shift in the region helping to reduce vehicle congestion, increase accessibility and safety, and promote alternative transportation accommodations for bicyclists and pedestrians. 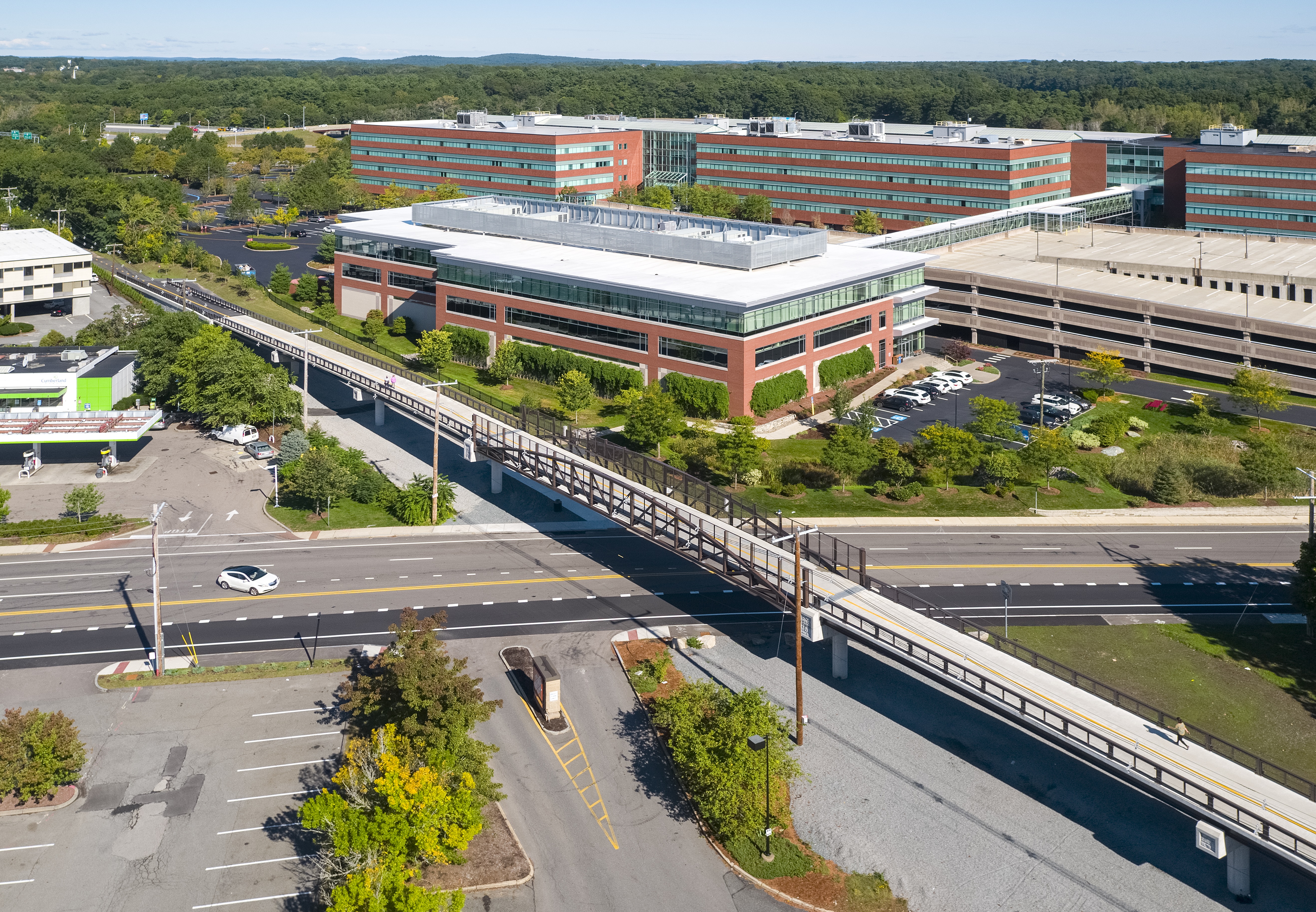 Cochituate State Park, which is a Department of Conservation & Recreation (DCR) facility, directly abuts the CRT. Therefore, DCR was a key partner in the planning process and has established a new park entrance from the Trail. The CRT also complements an extensive regional transportation network that includes Routes 9 and 30, the MBTA commuter rail, and the Metrowest Regional Transit Authority system.

The project was complex in many ways. For example, the erection of the prefabricated trusses over Route 9 and Route 30 required both roadways to be closed during the erection of the bridges. Neither of the heavily traveled roadway could be closed during the day, and night closures were strictly limited and defined. Further, the roadways could not be closed at the same time as they both required extensive detour routes. A detailed traffic detour plan was prepared for both the Route 9 and Route 30 closures. The detour plan was developed in close coordination with local and state police, as well as other emergency responders. Advanced notification was provided through a variety of media platforms. While challenging, the road closures and advanced planning prior to the bridge placements allowed for the work to advance with little delay.

Accelerated bridge techniques were utilized to minimize disruption to traffic on Route 30 and Route 9. Prefabricated steel truss bridges were used for both roadway crossings, with both bridges installed between approximately 11:00 PM and 1:00 AM. This minimized traffic impacts on Route 9 and Route 30 and allowed both Routes to be fully operational the following morning.

A special roundabout was designed for the multi-use path to promote both safety and visibility of the CRT/Wonder Bread Spur junction. Massachusetts Department of Transportation (MassDOT) and the Town supported the use of the roundabout as an innovative approach in managing the junction.

Joshua Ostroff, Chair of the Cochituate Rail Trail Advisory Committee, called the project “a milestone on our transformation as a region,” and recognized that “we are in a new age where thousands of people are looking for clean and healthy transportation and recreation opportunities.”

At the ribbon cutting ceremony, the Lt Gov. Karyn Polito emphasized the beauty of the Cochituate Rail Trail and sense of togetherness it brings to the community, while also looking towards the future of rail trail connectivity in the state, “There is more work to be done… we have a unique opportunity to allocate more dollars towards outdoor recreation and amenities.”

A community leader called this project a “social justice opportunity.” The CRT project promotes alternative transportation accommodations for bicyclists and pedestrians, which include some of the region’s most vulnerable users. The project is highly responsive to transportation equity by directly addressing bicyclist and pedestrian accommodation, connectivity, commuting needs, and improving overall access to the region for users of all ability levels. Utilizing a “Social, Economic, Sustainable Development, and Complete Streets” approach, a primary goal for the construction of the CRT was to provide a safe and reliable alternative transportation mode for people to get to work, shop, exercise, and access recreation without the use of cars, thereby reducing vehicle congestion and emissions.

In addition to creating a connection between the communities of Natick and Framingham, and providing additional recreational opportunities, the trail has given residents of both communities an attractive alternative to driving. With its proximity to major employers, retail centers, schools, and residential areas and with a future connection to the MBTA commuter rail station at Natick Center, residents can use the trail for both daily commuting and recreation. 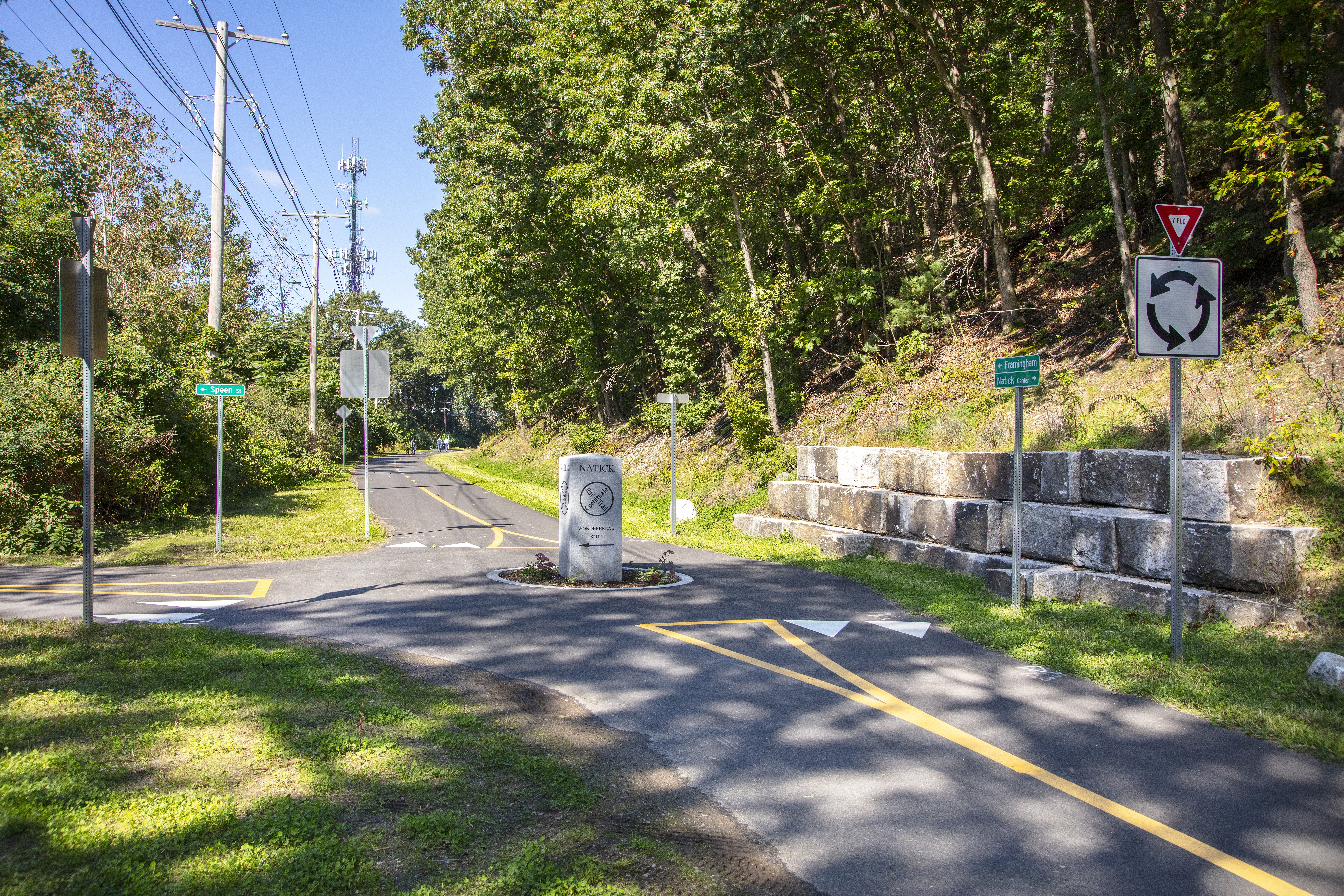 For both locals and general users alike, the trail’s thoughtful design enables access so they may appreciate the beauty of Lake Cochituate while reflecting on the history and evolution of the trail captured along the corridor by amenities including wayfinding and interpretive signage, which was designed in collaboration with the Natick Historical Society.  Overlook areas were incorporated into the design to promote views of Lake Cochituate and provide intermediate rest areas. The CRT passes over the historic Keystone Arch, which separates the north and middle ponds of Lake Cochituate. The design was sensitive to this historic feature and preserved it by designing mechanically stabilized earth (MSE) walls to support the CRT without impacting the arch. 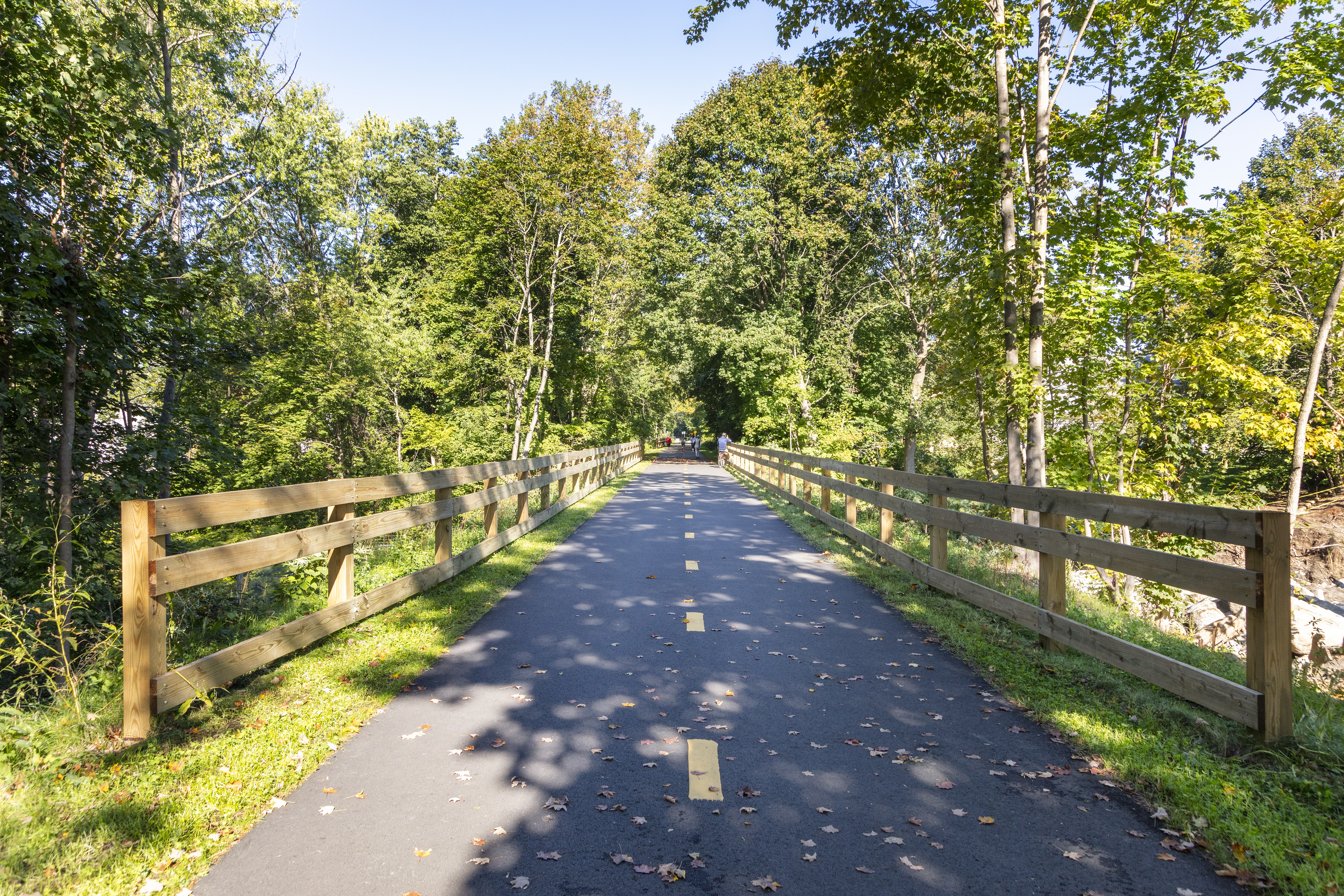