Introduction
In the spring of 2017, the Massachusetts Department of Transportation (MassDOT) – Highway Division partnered with HNTB Corporation to develop an ambitious project to continue its rehabilitation program for bridges across the Commonwealth. Faced with an aging inventory of transportation structures statewide, MassDOT proposed to tackle a long stretch of elevated viaduct structure through the heart of an urban area north of Boston in Chelsea, Massachusetts that had fallen into disrepair and was a major contributor of congestion and vehicle incidents due to structural deficiencies and safety concerns. The $170 million project was fully designed in only 18 months, and with substantial completion after just 30 months of construction, MassDOT’s Chelsea Viaduct replacement project serves to showcase both accelerated design and construction techniques, and how the team’s collaborative environment led to the successful removal of nearly 300,000 square feet of bridge deck area from the state’s deficient list.

Description and Scope
Limits of work for the Chelsea Viaduct project consisted of two separate viaduct sections carrying US 1 northbound and southbound from County Road Overpass to the Tobin Bridge, passing over several local roads and the Massachusetts Bay Transportation Authority (MBTA) commuter rail. The age and detailing from circa 1950s construction, coupled with a complex superelevated geometry over horizontally curved roadway sections, made for a challenging approach to accelerated rehabilitation and replacement design. Moreover, US 1 is a major artery to/from downtown Boston, and MassDOT mandated that impacts to traffic and roadway closures be minimized or avoided to the maximum extent practicable, and for designs to incorporate accelerated techniques to reduce overall construction duration on the heavily traveled corridor (63,000 average daily traffic (ADT)). In parallel with this design, MassDOT had also advanced an adjacent major project to repair and rehabilitate the Tobin Bridge carrying traffic at the southerly limits of the project in Chelsea over the Mystic River in and out of Boston. Both projects were thus tasked with additional design and construction coordination to ensure a consistent, accelerated schedule, as well as a uniform sequencing for efficient traffic management through the overlapping work zones.

HNTB and its subconsultant partners delivered planning and public outreach, civil, structural/geotechnical and highway engineering and traffic management to MassDOT, from preliminary project development and permitting through final design and procurement, and engineering support services during the project’s construction phase. The design included micropile underpinning/strengthening of existing foundations, concrete encasement of the existing steel columns and adding steel sister beams to supplement the existing steel bent caps, as well as the addition of new bridge units prefabricated with steel stringers and reinforced concrete deck for accelerated bridge replacement. 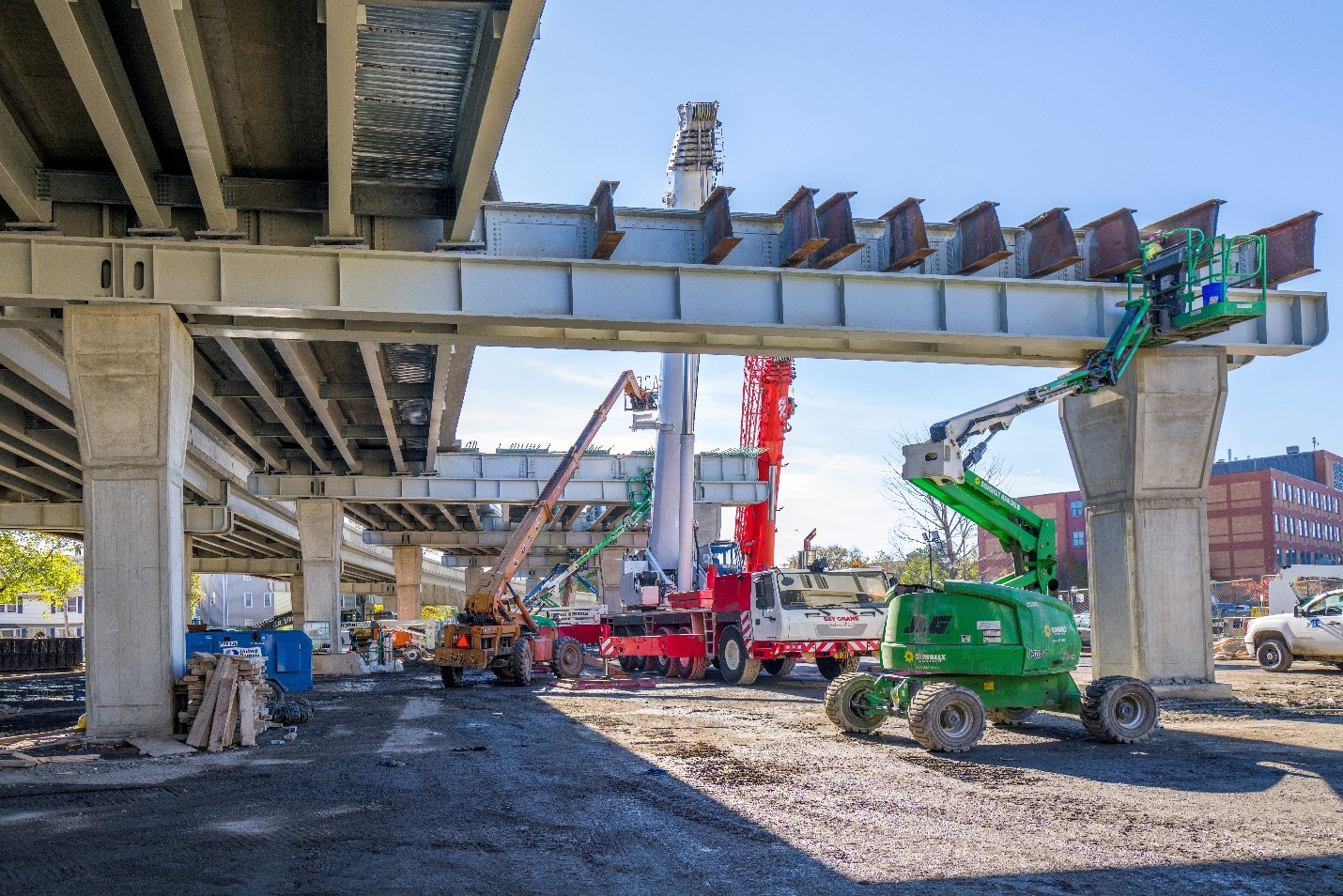 The viaduct from below, showing new structure (left)
and remaining demolition of existing stringer stubs (right).

Design and Construction Challenges
Throughout the project’s design development phase, a heavy focus was placed on structure rehabilitation options that could be advanced with limited or no impacts on the traveling public. HNTB worked closely with MassDOT and the City of Chelsea to develop clear lines of communication and a robust public outreach program to keep the surrounding neighborhoods and communities to the north of Boston regularly informed of coming construction impacts. The team worked to introduce several design options that accelerated the replacement of superstructure elements (using prefabricated bridge units (PBUs)) and also rehabilitated the multi-column steel bents over the length of the viaduct spans. Reinforced concrete columns and new corbel bridge seats were formed and cast around the existing, in-service steel bents, allowing for advance placement of bent cap sister beams and an expedited placement of PBUs immediately following incremental superstructure demolition.

One significant challenge encountered during design and construction was a need to resolve uncovered discrepancies in layout of the steel bents. Field survey efforts undertaken to support the design were subcontracted by HNTB and included limited ground survey information to pair with a LiDAR scan of the substructure elements. Scanning and post-processing of point-cloud data for a supplement to the ground verification survey was prepared and delivered to the project for incorporation in the contract documents.

Recognizing that geometric accuracy was critical to the ultimate success of the project, the contract documents retained traditional statements for the responsibility of the contractor to verify all field conditions, and were developed further to include additional requirements underscoring the need for the contractor to perform, prepare and submit their own field survey prior to development of fabrication shop drawings. Structural detailing was to be based on the field-located steel columns, cross-girders and related connections. 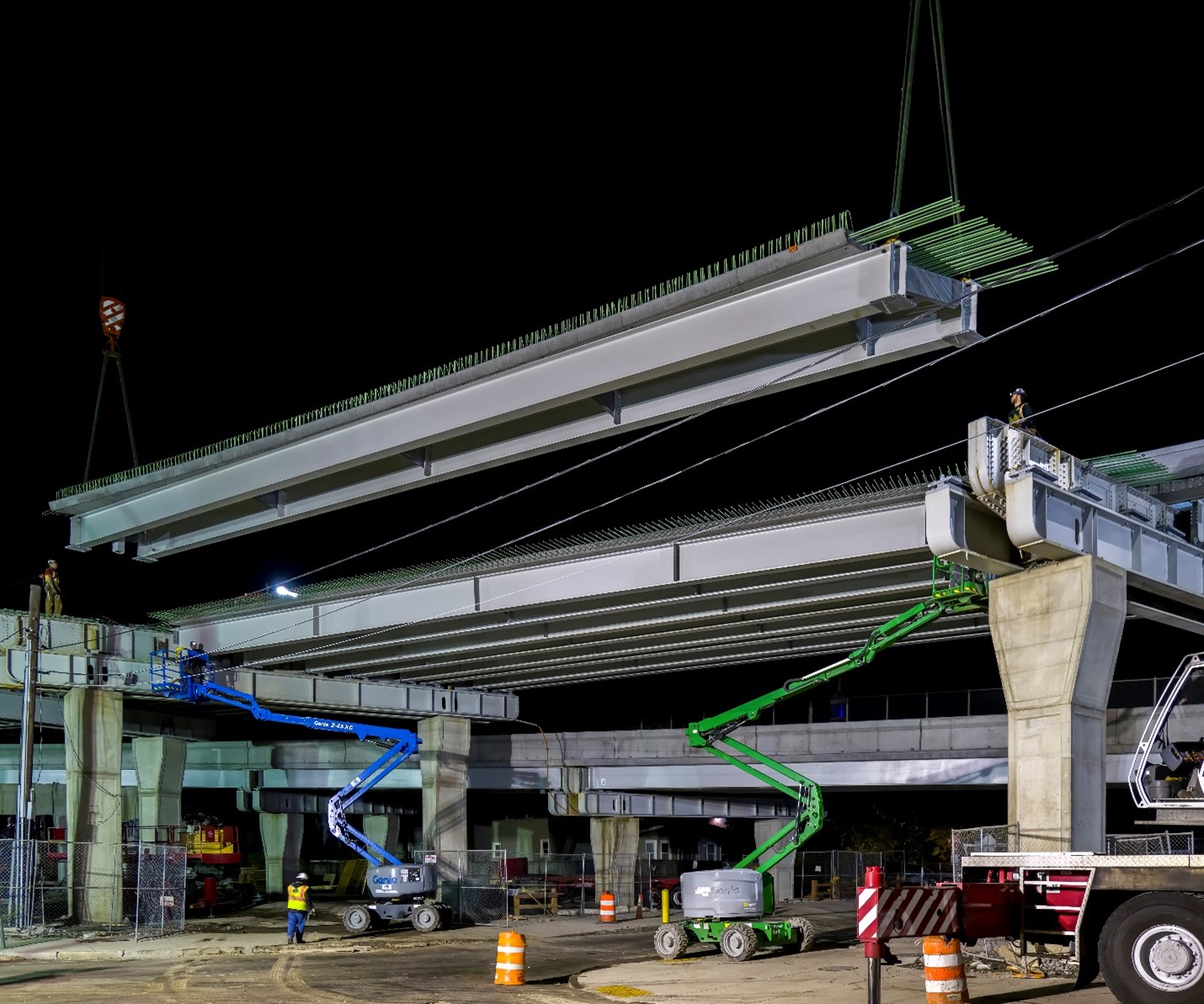 Results of the construction survey illustrated small, irregular differences in the locations and alignments of existing steel bents (columns and cap girders) throughout the project limits, as compared to the contract locations shown in the design plans. Plan discrepancies were largely variable, measuring up to 2.5 inches offset north and east of design locations. Bearing lines were also noted as slightly askew of design substructure alignments. Review and survey resolution were administered during weekly project meetings with the collective instruction to Skanska-McCourt, Joint Venture (SMJV) being to adhere to the contract intent and layout the geometry as found in the field, and re-detail sister beam and span geometry accordingly.

Based on the actual field located bents, it was found that many of the proposed sister beam to existing column connections were not aligned as illustrated by design documents due to the slight shift in the found structure layout. Alternate bracing options were discussed by the contractor and HNTB as potential solutions to the geometric conflicts with sister beam-to-existing bent connection plates. To verify the requisite sister beam lateral stability, HNTB reviewed the contractor proposed alternate channel bracing between adjacent beams, confirming by analysis that sufficient torsional restraint could be replaced in-kind.

Follow-up direction to the contractor, through MassDOT, was that masonry plates at sister beam bearings would require supplemental anchorage and corbel reinforcing to compensate for the change in brace location and load demand. However, the proposed alternate sister beam bracing concept provided clear benefits to the project and helped reduce risk of schedule delays by eliminating unique detailing and continued column connection fit-up challenges. 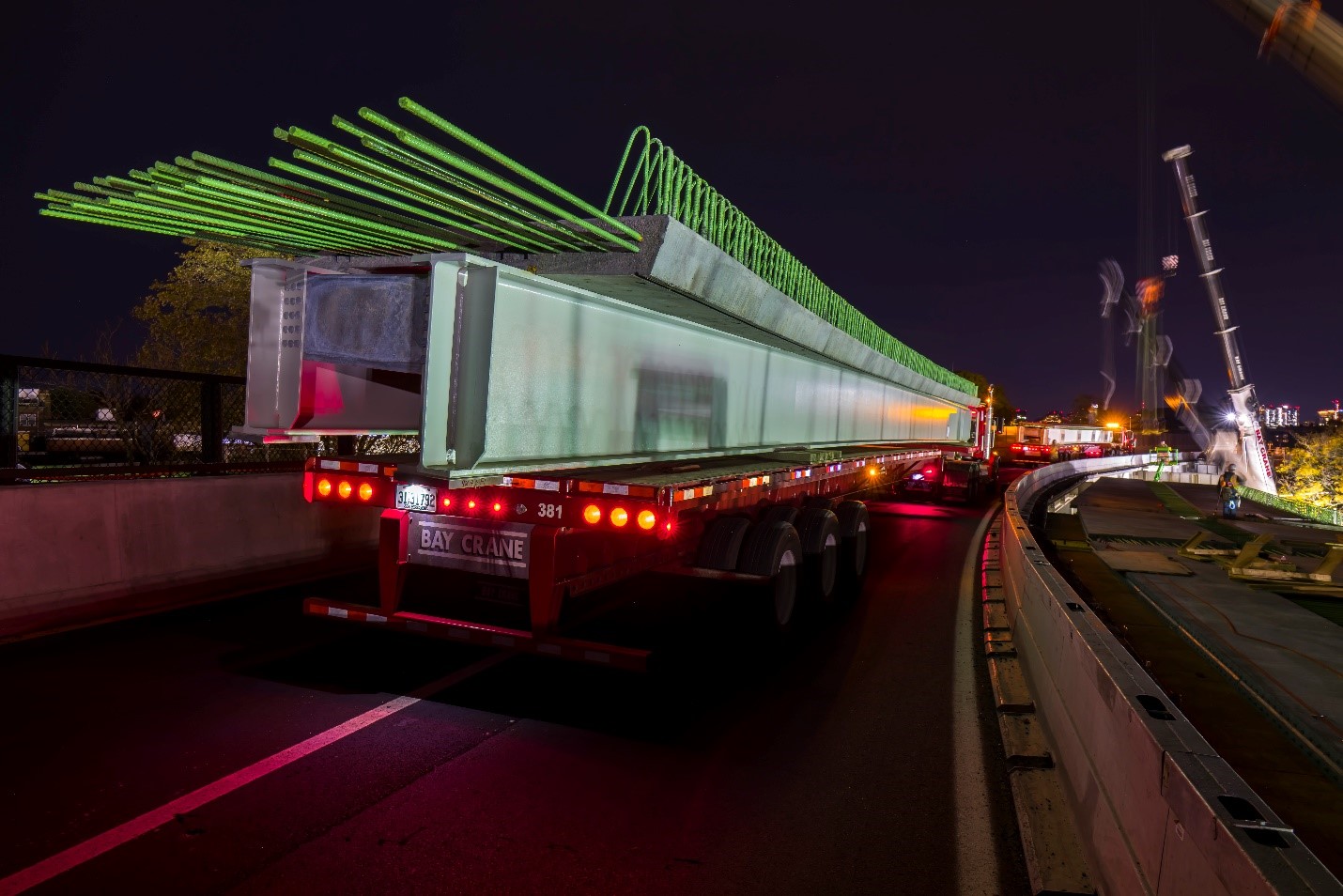 PBU transported on the viaduct to the location to be set.

Summary/Conclusion
Ultimately, the joint efforts and frequent communication by the contractor and HNTB worked well to identify field issues in real time as they arose during the bridge construction, while similarly the collaborative environment established and encouraged by MassDOT allowed for quick resolution and a successful, accelerated construction and project completion.