Catching the Bus to an Electric Future

Project Overview
Martha’s Vineyard, an island of about 100 square miles (250km2) off the coast of Massachusetts in the USA, presents a challenge for public transportation. Accessible by boat and air only, the island traditionally depended on imported fossil fuels for electricity and to power vehicles. This not only translates into higher fuel and energy costs, but also contributes to greenhouse gas emissions and noise pollution and leaves the island vulnerable to power outages during major weather events. The limited access also makes operating and maintaining a traditional diesel bus fleet challenging due to the complexity and number of components required in the vehicle drivetrains.

In 2018, Martha’s Vineyard Transit Authority (VTA) put in place ambitious plans to transition their fleet of 50 diesel-powered buses to an electric bus system. The VTA wanted to introduce a more reliable and environmentally responsible public transportation network that connects six towns on the island, the 20,000 permanent residents, and the island population that grows tenfold in the summertime. The transit authority’s priority was to provide a fleet to serve the island’s 15 routes and 1.2 million annual passenger journeys for years to come using reliable, emission-free and fuel-saving vehicles. In order to do this, they put the infrastructure in place to support and reflect this commitment.

However, the VTA went further than simply electrifying their transit system - they also added a microgrid, which allows on-site solar energy generation with battery storage to significantly reduce carbon emissions and energy costs. The microgrid provides a resilient, independent, zero-carbon energy source and enables the buses to be charged if the main grid goes offline, as occasionally happens. In addition to the microgrid, two in-route charging microgrid sites were designed to enable the electric buses to run throughout the day without the need to return to the depot for charging.

Arup provided electrical and site civil engineering to help the VTA electrify its transit fleet and fuel the feet with renewable energy and integrated energy storage. The project has resulted in a cleaner, more resilient and economic model for the Martha’s Vineyard transport system, with 16 of the 32-bus fleet currently electric - an additional four electric buses will be added in 2022.

When the all-electric bus fleet is fully in place it will eliminate 36,000 tonnes of carbon dioxide over ten years of driving 1.4 million miles (2.25 million km) annually. In the first first year of use, there was a $50,000 savings in fuel costs, with an expected $100,000 annual savings once the full system is in place.

Microgrid
When the VTA began transitioning to electric buses, the agency had to address the issue of how to reliably, sustainably, and cost-effectively keep the buses charged. Options included deploying diesel or natural gas generators for when the grid is not available or when electricity is at peak cost. However, using diesel generators to regularly charge bus batteries would defeat the VTA’s cost-savings and sustainability objectives. This led to their decision to develop a large onsite photovoltaic (PV) system at their bus depot to generate their own energy. 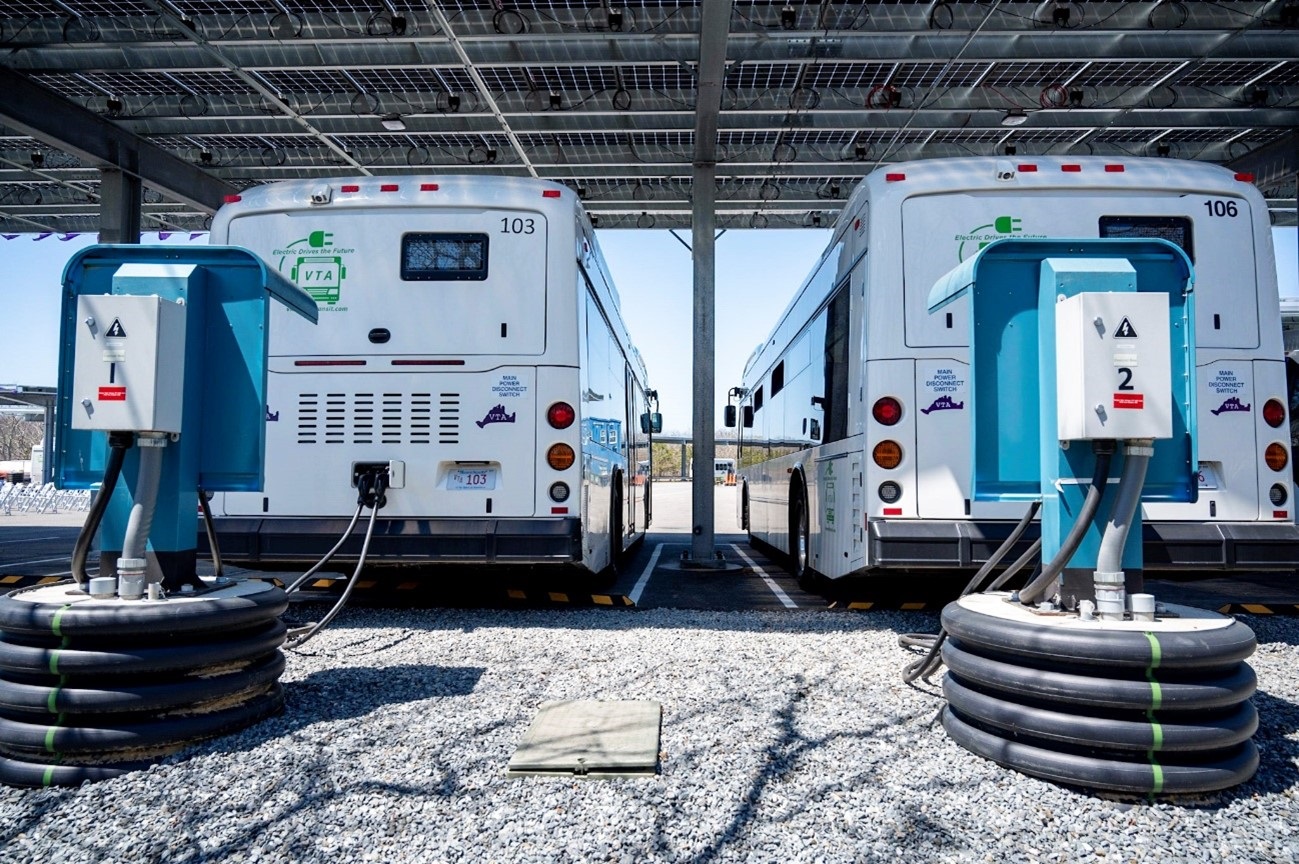 The solar array provides clean, renewable energy, at a lower price than if purchased from the utility, which also would have higher carbon content. The transit authority chose to pair battery storage with its solar energy system to manage utility costs and allow them to operate when the utility is down, thereby creating a microgrid. Surplus energy can also be sent to the grid which further offsets costs for the VTA.

This location was challenging due to limited space on site and the fact that the bus depot needed to remain fully operational during construction. Phasing of the works was also an important consideration, with construction taking place outside of the busy summer season. A challenge for electrifying bus fleets is the rapidly changing landscape of manufacturers, vendors, and products in the market, which was further exacerbated due to the COVID-19 pandemic supply chain interruptions. Arup coordinated the various manufacturers to ensure optimal interconnectivity and minimize construction disruptions due to equipment delays.

Induction charging
Two on-route induction charging stations have been designed to provide mid-day, top-up, charging – Church Street in Edgartown and West Tisbury Town Hall. Three induction chargers are now in use at Church Street. The induction station now enables the buses on a number of routes to recharge on route when passengers board and exit the vehicle at the charging location. This allows the buses to stay in service for their 200-300 miles a day circuit (320-480km) without detouring to be recharged or requiring replacement with fully charged buses from the 11A Street depot. Arup carried out the civil engineering design, including sewer line relocations in the public way and approvals to facilitate the installation of the wireless charging plates embedded in the ground at the bus stops.

Optimization
Along with operational cost savings and reduced carbon emissions, in comparison to diesel buses the electric fleet is quieter (both inside and outside), has no adverse impact on local air quality and typically requires less maintenance. Once a battery electric bus is on the road, its operation is much like a diesel bus, but when it returns to the depot, facility operations and recharging depart considerably from diesel procedures, upending many conventional transportation processes. Unlike a diesel vehicle that can be quickly fuelled, often conveniently drawing from large stores onsite, a battery electric bus requires a longer time to recharge. This is where the microgrid plays a crucial role in supporting fleet operations and costs.

Electric future
The installed system supports the transit authority’s requirements for reliable, regular transit while leveraging the microgrid’s smart technology for a new level of operational efficiency. As an electrified fleet, combined with a microgrid, the VTA’s new bus system presents a replicable framework for public transportation agencies nationwide and further afield, as transport providers look to transition to a cleaner, more resilient and economic future.