When planning new buildings to meet their net-zero energy and sustainability goals, Boston area schools and other municipal buildings are using geothermal technology along with other renewable energy sources to power their facilities.

Geothermal wellfield systems can be classified as open-loop or closed-loop systems. An open-loop system circulates groundwater for thermal exchange. Open-loop systems can be difficult to get permitted in most regions because they can impact groundwater quality. Because of these and other environmental concerns, the most commonly used geothermal wellfield system in the Boston area is a vertical closed-loop system. For a large wellfield, the ground loops installed within the wells are connected into circuits consisting of several wells in series, which meet at manifolds in vaults, which then connect to heat pumps inside the building.

Designing a geothermal heat pump system requires determining the thermal properties of the ground, including the thermal conductivity, thermal diffusivity, and ground temperature. The design also considers the heat pump operating characteristics, estimates of annual and peak block loads of the buildings or applications, and the ground loop and grouting material properties.

Geothermal wellfield design is an iterative process that requires close coordination with the designs of the building’s HVAC, energy model, and utility and landscape components of the project. The wellfield must be properly sized to meet both short-term and long-term performance requirements and be properly laid out to accommodate project constraints and avoid utility conflicts. During wellfield installation and system testing, quality control and oversight must be implemented to ensure proper construction and facilitate modifications during construction that are common because of various drilling and installation difficulties.

The new King Open and Cambridge Street Upper Schools and Community Complex in Cambridge, Massachusetts was designed as the first net-zero emissions school in Massachusetts to support the City of Cambridge’s civic, sustainability, and net-zero visions. With this aggressive target, various energy-saving and sustainable strategies were incorporated into the design, including a geothermal heat pump system for building heating and cooling.

CDM Smith partnered with the City of Cambridge to conduct a test well program and design a geothermal wellfield system, consisting of 190 closed-loop U-bend wells, each at 500 feet deep. This geothermal wellfield system supplies all heating, cooling, and domestic hot water needs for the building. In addition to the geothermal design, the team provided construction oversight and administrative services for the wellfield installation, system testing, and post-construction commissioning.

The new school opened in August 2019 as planned with successful project completion. 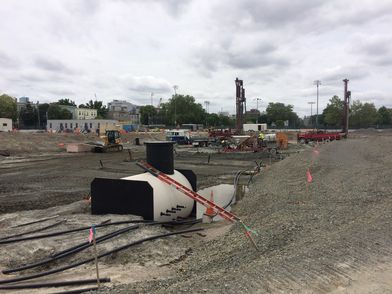 The Belmont Middle and High School project in Belmont, Massachusetts involved the construction of a new four-story school building for grades 7 through 12 (approximately 445,100 square feet) along with several athletic fields and site improvements. To help attain a net-zero emissions building for sustainability, a geothermal system was proposed for all heating and cooling of the new building plus domestic hot water and indoor pool heating. CDM Smith, in association with Perkins & Will, provided engineering services to support the design and construction of the geothermal system for the project.

A test well program consisting of three test wells was conducted at the project site to obtain ground thermal properties and additional information on wellfield construction. The design of the wellfield system consisted of 280 closed-loop U-bend geothermal wells, each to a depth of 500 feet.

One of the challenges the team faced during the wellfield construction was wastewater management. The project has a high standard for discharge of wastewater. As the site is relatively impermeable, the combination of the groundwater produced from well drilling and rain made it difficult to keep the site dry without sacrificing production rate. Extensive effort was made to manage the wastewater at the site, including using two large volume weir tanks and water chemical treatment to improve the water quality before discharging to storm drains. 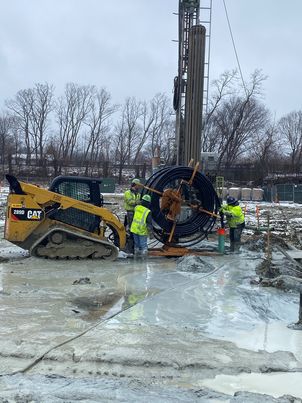 The wellfield construction started in February 2020 and was completed in August 2020 as scheduled , even during the pandemic. The school building construction is currently on-going.

Geothermal heat pump systems are one of the most efficient and sustainable energy systems and offer benefits including life-cycle cost savings, low maintenance, year-round comfort, and quiet operation. Geothermal heat pump systems are becoming a long-term energy solution for new schools, municipal buildings, and commercial buildings. The implementation of these systems will likely expand as experience is gained and agencies become comfortable using the technology.

The authors would like to acknowledge the City of Cambridge on the King Open project and the Town of Belmont on the Belmont Middle and High School project for the opportunity to present the two projects in this article.