The following article is based on article entitled “Bent on Innovation”, which was previously published in Modern Steel Construction magazine (2021, February). That article was authored by Michael P. Culmo, PE, chief bridge engineer at CHA, Ronnie Medlock, PE, vice president at High Steel, and Timothy Fields, PE, state bridge engineer at the Connecticut Department of Transportation.

Modern highway interchanges often require complex bridge geometry to safely divert traffic from one roadway to another. This is especially true for interchanges where two limited access highways converge. These interchanges often have ramp configurations with higher travel speeds, resulting in flatter curves and braided geometry. Braided ramp geometry leads to the need for straddle bent caps where one ramp crosses over another roadway at a severe skew angle.

The I-91 Interchange 29 in Hartford, Connecticut, is an example of a high-speed highway interchange. The original interchange, built in 1990, connects Interstate 91 with Connecticut Route 5/15, which acts as a connector highway to Interstate 84 eastbound. The key feature in the interchange revolves around the connection between Interstate 91 northbound and Route 5/15 northbound. The original interchange ramp was a steep, narrow single-lane with a traffic weave where the ramp meets Route 5/15. The new ramp is a two-lane high-speed ramp with greatly improved geometry and a flatter grade; however, it crosses Route 5/15 southbound at a severe skew in a braided configuration.

The design team investigated several ramp structure options, including tunnel-like configurations and long-span bridge options. Figure 1 depicts the crossing of these two roadways and the area in which vertical clearance was required between the two roadways. Cantilever post-tensioned concrete hammerhead bents were used in the final design, where there was ample vertical clearance for traffic to travel under the bent caps. A single straddle bent was used where the two roadways converge. The spans supported by the straddle bent cap are 215 ft on either side of the straddle bent.

Figure 1. A plan view of Interchange 29.

The design of the Interchange ramp bridge straddle bent was based on providing load path redundancy. The concept was to design a cap with three I-girders bolted together with diaphragms, essentially providing a multi-girder bridge supporting another bridge. Figure 2 shows the details of the cross-section of the straddle bent. The concept for the design was multifaceted, with load path redundancy being the primary reason. The idea was that the fracture of one flange would not lead to the collapse of the entire straddle cap. The second reason was to facilitate shipping and erection. The straddle beam could be shipped and erected in one piece, two pieces, or even three pieces—providing flexibility to the contractor and erector. If a large crane was available on-site, it could be erected as one complete girder. If crane sizes were limited, the cap could be erected in three pieces. 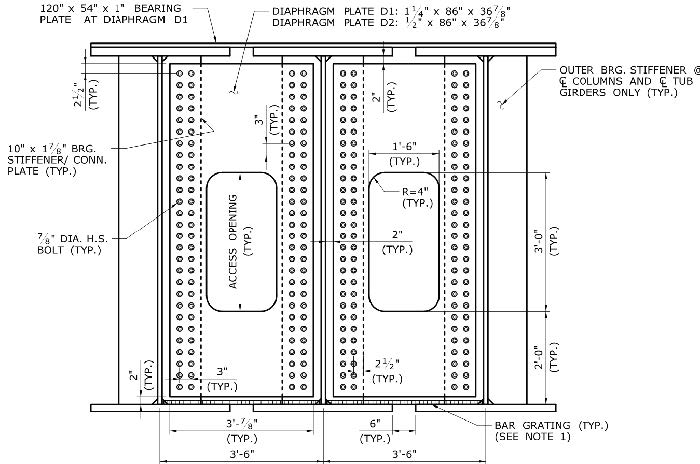 Figure 2. A typical cross section of the straddle bent.

The spacing of the beams was set to provide ample access for future inspections and maintenance. The area between the beams is approximately 90 in. by 42 in. A small gap was detailed between the flanges to allow for airflow to keep the girders dry, and standard steel grating was placed on top of the bottom flanges to prevent maintenance tools from falling to the roadway below. Sealing plates were used on the top to prevent the ingress of water and snow, and access hole sizes and elevations were set to facilitate inspection and repairs. The overall bridge is made with uncoated weathering steel; however, the interior portions of the straddle bent were coated out of concerns with potential dampness.

One might question the efficiency of the three-beam design when compared to a closed box girder design. The reality is that the area of flange steel is slightly less than an equivalent box section. The third web provides added flexural resistance, thereby leading to a small reduction in the flange area. The addition of a third web does result in a small increase in the steel area for shear, but the cost differential is minor. The design team’s thinking was that even if the straddle beam was slightly more expensive than an equivalent box section, the benefit of load path redundancy and the elimination of a fracture- critical designation were worth the potential increase in cost. 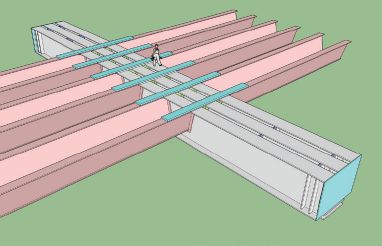 Figure 3. A concept for an integral three-girder cap.

The design team investigated two options for the detailing of the straddle bent. The first option was where the beam was integral (framed into) the steel superstructure. The other was to have the continuous steel girders be supported on top of the straddle beam. Figure 3 shows the integral option that was studied. This option proved to be feasible, though the detailing and estimated cost for fabrication were considered to be higher than the non-integral option.

There was sufficient vertical clearance at the straddle bent location to allow the bent cap to be placed under the continuous steel trapezoidal box girder superstructure in a stacked configuration, which greatly simplified the detailing of the straddle bent and the superstructure girders Figure 4 depicts the stacked configuration. The integral framed design offers the benefits of increased vertical clearance. However, the detailing can get quite complicated, and costs would be higher. In order to provide stability of the three-beam cap, multiple bearings were used at each end to provide lateral restraint to the minor torsional forces in the system. The supported beams above were connected to the bent cap beam with a single bearing at the middle beam in the bent cap. 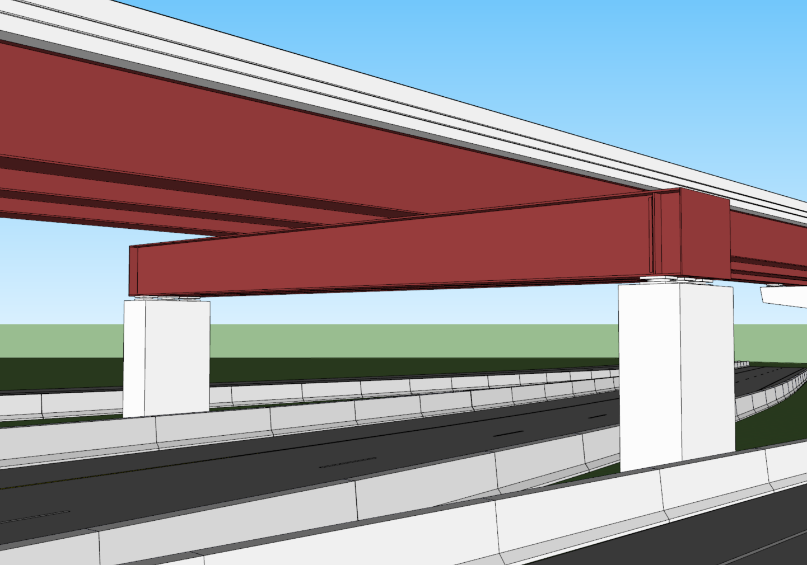 A 3D analysis was developed that modeled the internal diaphragms and the stiffness of the superstructure to ensure that the three beams would work together to provide the required resistance. Figure 5 shows the FEA results for the diaphragms showing the stress distribution, with the stress contours indicating that the internal plate diaphragms can successfully distribute forces to all three girders.

Fabrication
High Steel Structures, LLC (High Steel) fabricated the bent cap and found it both relatively easy to fabricate and, given the ease of fabrication, cost-effective compared to traditional bent cap boxes. High Steel estimates that three-girder caps can be as much as 50 percent less costly when compared to the cost of traditional boxes. This is due to the fabrication complexity of box girders, especially integral box girders as shown in Figure 6. By comparison, fabrication of I-girders is commonplace and efficient. 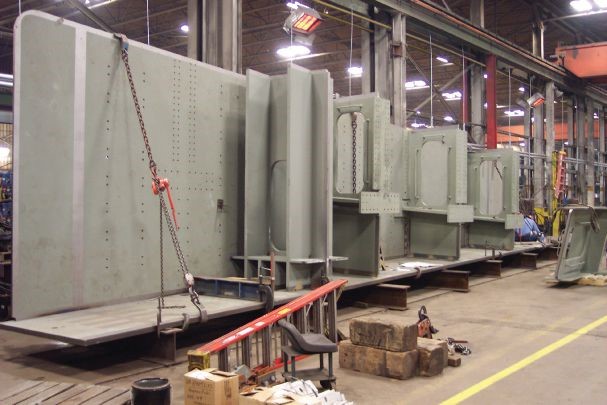 Box girders are usually painted on the inside, primarily to help facilitate in-service inspection. To help reduce work inside the box, webs and flanges are precleaned, masked, and painted before the box is built, and then any needed touch-up painting is performed after the box is built. Other tasks are also particularly challenging to accomplish inside of boxes, especially welding, which requires dragging welding guns and leads through boxes and heightened ventilation to removed welding fumes. Complicating the traditional box building process, box web-to-flange corners often have complete joint penetration (CJP) welds, whereas I-girder webs and flanges are joined with fillet welds. The CJP welds require more steps to make, as compared in Table 1.

The greatest savings in the three I-girder caps are in the fabrication operations. With traditional boxes, it takes considerable effort to join all four sides so that the webs and flanges are properly fit to each other and to the internal diaphragms and other internal elements. As shown in Figure 6, fabricators typically assemble one web to one flange, add the diaphragms, add the second web, and then finally add the second flange to close the box, adjusting elements using heat along the way to help achieve fit. These steps take considerable time and effort. By contrast, the three I-girder webs and flanges are joined using typical I-girder fabrication, which is much simpler. 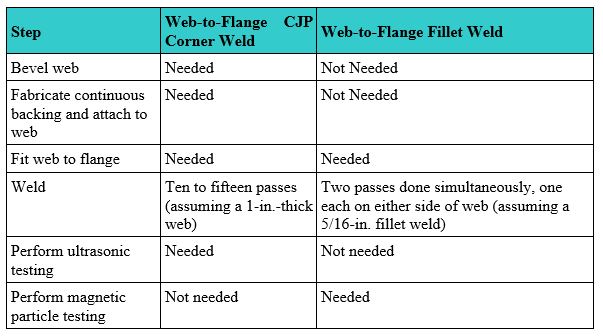 Figure 7. A model view of a diaphragm-to-girder assembly

An older method of making holes is to assemble the parts to be joined and then drill the holes with the parts together, either drilling one time through blank steel in both parts or starting with sub-size holes in the individual parts and then reaming the holes to final size with the parts together. These methods are still useful in fabrication, but today’s CNC equipment, shown in Figure 8, is much more productive for many applications.  This equipment plays a part in making the three-girder straddle cap economical. Using CNC equipment like the plate processor, the three-girder cap connections were made with this workflow: 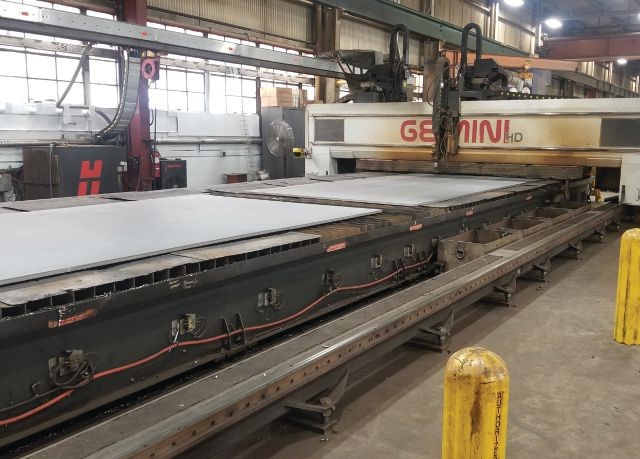 In addition to the cost and time savings associated with the three-girder cap, there is also a safety advantage in its fabrication. Boxes are confined spaces and thereby pose a safety risk. Fabricators effectively manage this risk by being prepared for the eventuality that a coworker has a health emergency while inside the box, but it is preferable to avoid the risk entirely. 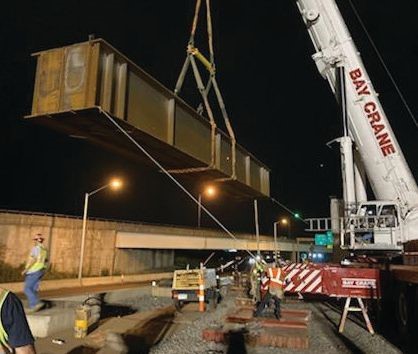 Figure 9. Erection of the cap

The construction of the bridge progressed smoothly. Two of the three girders were shipped assembled, and the third girder was shipped separately and then attached in the field prior to erection. The entire straddle cap assembly was then erected in one piece during a short overnight road closure, as shown in Figure 9. The erection of the superstructure trapezoidal girders followed shortly after that.

The construction of the bridge is complete, and it is open to traffic, as shown in Figure 10. The use of the triple I-Girder straddle cap has proven to be a successful design. The design is cost-effective, provides load path redundancy, and facilitates the shipping and erection process. This concept is flexible and can be applied to all typical steel straddle bent designs, including integral bents. It can also be applied to steel hammer head bent caps.  Elimination of a fracture-critical designation will save the owner costs over the long-term due to the elimination of fracture critical member inspections.