The Committee on Sustainability selected the Massachusetts Water Resources Authority (MWRA) this year to receive a BSCES Sustainability in Civil Engineering Award for the Wachusett Aqueduct Pumping Station, which was completed and put into operation in 2019.  This is the fifth year that BSCES has solicited nominations and selected esteemed recipients.

The Wachusett Aqueduct Pumping Station is a critical component of the MWRA’s water transmission redundancy plan. The MWRA operates the Carroll Water Treatment Plant (CWTP) as the sole water treatment plant for member communities within Metropolitan Boston. Prior to completion of this project, a single tunnel connected the Wachusett Reservoir to the CWTP. With the completion of the project, two individual tunnels can supply water to the CWTP. This meets the Authority’s goal of providing critical redundancy within their water system to maintain drinking water and fire protection standards for member communities. This redundancy was addressed in MWRA planning documents and provides infrastructure resiliency for Metropolitan Boston by helping to ensure a continuous potable water supply. 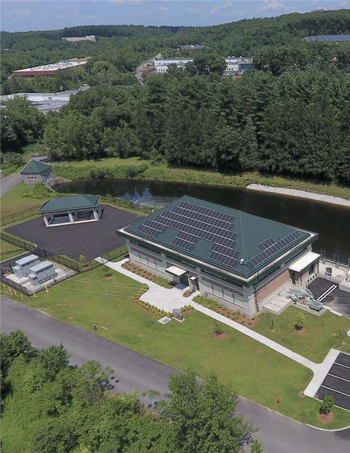 The MWRA included sustainable design aspects in their proposals for consultants for the design of this pumping station. During the design, the project team realized there was additional potential for this project to meet higher sustainability goals. The MWRA recognized their position within the Commonwealth as an innovator within the water and wastewater fields and decided to investigate Net-Zero Energy goals for the building, including its pumping operations. The Net-Zero Energy process first optimizes energy efficiencies within the building, then calculates energy usages within a given year and finally offsets the calculated energy with renewable energy sources.

The project team embraced the Net-Zero Energy goal, and the design progressed with several sustainable upgrades. The building envelope insulation was increased above minimum code requirements and subgrade insulation was incorporated. A cold roof was also added to the project to minimize energy transfer from the sun and outside air into the building. Other improvements included a hard ceiling in the main pump room to reduce the volume of air to be conditioned. The choice of the building’s heating and cooling system was a large focus of the Net-Zero Energy team. The team ultimately settled on a geothermal heating and cooling system. Instead of a system that uses groundwater wells for a heat source and heat sink, this design utilized the adjacent forebay for this purpose. The geothermal system circulates forebay water into the building, where it interacts with a heat exchanger that is connected to a water-cooled heat pump. The heat-pump enclosure provides both heating and cooling to the building, which reduces the amount of equipment required within the structure. Water-cooled heat pumps are also more efficient than air-cooled chillers and therefore use less energy. The system also allows for the heat pump to be bypassed to provide free cooling when the water is cold enough in the forebay channel.

Lights within the building are motion sensor enabled and connected to daylight sensors to vary the intensity of the light based upon available sunlight. All of the lights used on the project are energy efficient LEDs. There is limited water usage within the building, but water fixtures were selected to be low-flow models. The landscaping was selected to be drought resistant and not require irrigation, and the pavement on the site is porous to help recharge the local groundwater.

The onsite generation of renewable energy was done through solar panels. The original design included enough panels to offset the standby mode of the station, with some excess energy produced to offset part of the monthly pump operations.  During construction, an opportunity presented itself in the form of higher efficiency solar panels. Increases in solar efficiency between design and construction were identified by the solar vendor that would result in generating additional power on site with the same planned square footage of solar panels. The finished project was able to produce more energy than originally designed. This additional energy covers all the energy required for operation of the station in standby mode and the monthly exercising of equipment. The solar panels are directly connected to the pumping station’s electrical system, and any additional power not consumed within the station is fed back to the CWTP campus to offset other electrical loads within the plant.  The project includes electrical meters on the solar panels and on building systems to facilitate monitoring to ensure the project is meeting its proposed energy goals.

The project was built to interface within the existing campus and adjacent conservation land. The building aesthetics were selected to match features of the adjacent treatment plant for consistency. The aesthetics were also chosen to highlight the building as a high-value feature for the MWRA. The building incorporates windows for natural lighting inside, and there are multiple precast concrete features on the exterior of the building to break up the appearance of plain bricks. The adjacent surge structure was also stylized to match the building itself with similar precast concrete elements and metal roofing. An historical stone building at the project site was partially rehabilitated during construction to address required repairs to the roof of that building.

The construction requirements also incorporated sustainable practices. The contract documents included requirements to sort construction wastes. During construction, metal, wood and concrete were separated from the general waste streams. For footings and specialized pipe beddings, the contractor used engineered materials in specific locations as required, but most of the backfilling was done with materials that had been excavated on the site. Additional material not used for backfilling was placed in an existing designated fill area. This additional fill was placed in accordance with an engineered plan to minimize runoff potential and re-establish meadow growth that was in place previously.

The pumping station is for emergency service and to allow maintenance of the existing water tunnel system. Under non-emergency situations, the station will not be required to pump water into the treatment plant. The sustainable aspects of the project and the Net-Zero Energy pursuits allow the pumping station to sustain itself in non-emergency situations. Additional power will be required to facilitate yearly training.

The project provides critical redundancy to a large population without using net power within a given year to stay ready. This conserves both energy and money related to energy costs. At the same time, all building systems and pumps are ready to provide continuous drinking water to the 3.1 million people within the service area. The station was tested at full flow during construction to ensure that all the critical equipment functions properly. This is a large pumping station for a large population. It is an excellent demonstration to other communities that sustainable aspects and Net-Zero Energy goals can be accomplished on large projects, which can easily be scaled down for smaller projects.

The following project team members delivered this project to the MWRA:

Stakeholders involved in the design and construction process:

About the BSCES Sustainability in Civil Engineering Award

The BSCES Sustainability in Civil Engineering Award recognizes projects with a Massachusetts-based team leading design of a civil engineering project constructed within the last three years that exemplifies the principles of sustainability espoused by the Institute of Sustainable Infrastructure (ISI). Submission guidelines and evaluation criteria will be published in future newsletters and the BSCES website online.