As global sea levels continue to rise, severely damaging floods will shift from a rare occurrence to a monthly reality.1 According to Climate Ready Boston findings, this means that between 10 and 20 percent of Charlestown, East Boston, Downtown, and South Boston will face high-tide flooding by mid-century, even when there is no storm. In planning for the rising tide and storm surge effects on coastal infrastructure, the Massachusetts Water Resources Authority (MWRA) has closely followed the evolving science of climate change over the past few years with the goal of fully understanding potential impacts to facilities and operations. MWRA has taken a pragmatic approach to climate change adaptation, and efforts have largely focused on the evaluation and implementation of measures to allow MWRA facilities to withstand a significant storm event that could occur in Eastern Massachusetts. Primary concerns for approaching sea level rise include the following:

Following Super Storm Sandy in October 2012, MWRA began an evaluation of coastal facilities to understand each one’s ability to withstand such a storm were it to make landfall in the Boston area. The most current information available on climate change scenarios and sea level rise has been and will continue to be incorporated into design and construction contracts to ensure hardening against potential impacts.

MWRA recognizes that mitigation solutions must be approached as an ongoing effort. While there is no singular solution to a constantly changing issue, MWRA has formulated both short- and long-term strategies that address flooding concerns with the overall goal to limit damage, recover fully, and resume activity as quickly and efficiently as possible. Various adaptation strategies have been formulated on the basis of a newly adopted benchmark of 2.5 feet, added to the current 100-year flood elevation as set by the Federal Emergency Management Agency (FEMA) to account for sea level rise and intensified storm surges. This benchmark by no means depicts the “perfect” numerical value in planning for mitigation strategies. It does, however, represent a reasonable estimation of change for staff to utilize in evaluating the potential threat of sea level rise on coastal facilities. As research in climate change continues to advance, MWRA is aware of the potential for new scientific information to warrant reevaluations of existing benchmarks and plans to act on these analyses accordingly.

While both short- and long-term strategies are imperative in developing emergency preparedness efforts, MWRA has placed particular emphasis on high-priority immediate actions to take in response to a severe weather event. Where major work is not occurring in the short-term, MWRA has identified immediate needs for flood-proofing improvements (such as raising equipment up off of floors and installing stop logs at doorways). Mapping out emergency response plans, training and drilling staff on those actions, and evaluating MWRA’s response after each major event have all been crucial initiatives in striving for preparedness.

Long-term initiatives include upgrading facilities on individualized rotation schedules and adding flood mitigation measures. Storm surge, together with anticipated sea level rise resulting from the changing climate, will affect a number of MWRA and communities’ coastal collection systems and wastewater facilities. As climate change projections evolve, anticipated infrastructure impacts and identification of appropriate projects to counter negative impacts will become more critical themes of future MWRA Master Plans. MWRA’s 2018 Master Plan assumes any significant flood mitigation efforts will be undertaken as each MWRA facility is rehabilitated or upgraded, and that simpler measures will be implemented as maintenance efforts. Rehabilitation projects at the Alewife Brook Pumping Station and the Chelsea Creek Headworks have already incorporated anticipated changes in sea level into the design criteria, and other coastal facilities have had flood mitigation measures implemented. Future coastal projects may need to be targeted so that increases in tidal and storm surge inflow do not impact MWRA’s ability to provide reliable wastewater collection and treatment.

To determine site vulnerabilities, MWRA evaluated the potential impacts of sea level rise on 30 coastal or near coastal wastewater and administrative/operational facilities – of which 13 were determined to be within the most recent FEMA 100-year flood elevation (or, to be conservative, within one foot above the 100-year elevation). The record drawings for all MWRA coastal facilities were reviewed in order to identify their lowest flooding elevations. In many cases, this was the first-floor elevation. However, lowest flooding elevations could also include hatches or other access points on the exterior of the facility. Staff performed site-specific inspections of each facility and took note of any major exterior equipment (such as emergency power generators) that might be damaged during a major storm. Using specialized software, staff then performed an inundation analysis that used the three-dimensional elevation data that was recently collected by the Commonwealth through Light Detection and Ranging (LiDAR). These data are approximately ten times more accurate than the old data that were based on the two-dimensional topographical maps.

The second benchmark is the 100-year flooding elevation with an additional 2.5 feet added. Some regional organizations, such as Boston Harbor Now and the NYC Department of Environmental Protection, have adopted this benchmark as a reasonable and conservative estimate of mid-term sea level rise. These benchmarks can be seen on the photo of the Quincy Pump Station below. Climate models have varying estimates for the degree of rise anticipated by 2050 or 2100, and 2.5 feet generally falls in the middle of them. When compared to the recent Boston Research Advisory Group (BRAG) sea level rise projections, 2.5 feet appears to provide protection beyond 2070 - even for the highest C02 emissions scenarios. MWRA is using this benchmark as an appropriately conservative measure of vulnerability, addressing issues of both storm intensity and sea level rise. MWRA will also continue to monitor the evolving science and consensus on sea level rise and change benchmarks as appropriate. 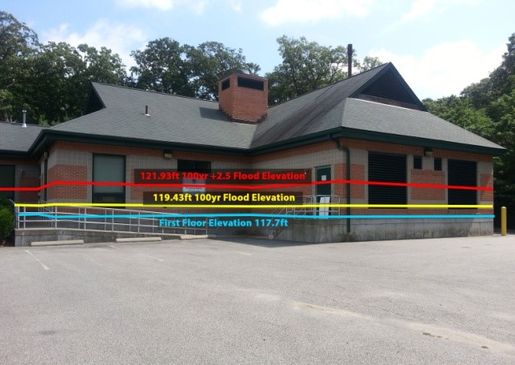 In addition to these two specific benchmarks, MWRA also reviewed the storm surge created by hurricanes as modeled by the Sea, Lake and Overland Surge from Hurricanes (SLOSH) model that is run by the National Weather Service, and wave action elevations from FEMA for near coastal facilities adjacent to FEMA Zone VE.

Despite these vulnerabilities, evaluations of the impact of climate change on the water supply system indicate that the design and inland location of MWRA’s source reservoirs, Quabbin and Wachusett, should not be adversely affected. Safe yield will likely increase slightly, while many neighboring communities will see reductions in reliability due to more variable future precipitation patterns. MWRA will also be able to provide both emergency and regular supply to more surrounding communities in the future. 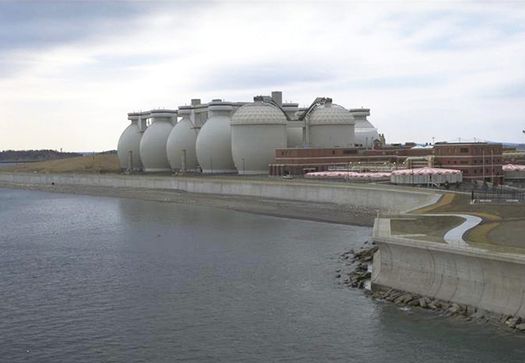 Deer Island Treatment Plant fully protected by design for 100 year flood,
1.9 foot sea level rise, and wave run-up of 14 feet on its east side and
2 feet on its west side. An on-site power plant also
ensures uninterrupted power supply.

Additionally, the Deer Island Treatment Plant was designed with a 100-year storm event in mind. Even with the newer FEMA maps, Deer Island operations will not be impacted by sea level rise flooding. During design, plant process tanks were raised almost two feet, and the outfall was increased from 24 to 24.5 feet in diameter to accommodate sea level rise without reducing the plant capacity. In addition, the island is surrounded by a seawall that reflects incoming wave energy back to the ocean.

Resiliency describes an entity’s ability to be prepared for disruptive events, recover within a reasonable timeframe with minimal damage, and resume normalcy as quickly and smoothly as possible. MWRA’s climate change resiliency program aims to make resilience principles, planning, and implementation an integrated aspect of business strategy and operations, along with facilitating cooperation among key internal and external stakeholders to increase mutual security. To this end, MWRA will continue to model resiliency to both heighten collective preparedness and influence regional discourse in the face of climate change and sea level rise.