While the subject of this month’s edition of Historic New England Infrastructure is a result of our natural world and not a manmade engineered structure, the story of the City of Boston’s first water supply, the Great Spring, is an important chapter in the early history of our City. The Great Spring served as the first and primary water supply source for the city for almost 200 years. Today, a small plaque commemorating this important site can be found on present day Spring Lane, a narrow alley running between Washington and Devonshire Street and parallel to Water Street (see Figure 1). The plaque is mounted on the back of the Winthrop Building, which also has historical significance as being the first skyscraper constructed in the city utilizing steel framing. The plaque, set by the Bostonian Society in 1907, reads, “Here was the Great Spring which for more than two centuries gave water to the people of Boston.” 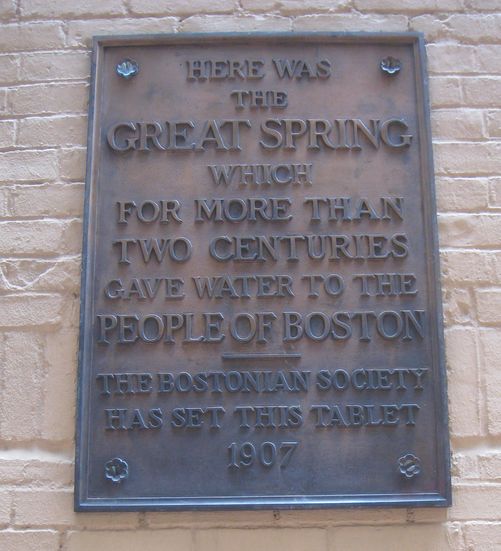 The spring can be traced back to the first English colonist to settle on Boston’s Shawmut Peninsula, William Blackstone. Blackstone arrived in the Plymouth Colony in 1623. While many of his shipmates returned to England, he stayed in the area and decided to settle in the Shawmut Peninsula living a life of solitude in the area of Boston which is now Louisburg Square. When the Puritans arrived in 1630 under the leadership of John Winthrop (who the Winthrop building is named for) to settle the Massachusetts Bay Colony, they decided to leave their settlement in Charlestown and settle on the Shawmut Peninsula because of the excellent water quality offered by Backstone’s Great Spring. The spring was fed by the region’s rich aquifers and supposedly, the name Shawmut from local Native American’s means the “land with living fountains.” The Great Spring became the center of the rapidly growing community and nearby, the colonists built their first church, market, prison, burying ground and governor’s house, all within proximity to this source of water.

In addition to the Great Spring, many homes had private wells and would also collect rainwater for re-use. In 1652, several families in the Dock Square area of the City formed a corporation and built the first actual waterworks in the U.S., the “Conduit”, which was a 12 foot square cistern structure that collected water from uphill sources through hollowed out sections of wood that served as pipes. The cistern had connections to some of the selected homes of members of the corporation. In addition to using the water for consumption, the “Conduit” was primarily used for firefighting and lasted into the 1700’s.

As Boston’s population continued to grow, it became clear that additional sources of water outside the city would be needed for Boston’s continued growth.  In 1796, the MA General Court granted a charter to the Aqueduct Corporation to provide the city water from nearby Jamaica Pond in West Roxbury. Laommi Baldwin Sr., a leading early civil engineering figure in Massachusetts, helped to design the new system and served as the lead engineer. This source soon too proved inadequate for the growing city and in 1840’s Boston finally instituted a municipal water system – The Boston Water Works.

The Great Spring was abandoned only be to be uncovered again in the nineteenth century and then paved over for Spring Lane. This location in a narrow back alley of Boston helped sustain the early settlers of our famed “city upon a hill.” Many thanks to Stephen Shea of Kleinfelder for providing some information on the Great Spring and to Marcis Kempe, formerly of the MWRA, and author of New England Water Supplies – A Brief History, where much of the information for this article was found.