Strategically located at the south end of Lake Champlain and serving as a check point between the St. Lawrence Valley and Hudson River Valley in upstate New York, Fort Ticonderoga served an important role in early American military history. The fort, originally constructed by the French in 1755 and named Fort Carillon, changed hands between the French, British, and Americans several times throughout the second half of the eighteenth century due to warfare in the region. Fort Ticonderoga is most famously known for its daring capture from the British in 1775 at the outset of the American Revolution by Ethan Allen and the Green Mountain Boys. Following the fort’s capture, its artillery supply was transported some 300 miles in 6 weeks across New England in the dead of winter. This force was commanded by Henry Knox and the relocated artillery supply was soon positioned along Dorchester Heights outside of Boston to aid in the siege of the British controlled city. With the new artillery in place, the British position became untenable, and they were forced to evacuate the city. This event is commemorated annually on March 17th in Suffolk County and is known as “Evacuation Day.” Today, the fort serves as a tourist attraction, an early American military museum, and a research center that is listed as a National Historic Landmark. 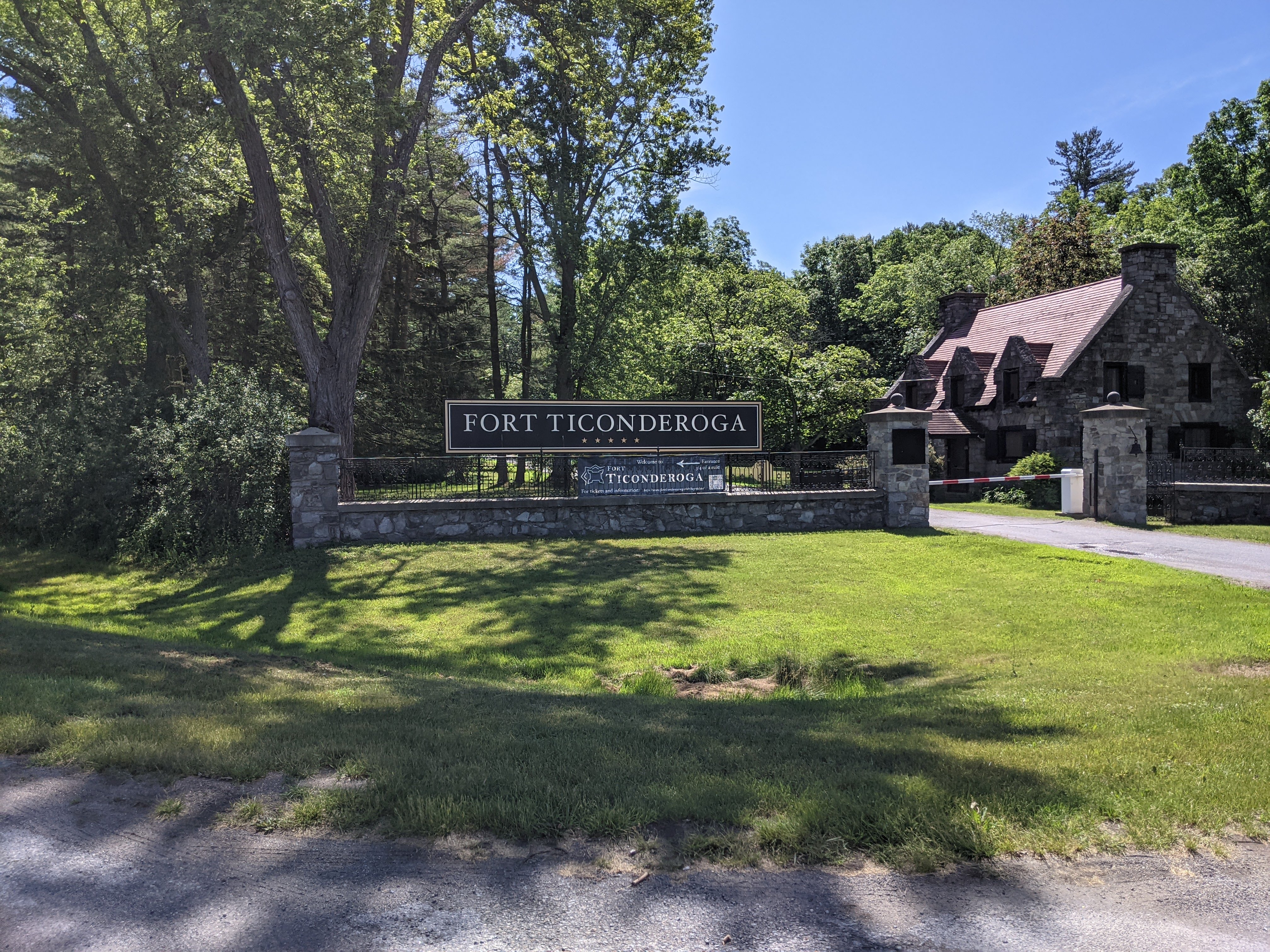 Construction of Fort Carillon began in October 1755 and lasted through 1757, occurring amid the French and Indian War where Britain and the American colonies fought France for control of North America. Construction of the fort was led by the French-Canadian military engineer Michel Chartier de Lotbiniere. Lotbiniere had been trained in France and based the construction of Fort Carillon on similar designs by the great French military engineer, the Marquis de Vauban, who served as a military advisor under Louis the XIV. The fort’s location served as a strategic checkpoint for controlling access routes between New York City, Montreal, and Western New England with its south and east side facing Lake Champlain.  The fort was rectangular with a bastion at each corner and two triangular ravelins, accessed via gangways that were each positioned to the north and west to help repel land-based advances. The corner bastions were used as storehouses, a magazine, and a bakery. Ramparts ran the length of the inner walls between the bastions and enclosed an inner courtyard accessed via a stone arch. The fort’s courtyard was also enclosed on three sides with two story barracks. 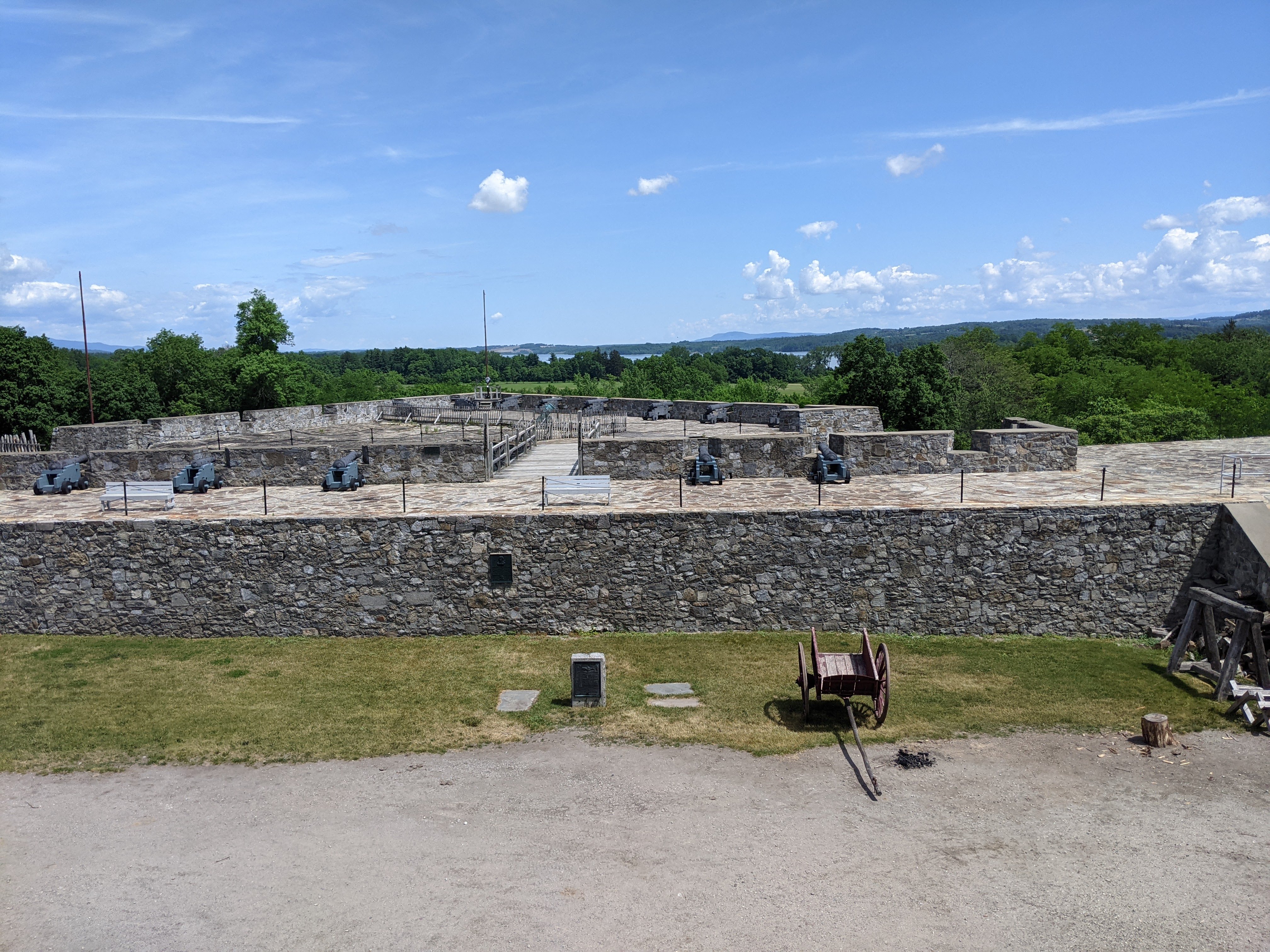 To construct the fort, the French first cleared the site, laid out the location of the ramparts, and then laid out parallel lines where the ditch would be located outside of the walls. French soldiers excavated soil from the ditch and placed it for the ramparts with timber revetments constructed to retain the fill. French soldiers had to rely on hand tools in use at that time such as shovels, axes, and other felling tools. As construction of the fort advanced, the French encountered significant limestone bedrock. They didn’t have masons with them that first year of construction and so they had to wait until the following year to underpin the timber walls when they cut into rock as deep as 15 feet. The interior barracks buildings were constructed of stone and quarried from cliffs nearby with mortar made from local limestone. 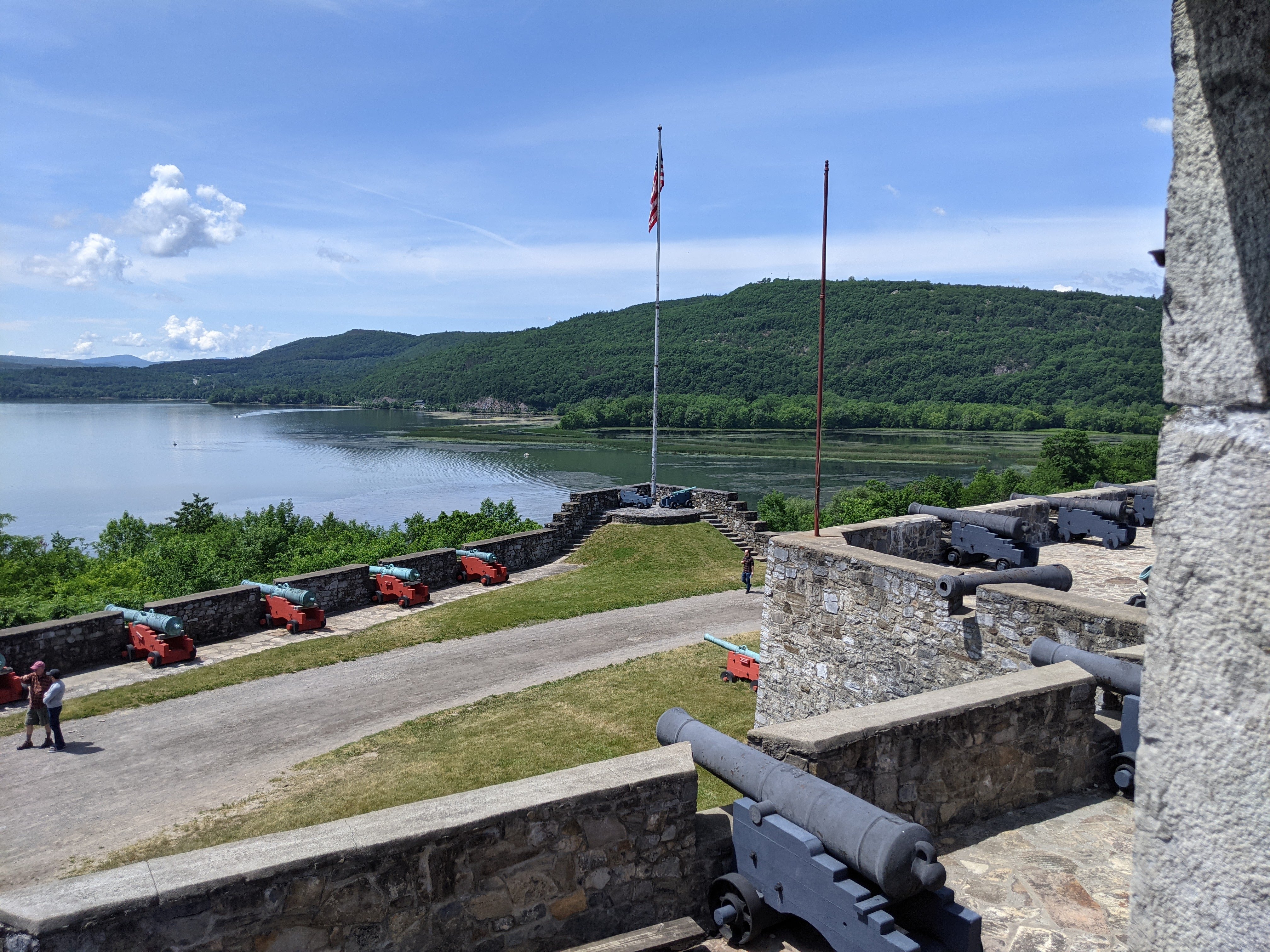 The fort was captured by the British in 1759 by a force led by General Jeffrey Amherst and renamed Fort Ticonderoga. Before departing, the French forces tried to destroy the fort using explosives, however, the British were able to make repairs. Despite these repairs, the fort saw little action for the remainder of the French and Indian War. Following the outbreak of the American Revolution and the capture of the fort by American forces, the fort was then used as a staging ground for the failed invasion of Quebec. The British would eventually retake the fort, only to abandon it following the Saratoga campaign due to shifting military strategies. 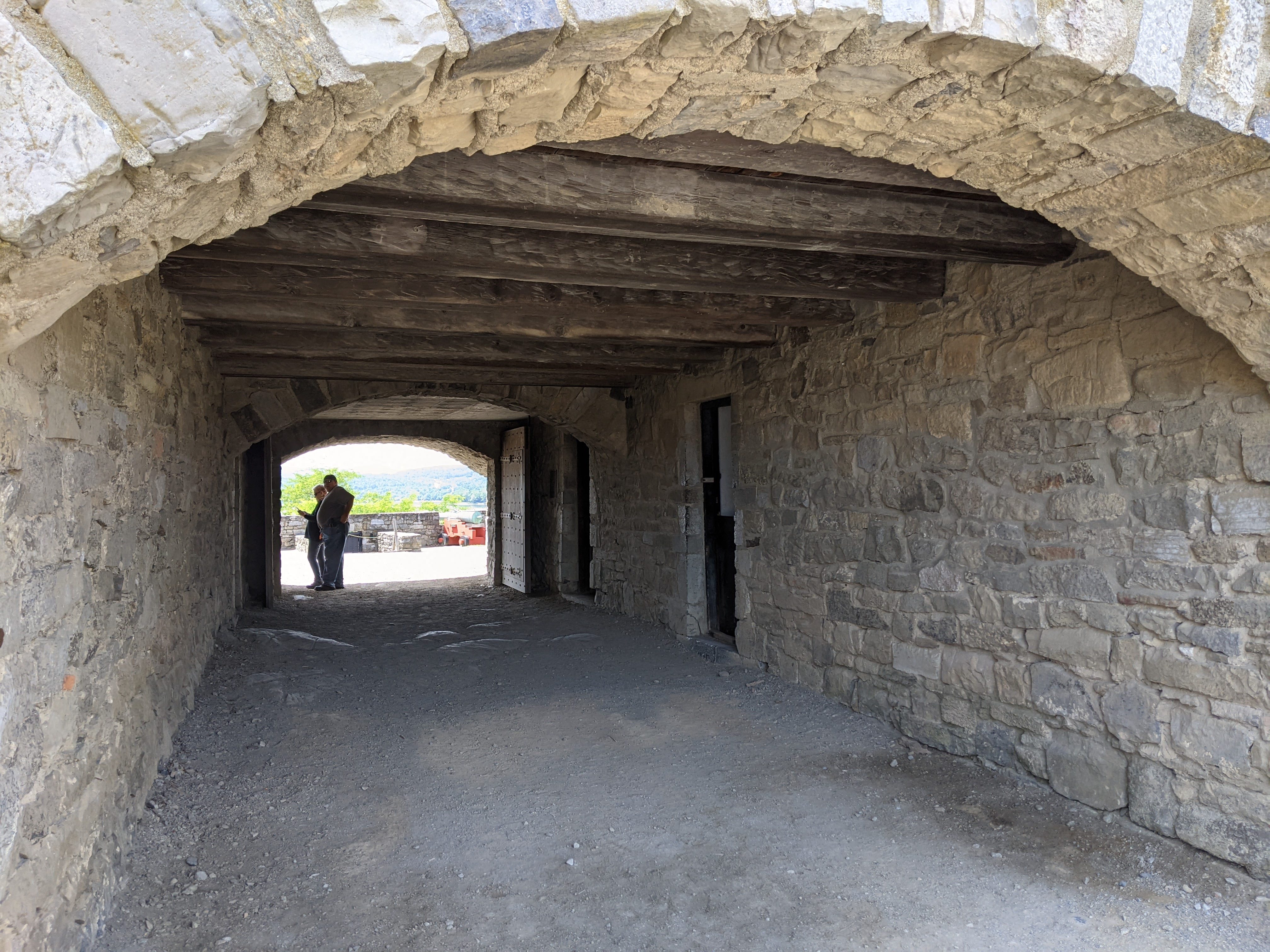 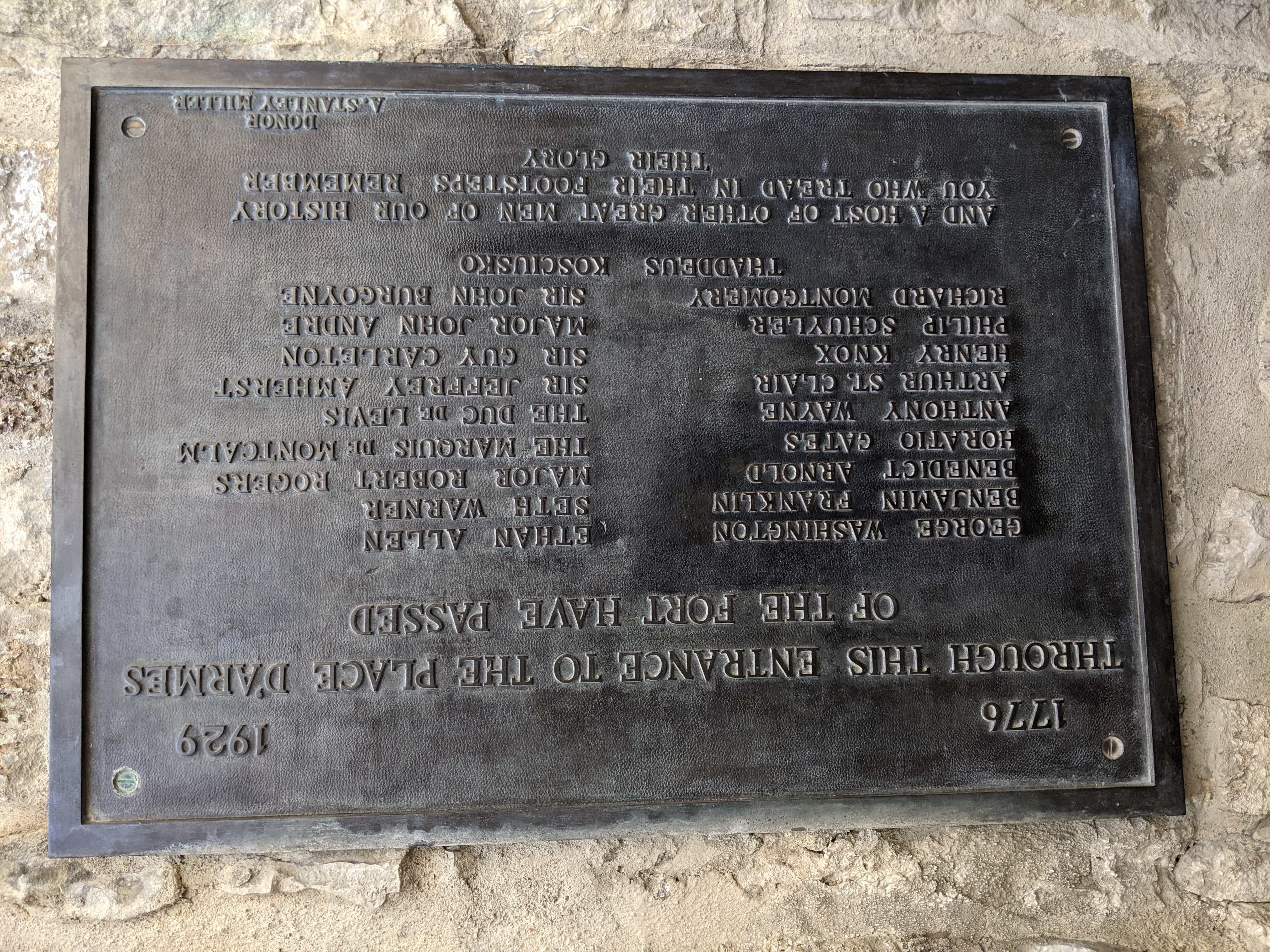 During the American occupation of the fort, a 1500-ft long log bridge was constructed across Lake Champlain to connect Fort Ticonderoga to the defensive fortifications on Mount Independence. The bridge was used to connect the fortifications and stop British vessels from accessing Lake George. The bridge consisted of 22 sunken timber piers with floating timber spans fastened by chain to the piers. The sunken piers or caissons were made of tree trunks, approximately 20 to 25-ft long and 8-in diameter placed together to form a square and then filled with stone. Remains of the sunken piers were still visible in the 1880’s and were a navigation hazard at the time but are no longer visible. 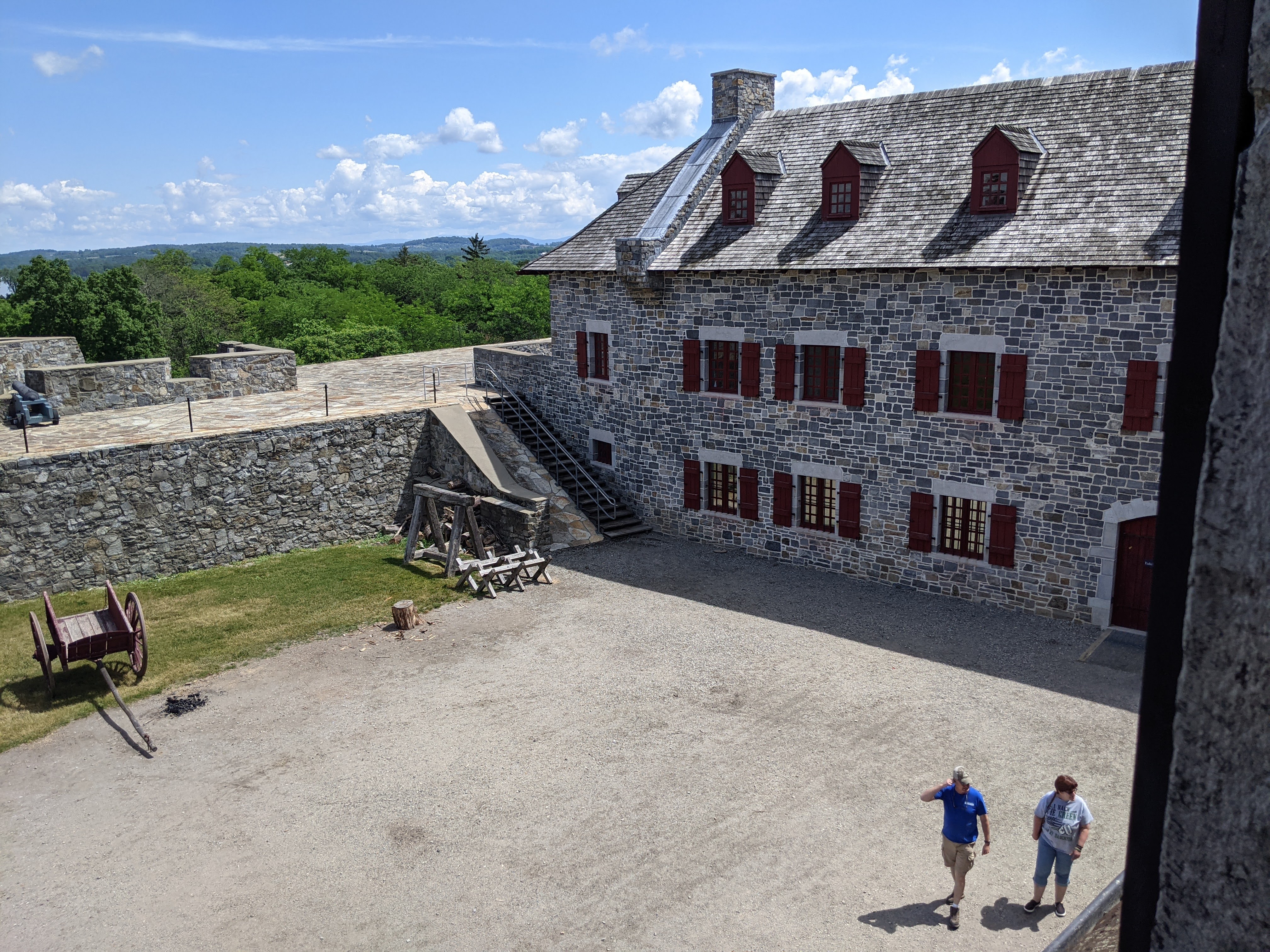 Following the American Revolution, the fort was abandoned and many of the fort’s stones were stripped by nearby residents. In 1785, the fort became the property of the State of New York and was eventually donated to Columbia and Union College in 1803. In 1820, the fort and surrounding land was purchased by William Francis Pell, who wanted to preserve the site for historic purposes. The fort stayed in the family for several generations and inn 1908, Pell’s grandson Stephen, embarked on a major restoration of Fort Ticonderoga including a progressive stone reconstruction of the fort’s ramparts and barracks. The reconstructed fort is located on the original 18th century foundations and still utilizes parts of the original walls. Original construction plans were even used to reconstruct the barracks. Today, the fort requires continual upkeep due to the harsh New England freeze and thaw cycles that deteriorate stone masonry. Many thanks to the Curator of Fort Ticonderoga, Matt Keagle, for taking time to discuss the original construction of the fort.