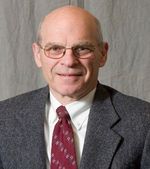 BSCES News had the opportunity in November to interview Professor Lewis Edgers, BSCES and ASCE life member, Tufts professor emeritus, professional engineer, research fellow, and most recently BSCES honorary member.  Although his focus has nominally been in the geotechnical area, he is quick to point out the synergies not only in multiple civil engineering disciplines, but also in professional, educational, and community activities that still keep him engaged after 55 years in the field.

Professor Edgers has a quick wit and generous conversational style that makes a one-hour Zoom interview feel intimate and much too short.  The subject of Coronavirus quickly came up.  He noted his confidence in science, and its ability to address many of the world’s issues.  At the same time, he acknowledged strong differences in beliefs that he hasn’t seen since the Vietnam era in the U.S.  One is left with the sense that while there is much work to be done, we have been here before.  And engineers can help lead the way forward.

In a broad context Professor Edgers considers himself part of the third generation of geotechnical engineers that developed in the twentieth century.  Karl Terzaghi and Arthur Casagrande at Harvard were the early pioneers. During this period, geotechnical engineers provided their services in support of other disciplines such as structural engineering. The second generation consisted of small geotechnical partnerships, with very close relationships with the area’s universities, and with a growing sense of business fundamentals.  Haley and Aldrich (1957), Goldberg, Zoino, and Associates (1964), and GEI Consultants (1970) among others all fell into this category.  These firms then hired a generation of engineers who have now mostly retired but spent their careers developing the broad geotechnical practice as we know it today.

The institutional link between the universities and local firms was BSCES.  Boston-area professors and their students shared the latest geotechnical research with local engineering firms, who in turn, grew in size and stature, and hired local students.  As a Tufts undergraduate, Professor Edgers attended the Fall 1965 Soil Mechanics Lecture Series.  Lectures were given by engineers who founded some of the firms previously mentioned.  The following spring, Professor Edgers met Dr. Harl Aldrich at the BSCES annual meeting, which led to his first summer job.

This first interaction led to an ongoing relationship with BSCES that has lasted nearly a third of the organization’s 172-year existence.  Over the following 55 years, Professor Edgers has been a member, BSCES Journal editorial board member, President, TECET Trustee, Life Member, and Honorary Member.

Professor Edgers took teaching and mentorship to heart and in 1967 started a faculty relationship with Tufts University that continues today.  Over the course of the following 45 years he was an instructor, assistant professor, associate professor, professor, civil engineering department chair, and associate dean of the School of Engineering.  He is now Professor Emeritus in the Civil and Environmental Engineering Department.  Professor Edgers feels that he had the best possible job, enrichened by his associations with civil engineering practitioners, faculty colleagues, researchers, and of course the students who taught him so much. Some of his favorite experiences during this time were extended leaves as a research fellow at the Norwegian Geotechnical Institute.

In his retirement Professor Edgers has enjoyed Tufts “Travel-Learn” trips, visiting the Panama Canal, Japan, Norway-Scotland, France, and Belgian-Dutch waterways.  In each case he has had the opportunity to speak on technical topics and learn from other engineers from around the world.

So, after half a century in the profession, how does Professor Edgers see himself?  He points out, “at a very basic level engineers use science and technology to solve problems.” Design of buildings, bridges, tunnels, and roads has changed over the years.   The effects of earthquakes, floods, droughts, and landslides, complicated by global climate change, strongly influence the design process.  Work he did early in his career relating to stability of offshore oil rigs is now being reused in the design of offshore wind turbines.  While the engineering fundamentals change slowly, the tools that engineers use have changed rapidly. He does not miss carrying around his orange-cased slide rule clipped to his belt.

Professor Edgers has been involved in his community of Brookline, serving as a Conservation Commissioner, helping to found Friends of Lost Pond, and as a Trustee of the Brookline Conservation Land Trust (BCLT).  He has been on various municipal ad-hoc committees such as the DPW Garage Siting and Landfill Redevelopment Site Study.  He is presently on the search committee for Brookline's Director of Engineering and Transportation. He is the Past-President of Temple Emeth, Brookline, and Director of the Nehar Shalom Community Synagogue.

In closing we came back to where we started, with well wishes for family and peers during the holidays and COVID crisis.  Professor Edgers reiterates his enthusiasm for and faith in science and technology as he looks forward to a time when engineers and scientists among others have completed and successfully administered a vaccine, and we can once again meet in person.